Following our review of the excellent PDP Level 50 Wireless Headsets for both PS4 and Xbox One, it is time to take a look at something else that I feel most gamers would benefit from, the PDP range of wired controllers for Xbox One. I am taking a look at the PDP Afterglow Prismatic Wired Controller for Xbox One and Windows 10 PC. 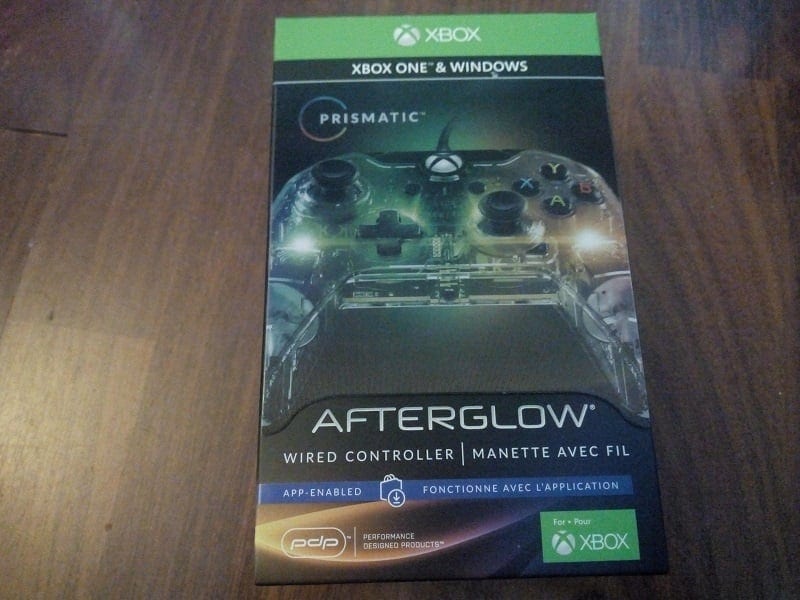 When I attended the PDP Winter Showcase for their range of products, it was the wired controllers for the Xbox One that really grabbed my attention. The Afterglow Prismatic Wired Controller stood out because it was one of the nicer RGB focused wired controllers I have seen on the market, PDP Gaming also do a similar controller for the Nintendo Switch, but for the Xbox One and Windows 10 PC,  it just looked really smart and again, the focus on common sense features really made this controller jump out at me. So let’s take a look at what to expect from this controller once out of the box:

Having a go to spare controller is really a must have for all gamers, either just to have as a backup controller or one for a younger gamer if you perhaps do not want them handling your more expensive controllers. If you are to have a wired controller, why not have that extra little element of showmanship which is where the Afterglow Prismatic wired controller comes in, offering all the benefits of a wired controller but showcasing an extra sense of flare to your gaming.

Though a little more expensive than the main range of PDP Gaming wired controllers such as the ‘Stealth Series Phantom Black’ that I reviewed previously, the Afterglow Prismatic controller still retains the same extra tier of common sense functionality that is central to their range both visually and in how it functions, to make them your next purchase. The transparent casing lets you see all the inner workings which is something I have always been a fan of when I look back and get all nostalgic over the fact my first ever Xbox console was the White Crystal OG Xbox bought alongside HALO 2 on its launch. Which ever able you look at the controller, it just looks lovely and fresh.

It is a very light controller due to not having all the technical hardware for Bluetooth and wireless as well as not having a traditional battery pack due to being a wired controller. This can take a little while to get used to if you have not used a wired controller before. This is something I think makes this a great controller for a younger gamer in your household potentially but it can feel a little fragile in an adult’s hand. The 10m cable is very generous allowing use quite far away from the actual console as well but of course, not as wide ranging as a wireless controller. Simply plug the cable into any USB port on your Xbox One OG/S/X console and the controller is ready to go with the profile you have signed in as on the console. The Xbox button on the controller will bring up the guide for normal Xbox guide button service though I did find I had to mash down a little hard to get it to respond. The thumbsticks feel really great as well as do the face buttons on the controller. Triggers and shoulder bumper buttons also felt very responsive and didn’t have that cheap springy feel or sound that other wired controllers can suffer from.

Where this controller does stand out is how it allows the user to customise the RGB lighting to give it a very personal colour scheme. The same button that allows users of headsets to utilise added functionality for audio controls via the controller which is placed Just below the right thumbstick is a clever little button, tapping it twice will mute your headset, holding it down and pressing left or right on the D-Pad will raise or lower volume levels or by pressing up and down it will adjust game and chat voice mixer levels. But holding down the button and moving the left stick will change the colour of the prismatic RGB lights inside the controller, and by simply releasing the button, the controller will remember that colour choice and even if you power down or unplug the controller from either an Xbox One console or Windows 10 PC/Laptop, the controller will remember the colour that was chosen.

It just makes this wires controller look stunning, especially if played in the dark and  I really found the extra ability to give audio controls for a headset,  to be a nice sensible addition to the controller features, especially as someone who for a good portion of the time when I game, I am using a set of earbuds instead of a headset, which just happen to have no inline controls on them, which now with this wired controller, I actually can. PDP Gaming’s focus on common sense features is something that impressed me with their range of headsets and by including it with their wired controller range really does help and offer something extra that other brands do not.

The full-on PDP Gaming Hub app that you can download on both your Xbox One console and Windows 10 device will allow you to do a variety of things with the controller. This is a free app to download and it allows you to not only calibrate the thumbsticks to a setting you prefer but also to remap buttons as well as running diagnostics in case you fear something has gone wrong with the controller allowing you to get the help you need from support much faster by actually being able to test the controller yourself with the hub. The App will even auto detect the controller you have and after using it to test and set up the Phantom Black Wired controller, just plugging in the Afterglow Prismatic controller immediately came on screen with the app which proceeded to update the controller firmware. The App also allows you to set the colour scheme of the controller as well as all the other settings for those really looking to fine tune the colour of the RGG lights a little more. Being able to set a profile of sorts by setting the audio levels I want from my headset with the controller, to remapping the buttons should I need to is something I would never have expected to be able to do with a simple wired controller.

I really liked the Afterglow Prismatic wired controller, visually it looks great and performance wise it held up really well with the heavy-duty games I play on Xbox One from Borderlands 3 to COD Modern Warfare to fighting games like Mortal Kombat 11, actually quickly setting its colour scheme to match my favourite fighters Sub-Zero and Scorpion. While like the Phantom Black wired controller, it will not replace my main controller but as a backup and spare, this is fantastic to have alongside your console or Windows 10 laptop or PC.

This would also make a superb stocking filler for any gamer you know approaching the holidays, with the functionality and build quality you get for the price, the PDP gaming range of wired controllers really stand out for me with the Afterglow Prismatic wired controller just jumping out with a level of style and flare any gamer would appreciate to have and use.