We are pretty much right in the middle of silly season when multiple big-name AAA titles are all releasing on a weekly basis so it is quite easy to miss out on some hidden gems amongst the indie titles also struggling to get the attention of gamers. One such title is A Knight’s Quest and it has absolutely charmed the cosy socks right off me. Just from the trailer this had a real Zelda adventure game kind of feel and the moment I pressed start I knew I was in for something rather lovely.

From the very beginning you can get the feeling that this is a game very much inspired by such adventure games like Zelda and even Spyro in how it brings its world to life. Players take the role of the clumsy would be hero Rusty, supported on radio by his friend Valy. We find Rusty exploring some old ruins with his trusty Wooden sword and shield hoping to find something incredible to prove he is a true heroic adventurer. But in all stories of would be heroes too quick to find fame and glory, Rusty unwittingly releases an unknown evil into the world, that scares the towns people and leads to the Mayor, and Rusty’s own father, giving him a quest to go into the world to find the three Spirit Knights of Legend and to bring them back to stop this new menacing evil in the world. Sounds pretty simple right?

What makes A Knight Quest both adorable and frustrating is that this is essentially a Zelda game on a budget but you would not tell by the games beautiful musical score is which is simply one of the loveliest composed music for such a game, you can get lost in score alone as you explore the world. Character dialogue comes in the form of pure text boxes, and whilst it is a shame that the characters were not voiced, hence Zelda game on a budget, the humour and almost borderline parody level of comedy threaded throughout allows for every character’s personality to shine through the words. There are times when the humour can fall a little flat and some interactions such as using the shops at one stage of the story, could really have been shortened with less text exchanges. 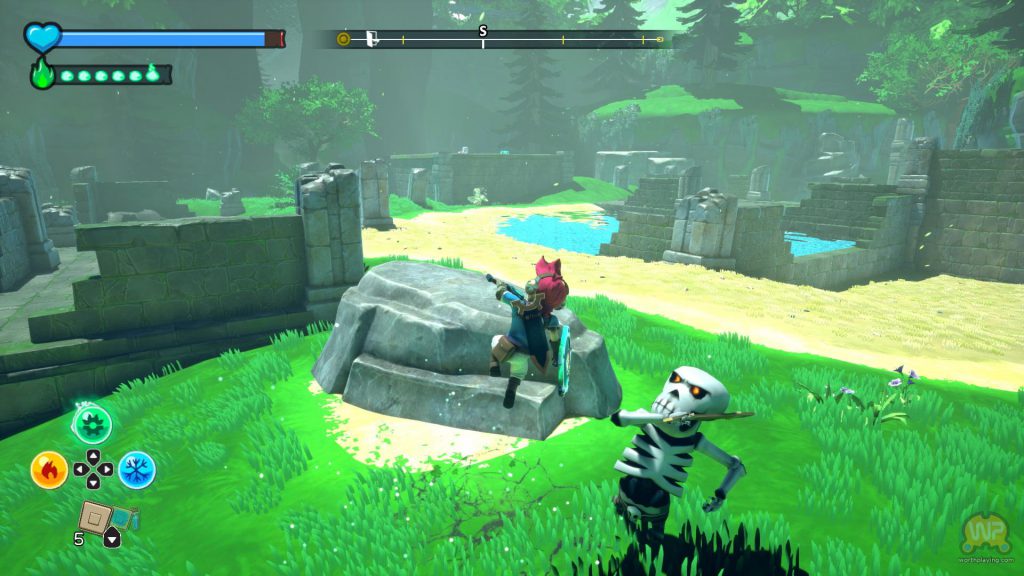 Combat is kept rather basic to begin with but the parry system works rather well although the guarding system which is paired with the enemy lock on system can become more of a nuisance when facing multiple enemies as the camera can lose tracking far too easily making it almost pointless. The combat does start to change up a little once Rusty starts to encounter the Spirit knights and ultimately take on their weapons for himself through the story. Each represents a different element starting with wind then fire and finally ice. Wielding each weapon will give Rusty the ability to use a magic attack of that element. Enemies are fairly standard melee enemies though some may be shielded until you use the correct elemental attack to break the shield to make them vulnerable. The downside to the magic attacks is how they often feel weak when used against enemies almost to the point where their only real use comes in removing an enemy shield or in solving the puzzles which I will come back to a tad later on.

The game uses an open world structure however it will have limited progress until certain abilities have been obtained exploration story progression and quest completions. This gives a certain level of in that players will want to return to earlier areas in the game once why have a new skill or Spirit Knight weapon and magic to use. Something I did enjoy about this game was in the level designs and the puzzles whilst not Mastermind level of complexity, there is a very nice feeling of satisfaction when you do work out what you need to do from simply completing one of the many “run to the big red flag” race mini quests you can do or one of the much lager main quest puzzle areas required to complete a certain task. 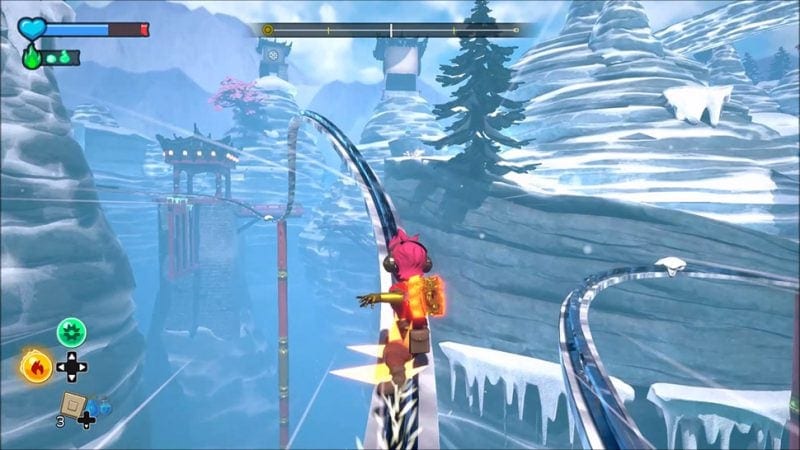 Sadly, this is also where the frustration with the game comes in as the controls and movement animations can prove to be so clunky and clumsy at times that you are instantly reminded that this is an indie game by a small development team. Navigating certain area might require precise jumping or wall running which can often fail to execute correctly even if the player has done the button prompts as required. When the controls do mess up and you fall when Rusty should have easily grabbed a ledge or when trying to move a block in order to solve a puzzle and the game refuses to complete the animation because it still thinks you have a weapon in your hands made me take a good few deep cleansing breaths before trying it again.

Overall the things that make A Knight’s Quest so very charming manage to save it despite its frustrations. It is just a lovely world to be in and such a change in pace from the big heavy hitter games that I have been playing recently. It serves as a reminded that indie games deserve some spotlight and attention even if the more famous AAA titles are landing every other day at this time of year.

Though it does not quite get everything perfect, what it does deliver is a rather lovely and fun experience that fans of Zelda like games will appreciate and enjoy and my hope is that updates post release can address the few quality of life issues stopping this from as good as it can and should be.