Back in November we introduced you to a company called Gamtel who had developed an Android controller. Now they have announced support for iOS devices too. 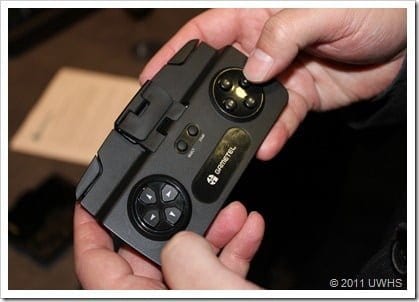 We really liked the controller and it worked very well – we are looking forward to trying it out on iOS.

Alongside these retro titles, other selected iOS games, such as No Gravity, Silverfish, Super Crossfire HD and Terra Noctis, are also available to download from Apple’s iTunes App Store.

Bo Nyman, CEO of Fructel says: “Gametel has proved popular among Android users but we’re pleased to bring support for the Apple iPhone and iPad. Now users can experience even more immersive gameplay using the Gametel’s console-style controls – freeing the touchscreen from fingers.”

Gametel connects to the device via Bluetooth while a built-in adjustable spring-loaded clamp allows secure docking of any Android handset and iPhone. Once paired the Gametel automatically connects to the device every time it is powered on.
With a familiar controller design, Gametel’s D-pad, quartet of buttons and two shoulder triggers replicate console-style gaming controls; an impressive nine hour battery life provides more than enough playing time for long journeys and weekly commutes.

Andrew Edneyhttps://moviesgamesandtech.com
I am the owner and editor of this site. I have been interested in gadgets and tech since I was a little kid. I have also written a number of books on various tech subjects. I also blog for The Huffington Post and for FHM. And I am honoured to be a Microsoft MVP since January 2008 - again this year as an Xbox MVP.
Previous articleAmazon’s LOVEFiLM Expands Content with ITV and BBC Worldwide Deals
Next articleXbox LIVE Mobile Games Coming to iOS?