Introducing the Renault FRENDZY – A Fully Fledged Office on Wheels

Ahead of the 64th Frankfurt Motor Show, Renault revealed details of its latest concept car, FRENDZY. And they describe it as a fully fledged office on wheels! 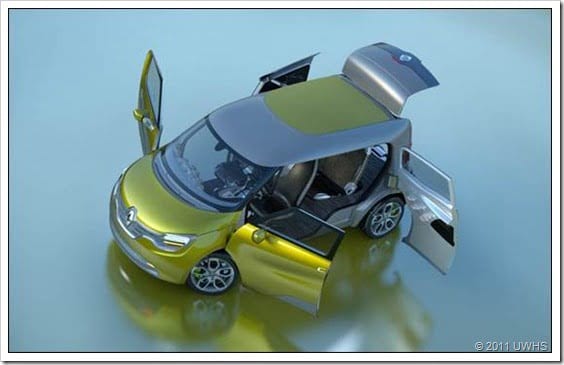 The FRENDZY looks very futuristic (well it is a concept car), but what makes this so interesting is that a Blackberry PlayBook is right there in the center acting as part of the dashboard! As it is a concept, don’t expect to see it in your local showroom just yet! Read on to find out more!

Here is what Renault said:

After the notion of ‘love at first sight’ expressed by DeZir, discovering the world with Captur and the establishment of a family with R-Space, FRENDZY presents the world of work. It is the fourth step in Renault’s design strategy based on the different stages of the human life cycle.

The latest concept car to be produced under the leadership of Laurens van den Acker is the perfect multi-talented vehicle. As a commercial business vehicle which can double up perfectly as a comfortable passenger car, it meets the requirements of business users on the one hand and those of families on the other. 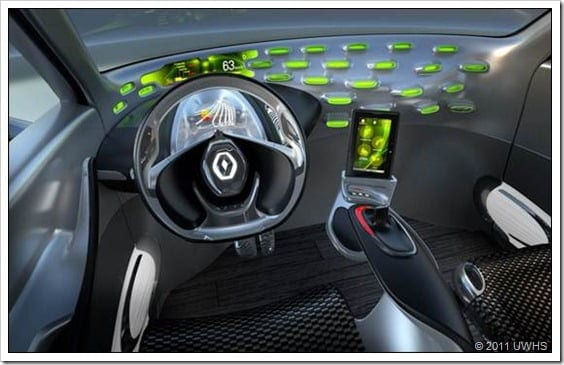 The user-friendly layout of the driver’s environment and tablet turn FRENDZY into a truly interactive and communicative tool. The BlackBerry® PlayBook™ tablet recently launched by Research In Motion (RIM), plugged into the dashboard, has enabled the concept of an office on wheels to become reality. BlackBerry PlayBook is ultra-portable (seven-inch touchscreen, 425g in weight, measuring 130mm x 194mm x 10mm), yet it delivers advanced performance, uncompromised web browsing with support for Adobe® Flash®, HD multimedia, advanced security features and out-of-the-box enterprise support.

BlackBerry PlayBook can allow users to benefit from an effective workplace and unrestricted mobility while on the go. This makes it particularly well suited to neighbourhood deliveries and local craftsmen, for whom it is a genuine work tool, both inside and outside of the vehicle.

The tablet connects directly into the centre console, ensuring perfect convenience of operation once on the move. As soon as it is plugged in, it becomes an integral element of the vehicle and configures itself into the Renault environment. Continuity of work is assured once the device is removed, and it can of course be used for all of the renowned BlackBerry PlayBook tablet features.

The device has an important role to play, too, in the customization of the vehicle as it controls the exterior screen while the vehicle is in motion and when parked, for business as well as for personal uses – pictograms illustrating life with electric vehicles, or the viewing of a film, for example.

Sensors located on each door sill log the loading or unloading of packages equipped with RFID (Radio Frequency IDentification) chips containing key information such as destination address, weight and dimensions. This gives users a real-time inventory of the goods being carried in their vehicle. In addition, tradesmen can automatically calculate or re-calculate their itineraries on the basis of this information.

Andrew Edneyhttps://moviesgamesandtech.com
I am the owner and editor of this site. I have been interested in gadgets and tech since I was a little kid. I have also written a number of books on various tech subjects. I also blog for The Huffington Post and for FHM. And I am honoured to be a Microsoft MVP since January 2008 - again this year as an Xbox MVP.
Previous articleRecord HD Content Directly to your PC with the Hauppauge Colossus
Next articlePerfectDisk 12 Updated – Now at Service Pack 1

How to Restore a Classic Car

If you’re a car enthusiast, you might have thought...
cars

How to Customize Your Car

Having a car can provide a great sense of...
cars

Here is are review of the new Garmin Dash Cam 67W.
Gadgets