4K Sectors and the Future of Hard Drives

You may have heard about 4K sectors on new hard drives and want to know and understand more – then this video is for you.

RAM TV have posted a short, but very informative video on 4K Sectors. 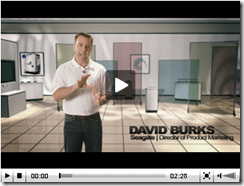 Here is how RAM TV describe it:

Over the past 30 years, hard drives have gotten bigger and faster. Interfaces have changed – I remember back to MFM and RLL. But the logical block format size know as a sector has remained at 512 bytes.

That is changing. Hard drive companies are migrating to a larger, more efficient 4096 byte sector size, generally referred to as 4K. That may not be something a user sees results in short term but in the long term, it should lead to higher densities and capacities.

Generally, manufacturers will be transitioning  to 4K technology over the next 12 months but it’s important to understand the potential short term negative effects resellers could encounter and how companies like Seagate have developed technologies to make that transition smoother.. We set David Burks down in front of a camera to explain.

Here is the video from RAM TV.

This really is worth the few minutes of time it takes to watch the video. There has already been scares about advanced format drives, and a lot of misunderstanding, so it is good to see very clear information being presented. Sooner or later we are all going to buy a new hard drive and it will be one of the newer advanced format drives, so its good to understand now what it means.

Seagate also have a great 4K Sector Hard Drive Primer which is worth a read as well.

So what are your thoughts on these new drives formats?

Andrew Edneyhttps://moviesgamesandtech.com
I am the owner and editor of this site. I have been interested in gadgets and tech since I was a little kid. I have also written a number of books on various tech subjects. I also blog for The Huffington Post and for FHM. And I am honoured to be a Microsoft MVP since January 2008 - again this year as an Xbox MVP.
Previous articleTwonkyServer and the New Xbox 360 Slim Video
Next articleReview of the Iomega USB 3.0 PCI Express Adaptor