With the launch of a new ad campaign and a long awaited “update” to their software scheduled for beta release tomorrow, Microsoft has pre-shipped a special edition Monopoly game to its WHS MVPs. Guess who writes for a site run by a MVP?

I was fortunate enough to get a hold of a pre-ship(sale?) unit and can post some information on it since I am not on a NDA. I guess that at MIX10 they had a small table with a couple of cases of these and my favorite MVP had one sent to me by his web developer friend. I just got it today, someone transposed my ZIP, thanks Andrew :-(, and wanted to get it out before Microsoft’s Q3 release tomorrow. 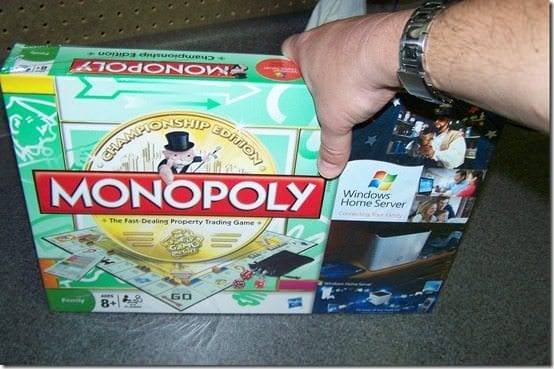 Do not know if the wife will want to play it but I am sure I can get the neighbors in on it if I buy the beer!

Obviously this was an April Fool, which is a shame because how cool would WHS Monopoly be?

Timothy Daleohttp://usingwindowshomeserver.com
Timothy Daleo is a Project Resource Analyst and Oracle Applications Trainer in Pasadena, California. In addition to financial analysis, Tim has been developing training materials since 2003 and supporting direct projects through various auxiliary databases since 2005.
Previous articleengadgetHD review of the Ceton InfiniTV4
Next articleThe Media Center Show Podcast 250