Windows Home Server is a fabulous product, the way it stores your data across multiple hard drives in order to provide resilience and a measure of ‘peace of mind’, unfortunately from time to time checking the distribution of your data across these disks using the Disk Management Add-In you may see that newer hard drives, that you’ve added, are not being made full use of when storing your data.

This is where Drive Balancer comes in, it is Home Server Add-In that is designed to evenly distribute your data across your WHS pooled hard drives regardless of the space or number of drives available. It is not a WHS Add-In in the traditional sense in that it does not integrate into the Windows Home Server console instead it is run from directly on the Home Server in a command prompt window.

Perhaps future releases will result in this being a true Add-In as but the application is fully functional and that’s exactly what it says ‘on the tin’ as is.

First a little background, when I built my Windows Home Server, way back in November 2007, I used three 320 gigabyte hard drives as the storage pool. However since that time and I have added two 750 gigabytes and two 1 TB hard drives too much storage pool.

The image below shows the distribution of data on my Home Server before running Drive Balancer, as you can see most of the data was spread across disks 1, 2 and 3, with some data spread across the disks 4 and 5 but it isn’t the best distribution as Disk’s 1 and 2 are nearing their capacity. 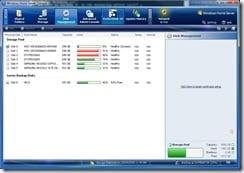 Unpacking Drive Balancer to “C:\TEMP” from its distribution zip file (like I said it’s not your typical WHS Add-in) I then connected to my Home Server via Remote Desktop (I could have also used the Advanced Admin Console to get a command prompt connection instead of Remote Desktop) and navigated to the “C:\TEMP” folder where I ran the Drive Balancer executable.

Drive Balancer asks a couple of questions before it starts and it uses the answers to establish whether it should include the Landing Zone in its work but also how it should distribute or balance the data in the pool.

Now before we proceed any further I’d like to try to put any concerns about what Drive Balancer is doing to rest. When I first saw the Add-in I was concerned that it was modifying data, moving things around and that something COULD go wrong that would result in the loss of data. From my testing and my investigation into how Drive Balancer works I am confident that it doesn’t actually modify your data, instead it creates temporary files and then calls upon the WHS Drive Extender Migrator service to do the actual work moving files around.

Safer with this knowledge that my data SHOULD be safe (remember things CAN go wrong (as with anything in life) and as a result you should heed the warning that running this Add-in is done at your own risk and that neither is the author nor Using Windows Home Server responsible if something goes wrong.) I pressed the ENTER key and let Drive Balancer do its thing.

Rumours that I ran and hid behind a heavy wooden desk at this point in a Pratchett-esque way are unfounded and just not true, I was in fact hiding from my wife who was not happy I had hidden the remote controls for the audio/visual centre so I could prevent her watching Twilight for the millionth bloody time.

Drive Balancer will then just run and it does take some time to run, the drive balancing of my WHS took about four hours to complete but the whole time the HDD Balancer Command Prompt on the server was telling me what was going on, not that I really understood what it was saying but so long as it was doing stuff and the percentages reported were increasing I was happy.

During the run you may see your Network Health change to Yellow/Red as well as the loading on the WHS Pool drives showing all of your disks filling up as the balancing is progressing. There is nothing to worry about this is expected behaviour, towards the end of my drive balancing my WHS showed the following: 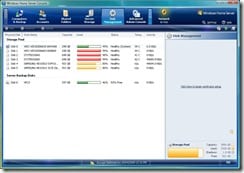 And before I took a trip to the do the shopping and hit the local computer stores the Used indicators were slowly increasing.

I returned from my shopping expedition to find that Drive Balancer had completed and I was missing a few hundred dollars as my wife had managed to find my wallet. Drive Balancer was a very polite Home Server Guest and cleaned up after itself by deleting all temporary files/folders it needed/used and checking the Disk Management add-in I was greeted by the following view of my newly balanced Windows Home Server:

As you can see Drive Balancer did a very good job of evening it the data that I have across all of the disks in my WHS Pool. I’m more confident now that should I lose a disk or two that my WHS will cope without loss of data.

Drive Balancer is not your everyday tool or utility, it really needs to be run by a technically competent person and it would be nice in the future if the Author or Microsoft would make this more user-friendly and remove the requirement to connect to the Server to run. That said, Drive Balancer does exactly what it says it does and does a very good job of it.

My shopping trip procured me a couple of Seagate Barracuda 1.5 TB Green SATA-II hard drives and it’ll be an interesting task to add these to my Windows Home Server and then run the Drive Balancer again…. keep an eye out for a review of the hard drive and an update on the Drive Balancing when it occurs.

Drive Balancer, version 1.05, by Beefcake, available to download from here.

Phil Bevanhttp://
An Englishman by birth Phil Bevan has since moved to Australia where he works as an IT Consultant. He spends a lot of his time as a Shoutcaster and Community Liaison trying to be the eSports equivalent of John Mottson.
Previous articleUsing Windows Home Server to upgrade your client hard drive on a Friday night
Next articleiStream for Windows Home Server

Ruin Raiders is an action-packed tactical roguelike, where players are tasked with gathering certain materials and completing hard hitting battles in order to progress....

Ruin Raiders is an action-packed tactical roguelike, where players...
Gaming

Let me tell you how it feels to play...
Reviews

Will you take the red pill or the blue...