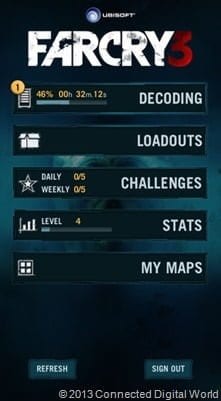 With this Far Cry 3 mobile app for Multiplayer and Co-op, players can decode the encrypted data found during game sessions to earn advanced weapon mods and customize their Loadouts on the go. Far Cry Outpost also allows players to track their progress through the daily and weekly challenges, check out their stats and compare with their friends, and keep track of the maps created via the in game map editor.

– Decode the encrypted data you find in game to unlock advanced weapon mods and earn bonus XP. Don’t wait until you’re playing the game to start decoding. Instead, decode on the go! Once you unlock a weapon mod, you can accept it, give it to one of your friends or sell it for more XP straight from your phone.

– View and customize your Loadouts so that you’re ready to play once you’re back in the game.

– Keep track of your progress through the Daily and Weekly Challenges. Completing these Challenges will earn you XP.

– Check out your personal stats and the stats of your friends, including time played, level, top weapons, awards and more.

– Keep track of the maps you’ve made in the Map Editor. You can follow the current tier placements and how many people have liked or favourited your maps.

New feature: The Grid! Play The Grid to unlock new encrypted data sources to decode, even while away from the game!
Fixed issue where Loadouts sometimes failed to appear
Fixed several crashes and bugs

Download for iOS from the Apple App Store or for Android from Google Play.

Andrew Edneyhttps://moviesgamesandtech.com
I am the owner and editor of this site. I have been interested in gadgets and tech since I was a little kid. I have also written a number of books on various tech subjects. I also blog for The Huffington Post and for FHM. And I am honoured to be a Microsoft MVP since January 2008 - again this year as an Xbox MVP.
Previous articleSony PlayStation 4 announcement tonight at 11pm UK time
Next articleSquare Enix announces Murdered: Soul Suspect