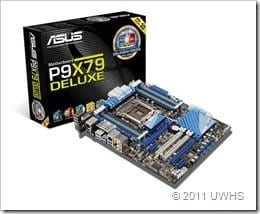 Here is what NVIDIA said today:

The combination of NVIDIA SLI technology – which allows for multiple GPUs to run on a single PC – and new X79-based motherboards allow gamers to customise their PC experience with up to four NVIDIA GeForce® GTX GPUs, including the GeForce GTX 580 and GTX 570, the world’s fastest DX11 GPUs. Licensed by the world’s leading motherboard manufacturers – including Intel, ASUS, ASRock, EVGA, Foxconn, Gigabyte and MSI, SLI technology is crucial for playing this year’s hottest graphics-intensive games, such as the recently released Battlefield 3 and upcoming Batman: Arkham City with detail, resolution and immersion settings cranked up.

“Falcon’s entire desktop lineup will be moving to Sandy Bridge-E, and NVIDIA SLI technology was an absolute necessity for every model we make,” said Kelt Reeves, president of Falcon Northwest. “It was critical for us to offer our clients multi-GPU options, and pairing Sandy Bridge’s monstrous new CPU horsepower with SLI’s monstrous graphics power will give gamers and enthusiasts smoother frame rates and a better visual experience.”

NVIDIA SLI technology is now available for all consumer-based desktop and mobile PC platforms, including previous versions of Intel Core i7, Core i5, Core i3, Core 2 Quad and Core 2 Duo processors, as well as those based on the AMD Bulldozer and Phenom II CPUs.

NVIDIA DX11 GPUs are designed to deliver the world’s fastest performance for DX11 games, and are the only consumer GPUs to feature multiple tessellation engines for advanced graphics rendering capabilities. NVIDIA GeForce GPUs also provide gamers with additional features not found on any other discrete graphics solutions, such as NVIDIA PhysX® technology for deeper gaming immersion, and support for NVIDIA 3D Vision™ technology, delivering eye-popping stereoscopic 3D on a single display or spanning across three screens for an immersive gaming environment.

I’ve only just built a new system – sounds like it’s time to build another one!

Andrew Edneyhttps://moviesgamesandtech.com
I am the owner and editor of this site. I have been interested in gadgets and tech since I was a little kid. I have also written a number of books on various tech subjects. I also blog for The Huffington Post and for FHM. And I am honoured to be a Microsoft MVP since January 2008 - again this year as an Xbox MVP.
Previous articleReview of the Lenovo IdeaPad Tablet K1
Next articleApple Releases iTunes Version 10.5.1