I had been wanting a universal remote control for sometime. Just to watch a DVD required three remotes and many buttons pushed to change settings for inputs and so on before I even could begin to enjoy the flick. Even if I wanted to just listen to the radio it was far from one click with one remote to hear the music. Universal remotes have been on the market for years and they all kind of, how do I put it? Sucked! Some giving a new meaning to the word. Just programming them was an exercise in patients and tedious. Clearly there had to be a better way. Enter the modern remote part of the modern digital connected home.

After some research reading reviews until I was blurry eyed I knew what I wanted and what the remote must do. It had to be easy to program using a PC, have a lighted key pad, control the six components in my house and have one touch operations. The last thing is it had to be easy to use, oh and not cost a small fortune. While I know there are many out now that can do some if not all of these things the Logitech Harmony 700 fit my budget and all of the things on my short list were checked.

As is popular for reviews of this nature it seems everyone likes to do the whole unboxing thing. Well here in the fasthair household about the only thing I care about is how easy and fast I can get it out of the box and start pushing buttons. As long as it’s not busted I’m a happy camper. 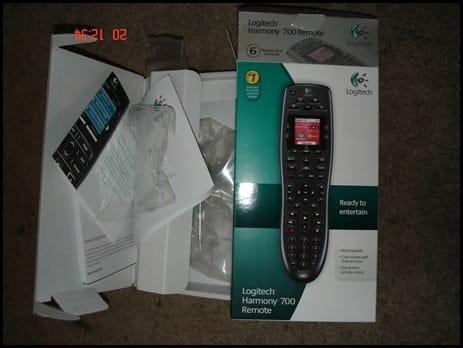 With that out of the way it was time to start pushing buttons. Install the included rechargeable batteries, connected the included USB cable and Windows 7 X64 loads the drivers without issues just the way it should be. Oddly enough there is no software setup cd. Are you kidding me? Dig out the quick guide (I don’t need no stinkin’ instructions!) to discover you must go to Logitech’s website and setup an account before they will even let you download the software. Are you kidding me? While I don’t mind having to go to the web to get the software, which is something I prefer to do so I have the latest and greatest stuff, but forcing me to create an account really kind of irks me.

With the software installed it it was time to get down to business of programming the 700. The first screen wants to check for updates for the remote and after few minutes the new firmware is installed and it is time to tell the remote the devices name and model numbers of all my stuff. This is where the setup really shines. Using easy to use drop down menus you click the brand of the device and then key in the model number. I was amazed at the database that Logitech has for hardware. Boosting 200,000+ devices in their database it was a real no brainer getting the devices programmed into the 700. All of the functions for 99% of my hardware worked without some much as tweaking a single setting. The 1% that didn’t work, and it came as no real surprise, was my remote for my USB TV tuner. The setup wizard even made learning from the remote used to control the USB tuner as snap to get basic functions programmed into the 700. That’s right, the 700 can even control my Media Center, just too cool.

With the basic functions programmed into the 700 it was time to move on to what was the biggest reason for choosing the 700, the one touch functions or “activities” as Logitech calls them. Activities do all of the things it took me three remotes and too many clicks just to watch a movie to do. Now with one touch of say the Movie button the 700 turns on my TV tuned to the correct input, turns on the sound system again tuned to the proper input and turns on the DVD player with the play command sent. There are four default buttons to program these activities which include Watch TV, Watch a Movie, Listen to Music and More Activities. This last item has six other default activities displayed in the color LCD screen. While it now takes two clicks to listen to say a CD it is a far cry from what it took before. This part of the programming does take a good bit of time and requires that you know how all of your components are connected to each other. All of these default buttons can be programmed for any function you may want. When you get done with this part you can do all the basic activities and can probably stop here. 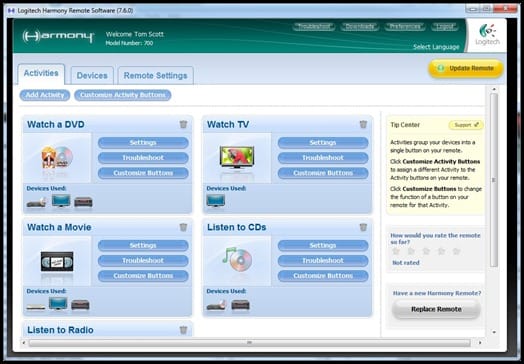 On the Device page you change the settings of each device to further customize their functions and learn some of the commands from your original remote for any device that Logitech may not have in the database. This was the case with my remote for my USB TV tuner. Again the wizard guides you through this and allows you to pick what buttons to do what function. I have of yet to get all of the functions and commands programmed into the 700 for the tuner. It is however easy to connect the 700 back to the PC and modify/add any one or more commands. This is the part that I’m not sure I will ever be done with. It’s not that it is hard to do, it’s just time consuming and the options seem almost endless on what you can do or change. This might be always a work in progress with such a highly customizable and high tech remote. I would much rather have too many option then come up short on choices. 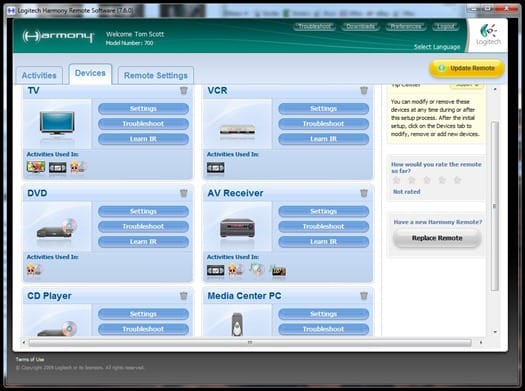 I have been more than satisfied with the functions of the Harmony 700 the few days I’ve owned it. However it does have a few things that seem real short sighted on Logitech’s part. First the remote does not charge from the USB port of the PC and must be plugged into the wall with the included adaptor that you plug the USB cable into. There is also no way to tell the state of charge of the batteries without plugging it back in to the wall. It would have also been nice to see a clock displayed on the LCD too. 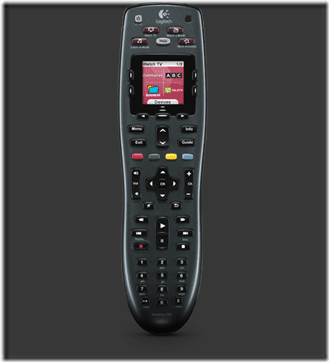 This last one really bugs me though and I can’t believe this slipped by the design team and it has to do with the lighted buttons on the remote. One of the cool things is the remote knows when you pick it up and lights up the buttons and the LCD display. What it don’t light up are the buttons you will use the most and they are the one touch and the sub-activity menu buttons. Basically all the buttons from the bottom of the LCD up are not lit. While it’s not a deal breaker and I’m sure I will learn the “feel” of where these buttons are it just baffles me that Logitech missed this in such a big way. While on the subject of feel. The 700 fits my hand with a nice balanced feel and the buttons have nice “soft click feel” to them for that positive feedback.

The unlit buttons aside the 700 is a more then capable of controlling its six device limit in ways you might not ever think of until you start to see just how much you can customize it to do. It sure beats the old days of remotes scattered all over the place. Short of the USB TV tuner remote I haven’t had to pick up one of the old remotes… yet. I’m sure a time will come when I need to grab one but then it is just a matter of connecting back to the PC and programming in the missing function. So yah the Logitech Harmony 700 is a keeper.

fasthairhttp://fasthair.blogspot.com/2009/03/youve-been-served.html
I
Previous articleLights-Out Windows Home Server Add-In Version 1.0 Released
Next articleLack of stock on HP MediaSmarts for the UK

One of the most powerful questions a...
Read more
Gaming