Review: Bloodstained: Ritual of the Night

The chances of ever playing a proper new Castlevania game are slim, but at least there are games like Bloodstained: Ritual of the Night to scratch the itch. There’s certainly potential given that former Castlevania series producer Koji Igarashi is part of the development team.

Compared to a Castlevania game, Bloodstained: Ritual of the Night is more or less a new entry in the series, but obviously isn’t so that Konami doesn’t have a reason to set the legal hounds loose. In this… spiritual successor a group of mages is annoyed that their research funding into the occult is getting cut off and decide to sacrifice humans combined with crystals that will enable them to set demons loose on the world. The plan goes more or less as planned, except for the part where pretty much every member of the group is killed and two of the human sacrifices survive the ordeal.

Now many years later one of the special humans becomes focused on trying to summon more demons and the other awakes from a coma and is tasked with stopping him. Miriam must explore another creepy castle full of demons in order to complete her task and save humanity. Bloodstained: Ritual of the Night’s castle is clearly the star of the show with its intricate layout and many rooms and paths waiting to be explored.

Despite the fact that Bloodstained: Ritual of the Night follows Castlevania’s winning formula, it still manages to make itself feel relevant in a way that is irresistible to not want to see all that it has to offer. In a way, it’s almost like an intricate love letter to the heydays of Castlevania that manages to invoke many of its best aspects. 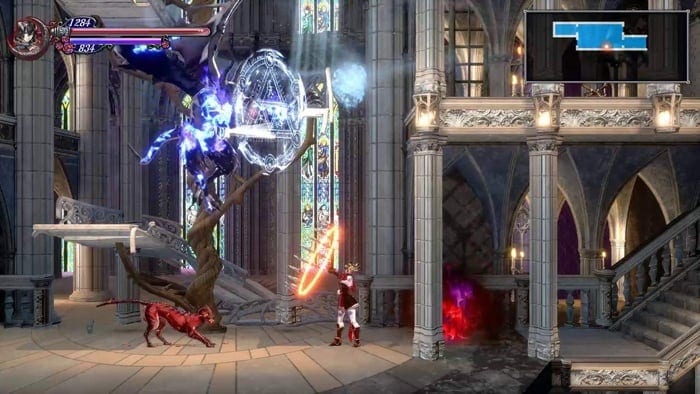 Although it must be said that the use of a harsh saving system could have been one aspect of Castlevania that Bloodstained: Ritual of the Night didn’t have to include. It’s a blessing that most of the saving rooms are usually located near boss rooms. Sadly, there are still very rare occasions where significant progress is lost when unusual behaviour occurs, such as a very rare software crashes. It seems that Bloodstained: Ritual of the Night isn’t quite as robust as Castlevania games and is prone to the odd serious issue and a couple of other minor issues that don’t have quite as much of a negative impact.

Not that these issues should deter anyone from playing Bloodstained: Ritual of the Night. It’s impossible to resist the lure of trying to find out every secret and exploring the castle. There’s certainly plenty for those brave souls out there to explore.

Whilst the character models are well detailed, the same doesn’t always apply to backgrounds. Like in Castlevania, there are distinct areas of the castle to find, but they don’t always feel as creative. On the bright side, each of these areas is usually populated with imaginative and unique types of enemies. Miriam’s unique gimmick is that she can absorb objects called shards that bosses and monsters (occasionally) will drop. Each of these shards gives her a new power and also will make it harder for her to not end up being swayed to the dark side. It’s an ingenious idea that gives players room to come up with their own tactics for each situation by making use of these unique powers. Add all the equipment and other items that is scattered all over the castle and it makes for a compelling reason to spend a lot of time making the best of these powers. Not to mention the fact that new powers and equipment acquired from defeating bosses also mean gaining access to more areas of the castle.

As if it wasn’t enough to find items, it’s also possible to create them and this also links in with the many quests given by eccentric characters that survived an attack on a village near the castle. It’s almost as amusing to entertain their many requests as it is to explore the castle to find every item that will make it possible to complete them. Sometimes a good dose of humour is just what is needed and Bloodstained: Ritual of the Night aims to please on a regular basis. 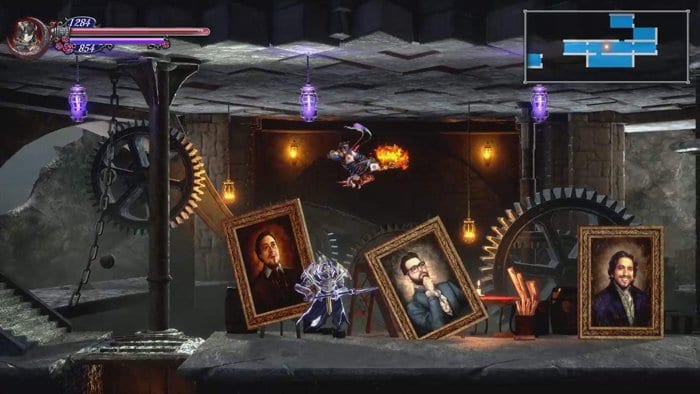 It’s not exactly a deal breaker and it might seem like an unfair comparison, but the controls don’t feel as smooth as those found in proper Castlevania titles. Such movements as sliding back and even trying to make use of the D-pad to move don’t feel as responsive. Which means that it can make it harder to face certain challenges than it’s supposed to.

What does cement this bold new take on a classic is the choice of music tracks that are played in each of the game’s areas. Each one manages to represent the theme of the areas or room that it’s played it.

It’s clear from the presentation of the game right down to the smallest of details that players can find, that won’t have any impact besides perhaps raising a smile, that a lot of thought went into developing Bloodstained: Ritual of the Night. Whilst there’s no denying that it has flaws, Bloodstained: Ritual of the Night still manages to make efficient use of what worked best in older Castlevania games to ensure that new and old fans can still be catered for no matter what happens to Konami’s genre defining franchise.