The PlayStation exclusive ‘Until Dawn’ was a title that took me completely by surprise. Horror games fail to have an impact on me, jump scares do not work on me and often I can find them rather tedious as you have to put up with forced elements trying to make you feel scared or terrified which always fail to work on me. Until Dawn however was a wonderfully written and executed mystery thriller which used player choice to completely direct the narrative with the very fate of the characters in the hands of the player. When I head that the team were working on a follow up, it certainly had my attention but the worry was whether or not they could recapture the magic of their first success.

Sadly that worry turned out to be a case a rather hit and miss experience with Man of Medan which is built upon the building blocks of Until Dawn and whilst it does manage to refine and even add some interesting new elements to the gameplay, it also sadly forgets a few part of the winning formula that made Until Dawn an unmissable title.

The story opens up with a little back story as meet two US soldiers at the end of WW2 out on a final night of shore leave, drinking a little too much before returning to their ship. This section is pretty much a very quick tutorial into how the quick time events and dialogue exchanges work so if you are unfamiliar with the core mechanics this will bring you up to speed and for those who did play Until Dawn it serves as a nice refresher. But it also encounters to perhaps the biggest character in the game and something that will return later in the story to really liven things up.

Once this prologue is completed, we then get to see the new characters and well, the first big issue with Man of Medan kicks in. One of the strongest elements to Until Dawn was in the large group of characters players were given to get to know with a stellar cast of voice actors who brought their personalities to life which was crucial because their performance helped forge the connection players had to them whether you felt sympathy or liked and disliked them. This connection is vital because it directly impacts the very choices a player will make to either keep them alive or to put them in harms way or in my own personal case, if a mistake is made that costs you a character that you actually liked. Where Man of Medan immediately drops the ball is in its own cast of characters a very small group of just five characters. 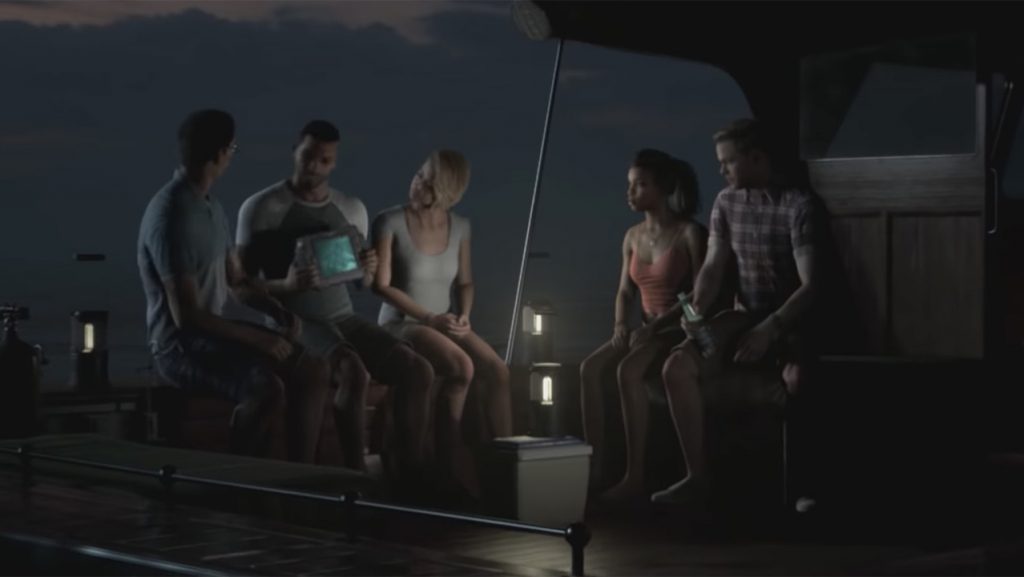 We first meet the brothers Alex and Brad as they are the first to arrive for their groups diving expedition and the clumsy use of generic stereotypes for the characters becomes abundantly clear as Alex is the athletic jock big brother character whist Brad is your very typical clean cut nerdy character who is clearly very smart but not very socially aware. Next up we meet Alex’s girlfriend Julia and her brother Conrad who both make it so very clear that they have wealthy parents. The big issue I have is that none of these characters are immediately likeable other than Brad but the lazy way in which he is presented was so off putting for me. To really illustrate just how jarring the voice acting is, even Sean Ashmore who voices Conrad, hams it up so much every chance he gets that even when Fliss the boat captain is introduced to complete the group, Ashmore delivers the most wooden performance when a forced scene of flirting between Conrad and Fliss is perhaps the most awkward scene of all.

That is where Man of Medan falls down the most, the dialogue and character interactions in the first hour or so are no where near the quality of Until Dawn. Even when I tried to shape the dialogue to make the characters seem less annoying, a cutscene would then play that either totally ignored the one of the dialogue choices I made or just went in a completely different direction. There is a moment once the dive has begun, where three shadowy figures approach the boat whilst divers are in the water in a moment that is the turning point for the group and as Fliss is trying to not give the game away that they have people in the water, Conrad starts throwing money into the sea trying antagonise them for some strange reason considering the danger it represented to himself and Fliss not to mention the people diving who would have no idea what was happening back on the boat and none of the dialogue choices I had made before this moment event suggested that this would even happen. It can be so distracting to have a situation suddenly happen which ignores anything you thought you had set up with your choices.

The story telling can also at times feel more focused on the cutscenes and trying to deliver a cinematic narrative which works best once the story jumps to the strange ghost ship you see in the trailers linking back to the prologue. I won’t go into too much detail here as this is really where Man of Medan does come to life but just as the voice acting and script bring this game down, it also suffers from very janky gameplay with slow movements which just makes moving around the environments heavy slow and though you can hold LB to “speed up” your walking, it never feels like it makes a difference. Navigating around the areas can feel laboured as you wait for the next event to trigger. QTE moments still have an impact and your first run through the game will feel more like a practice run for the next times you play through in order to not only be ready for when the vital QTE moments happen but also to see if you can change outcomes in order to see other possibilities. Like Until Dawn the Butterfly system returns now in premonitions to give players a hint at a possibly future should shouldn’t options be taken or not taken. 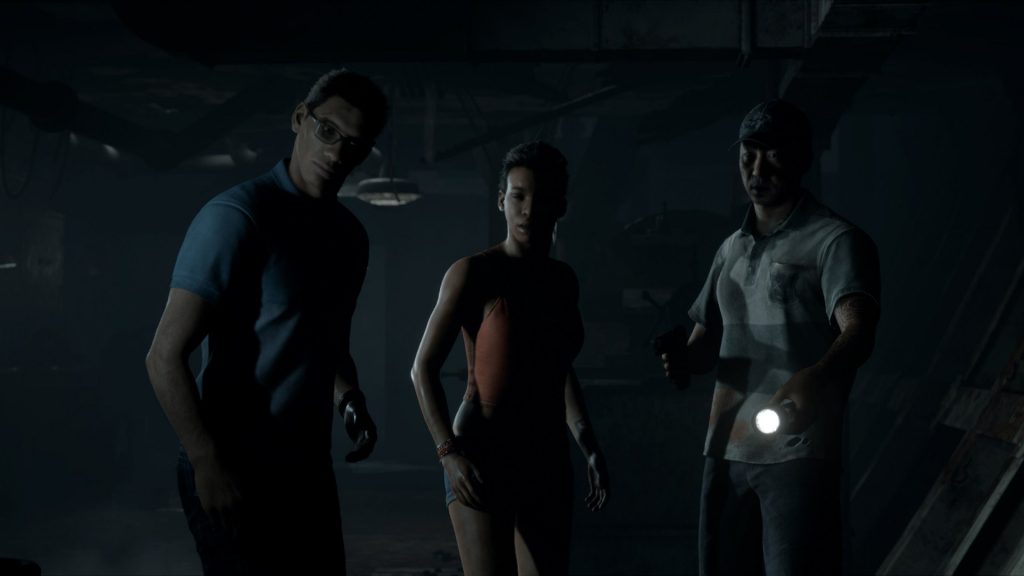 So far, the above does not paint a very inspiring picture for the game and honestly, I found it lacking in almost every regard where Until Dawn manage so effortlessly to accomplish but it does have one party trick that does make it stand out, online co-cop. The game is really designed to be played by two people and whilst it can be played solo that is only the second play option. When played in online co-op, both players play through the same story but there are moments where each player will control a different scene which the other will not see such as in the first half of the game when the three pirates appear with one player controller what happens above whilst the other controls what is happening with the divers as both scenes play at the same time.

When the main action of the story kicks in, the same system can really lift the story telling to a new level as two players and their actions, choices or mistakes can really change the same story for both players. Exploring the game with this system is something that comes close to saving the Man from Medan, which has an OK story despite its own self destructing nature to undo the mystery it wants players to solve themselves, this co-op system is really the highlight and something that will be a big factor in the next Dark Pictures titles.

But Man of Medan falls very flat in all its failings and faults which is a real disappointment for the team behind Until Dawn which came out four years ago. The new co-op system is a great addition and the formula of story telling combined with player choice that made the first game such a successful as simply buried under a less than riveting story and characters as forgettable as their voice actors.

This is the first in a series of standalone stories but more attention to detail and delivering the same experience that the Until Dawn had is essential for this new series of games to recover from this opening taste test. This is already at a fairly cheap price but honestly, this is one for the sales with so many titles releasing this time of year, Man of Medan is definitely one for the player to choose “pick up in the sales” instead of rushing out to buy it, I would recommend returning to Until Dawn if you are able to instead.