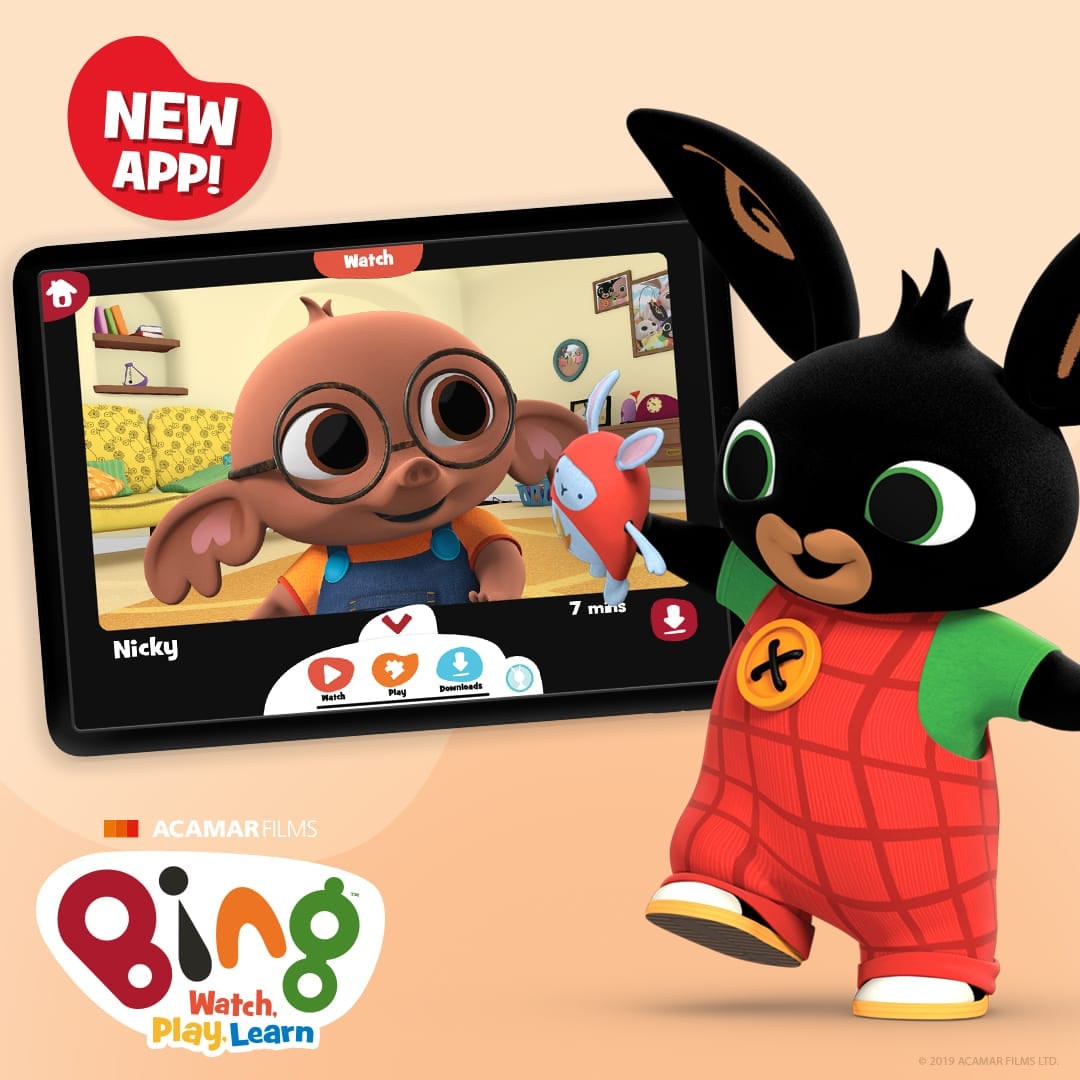 Bing, Flop, Sula, Amma and Pando will be joined by a range of loveable new characters – and for the first time, the show will cover Bing’s birthday, Bing’s Halloween celebration and Bing’s Christmas. In a first for Bing, and for Acamar Films, this brand new series, never-before-seen-on-TV, has its worldwide premiere on Acamar Films’ new freemium app, Bing: Watch, Play, Learn.

The newapp features a safe and ad-free world of Bingcontent including free episodes from the new series and specially developed educational games and activities designed to encourage positive emotional development.

Bing: Watch, Play, Learn launches on Apple App Store, Google Play and very soon Amazon Appstore. Bingsters and their parents can watch three brand new episodes for free. Those wishing to enjoy additional content on the app can take advantage of a half-price ‘early bird’ upgrade offer – just £7.49 for 12 months – ahead of a fuller version of the app (more episodes, more games, more learning!) being released at the end of October. This new app marks the beginning of an extensive commitment to world-class, audience-centred digital content from Acamar Films.

“This new digital home for all things Bing gives Acamar Films the opportunity to deliver brand new Bing episodes and learning games directly to Bingsters and to the grown-ups in their lives,” says Jodie Morris, Executive Director, Content at Acamar Films. “It’s incredibly exciting that, as a digitally-minded company, we can share new Bing content ahead of broadcast.”

This new app is initially UK-only, with plans to expand the offering globally in 2020. Acamar Films have followed strict online safety protocols in line with the company’s renowned commitment to its pre-school audience.

Bingsters and parents have already embraced Bing and the show’s core values of authenticity, friendship, reassurance and curiosity on several popular digital platforms. As the number one pre-school show on BBC iPlayer in 2018, a top pre-school show on Amazon Prime UK and official YouTube channels’ watch time minutes exceeding 3.3 billion, Bing has proven its value both on-screen and online over many years.

We have been testing the new Bing app and I can say that it’s a big hit with my 3 year old! We will be doing a full review of the app in October when the full content is released, but so far I would say if you have a child who lives Bing, this is the app to get!

Andrew Edneyhttps://moviesgamesandtech.com
I am the owner and editor of this site. I have been interested in gadgets and tech since I was a little kid. I have also written a number of books on various tech subjects. I also blog for The Huffington Post and for FHM. And I am honoured to be a Microsoft MVP since January 2008 - again this year as an Xbox MVP.
Previous articleA Knight’s Quest Coming This Fall
Next articleAssassin’s Creed Symphony – UK Concert Tour with Orchestra & Choir Announced