Nintendo Switch’s eShop is filled to the brim with digital titles and a lot more are added on a weekly basis. One such digital title is the rather puzzling iHUGU.

The goal in iHUGU is so simple that it will only take a couple of seconds to get the hang of playing it. Players pick a character and then proceed to either select one of two options to hug or not hug a random character. The idea is that it’s only possible to hug the same character once in a level. Hugging someone twice (or not hugging someone new) in the same level will result in losing any progress made.

Not that it matters that much since there isn’t much to discover in iHUGU. The characters that appear may seem different, but it’s only really their physical appearance that distinguishes them. At certain points some basic mini-games pop up, but these too won’t be entertaining players for long. It’s possible for a second player to join and take turns in hugging characters with another player, but it doesn’t make much of a difference.

Even the stages themselves are not particularly inspiring given that the player’s character automatically moves forward most of the time. The lack of any meaningful interactions with each of the stages makes it difficult to take the time to check details for each of them. 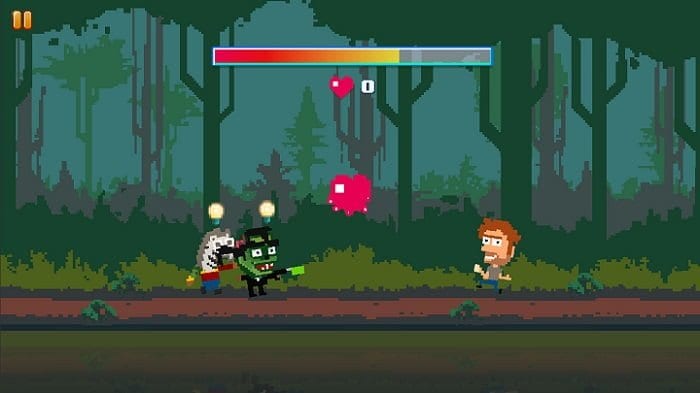 As players hug their way through each level, there are opportunities to collect clover shaped items. These can be exchanged for items and some of these can help players, such as a rubber ring item that can be used to skip a character, if players are not sure if he/she/it has already been hugged.

Sadly iHUGU has the potential to lengthen the amount of time that is spent playing it and yet chooses to be as simple as possible. It keeps track of the amount of hugs a player has achieved in a single play-through, but doesn’t do anything with it. Not even a local leader-board to motivate players to keep trying to improve their scores. Let alone online leader-boards to get players all over the world trying to beat the top scores.

What does work for the title is the retro visual look with lots of vibrant colours that pop out whilst playing it. The character designs can also be amusing and there are a few that even resemble famous people.

It feels like iHUGU is a better fit as a mobile phone application which makes sense since it’s been released on the Google Play store. It is difficult to recommend it when it’s on hardware that already contains far better titles. It’s certainly a perfect example of the consequences of not having stricter control over what appears to be an already saturated Nintendo Switch eShop. A game about hugging might seem like a quirky idea, but what iHUGU has to offer isn’t substantial enough to warrant playing for only a brief amount of time at most.