There was a time when the platform genre was in high demand with the likes of Super Mario 64 and the excellent Banjo-Kazooie titles creating some fond memories for a lot of players. Whilst Banjo-Kazooie developer Rare seems to have moved on, a few of its staff members formed new studio Playtonic Games to work on the highly anticipated Yooka-Laylee.

Yooka-Laylee started out as one of many Kickstarters and it was fortunate enough to gain the attention of Team 17, who went on to publish it on behalf of Playtonic Games. The idea behind Yooka-Laylee seemed to be to create a spiritual successor as close to the popular Banjo-Kazooie titles as possible without presumably getting tangled up in any legal issues. Yet, despite the obvious similarities, like the two animals working together, it manages to stand out on its own. The premise is that Yooka and Laylee are happily relaxing in their cosy little shipwreck themed home, when a special book in their possession suddenly gets swiped (along with every other book) by the evil Capital B and his scientist minion, Dr Quack. Unfortunately for Capital B, the “Pagies” pages of this book get swept all over the land and it’s up to our heroic duo to get them before he does.

It’s a testament to the quality of a title when it’s still compelling to play it when there are barely any story developments whilst playing it. Instead it relies on good old fashioned curiosity to engage players. Pagies and other collectibles can be found all over the hub, but most of them are obtained by exploring the worlds created by the Grand Tomes. These oversized books are unlocked when the player has enough Pagies to unlock each of them. Each of these worlds has a distinct and vibrant appearance and there is plenty to do when it comes to finding collectibles like the Pagies. Most of these collectibles require tackling puzzles that will usually leave players feeling accomplished upon solving them. Not only that but each world can be expanded by using Pagies to unveil even more collectibles and interesting challenges. 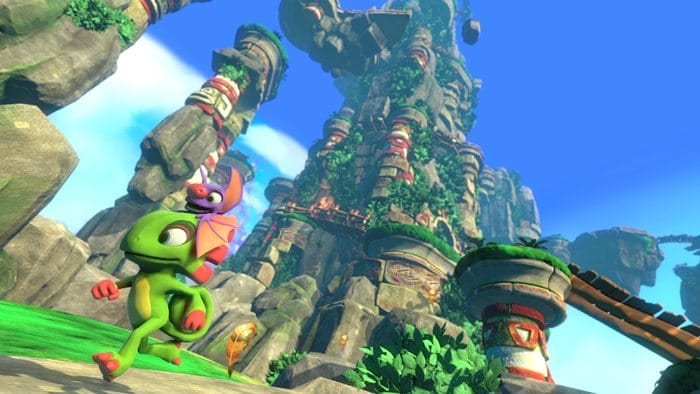 In order to obtain most of these collectibles, it is necessary to learn new abilities and that is where Trowzer, a trendy snake with a knack for business, comes in handy. Trowzer provides the characters with essential abilities when they find him at different locations of the hub. He also sells other abilities, in exchange for feathers players collect, within each Gran Tome world that makes it possible to obtain more collectibles. Some of these moves require the use of a power bar which is refilled by either grabbing a butterfly (eating it restores health) or waiting a couple of seconds for it to do it automatically. The beauty in this game mechanic is that it means players don’t have to play the game in a certain order. Instead, it’s even feasible to not take on a boss for a world right away and moving on to another world. Having a bigger number of Pagies than what is required to unlock every area also means players don’t have to struggle to complete some of the tougher puzzles and challenges. Giving players the freedom to explore (provided they have enough Pagies) demonstrates how confident the development team is with Yooka-Laylee’s level design. The very hub is designed to ensure that curiosity is rewarded with shortcuts just waiting to be found, usually by making use of new abilities, that make travelling between Grand Tome worlds a less time consuming task.

Even the fact that some of the abilities don’t work exactly as expected, such as a transformation into a snowplough, that feels somewhat inefficient when turning, doesn’t manage to ruin what is still a delightful journey. Another section which might frustrate players a bit is the use of a rolling ability when facing the boss in the first world, since it’s difficult to turn and jump to avoid obstacles in a ramp. It more than makes up for it with plenty of other clever tricks that not only make each world seem unique, but it manages to do so without making it feel like each of these areas doesn’t belong in the same game. Even some of the challenges that make use of the same gimmick, such as a mine cart ride to collect gems, seem different due to the unique style of each world and the fact that each challenge gets harder. Yooka-Laylee is bursting with clever ideas that never fail to impress players.

The charismatic cast of characters is easily one of the main reasons why it’s such a joy to play the title. Each one comes with its own distinct personality traits like the clogged up cloud that needs some help with getting in touch with its emotions and the hopeless skeleton explorer who is constantly in need of rescue. Even the bosses have their own issues, like the first angry boss who suspects our heroic duo is just another pair of salesmen, who apparently have been harassing every character in its world. It’s fascinating how it efficiently integrates British humour in conversations with the unique set of characters. There is something typically British about a character whinging about missing its favourite soap operas due to worrying about the player characters potentially stealing its favourite tea towel. Or the way that characters like to throw in sarcastic one liners, such as one about looking up the items that can be absorbed when using a move on the Internet. 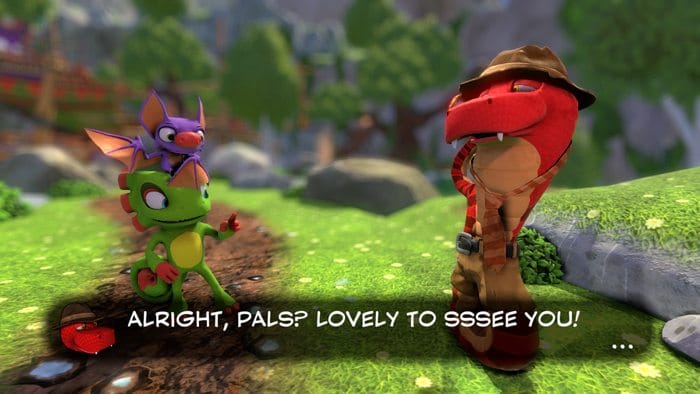 Yooka-Laylee isn’t satisfied with just providing players with meaningful challenges and puzzles. At different stages players are ambushed with a quiz created by Dr Duck and the only way to continue is to correctly answer several questions within a time limit, about areas visited and basic player stats, to get to the other end of a room. Fail to answer three questions and it’s back to the start. It’s hilarious to notice that the game can’t be paused during these quizzes, given the fact that players these days would most likely cheat by looking up the answers on the Internet. At one point the title even makes use of an isometric viewpoint, in the cleverly named Isometric Ice Palace, to add a whole new layer of puzzle solving, that at one point involves finding a path in a labyrinth of rooms with multiple paths.

The title also provides players with a set of arcade games that can be played in the story mode for a collectible or outside of it alone or with other players. Each one is surprisingly addictive and is enjoyable to play more than a couple of times, despite the fact that it doesn’t include the ability to play with others online. One of the better arcade games, Hurdle Hijinx, sees the heroic duo running upwards whilst avoiding obstacles and collecting items to increase the score. 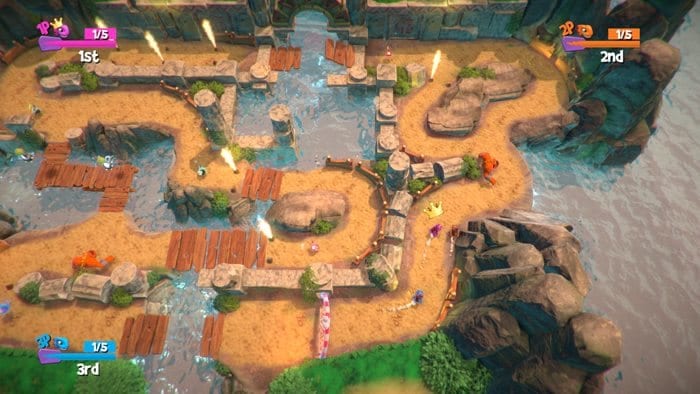 It’s difficult to not feel overwhelmed with nostalgia whilst playing Yooka-Laylee. The sort of title that will bring back fond memories for those old enough to have lived in the golden age of the platform genre, whilst still managing to gain the attention of a younger generation. The characters even sound the same way as those found in the Banjo-Kazooie titles. Yet, it still feels very much like it belongs in the present.

It may resemble the platform titles of the nineties, but it does so in a respectful manner and it never attempts to lazily use it as an easy way to make players fall for its charm. If anything, Yooka-Laylee’s hard work pays off and successfully creates a world of wonders full of surprises just begging to be found by those who embark on this adventure.

Diogo Miguel
Previous articleCities: Skylines to Launch for Xbox One on 21st April
Next articlePersona 5 is out now for PS4/PS3