CES 2016 Huawei teams up with Swarovski for smart watches 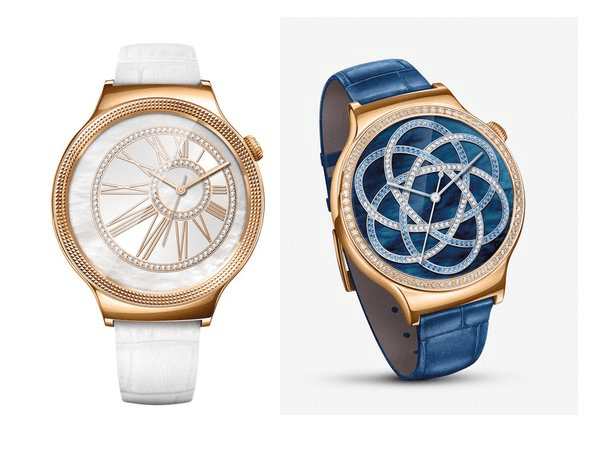 Both watches come with genuine Italian leather watch straps in a choice of pearl white and sapphire blue colour options. They also come pre-loaded with over 40 watch faces like the original model but there are a further 10 feminine-designed faces available on the Jewel and Elegant. Both the new models also have a heart rate monitor and motion sensors for fitness tracking like the original device.

Scratch-proof sapphire crystal protects the 44mm faces and the Jewel and Elegant’s bodies are made from cold-forged stainless steel and plated in rose gold, as we mentioned previously. As you might have guessed, Android Wear is the operating system meaning the Huawei Watch Jewel and Elegant are compatible with both Android smartphones and iPhones, although there is less functionality when paired with an Apple device.

The Elegant model is a little more understated featuring a knurled pattern effect around the face instead, although crystals, albeit fewer than the Jewel, are still present on the face.

Chris Hare
A True Tech Geek at Heart, I Started my life of being a Tech Geek at the age of 5 with the BBC Micro. Went on through most of Nintendo stuff and now a Xbox and PlayStation fan. I also leaked the information about the leaked Hotmail passwords story from October 2009 that went World Wide. I Started writing tech articles at the beginning of 2011, most of my articles are about Android phones and Xbox One and PlayStation 4 and other gaming news. When Chris has free time its with the family.
Previous articleCES 2016 Huawei announces the MediaPad M2 10 tablet
Next articleHTC unveils Vive Pre, its second-generation developer edition VR system