Ubisoft invited us to an event in London to play some Assassin’s Creed Syndicate and here is some gameplay playing as Jacob Fry. 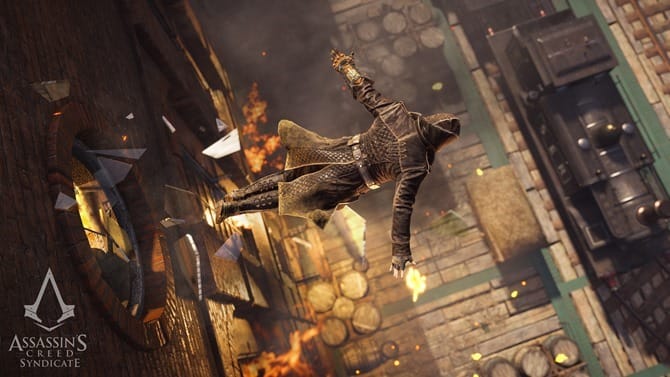 London, 1868. The Industrial Revolution unleashes an incredible age of invention, transforming the lives of millions with technologies once thought impossible. Opportunities created during this period have people rushing to London to engage in this new world, a world no longer controlled by kings, emperors, politicians, or religion, but by a new common denominator: money.

Not everyone is able to enjoy the benefits of this boom, however. Despite fuelling the engine of the British Empire, workers’ lives are little more than legalized slavery while the top few percent profit from their labour. Living poor and dying young, the lower class unite in protest as a new kind of family, gangs, who turn to a life in the underworld in their struggle to survive. A struggle, until watchful Assassins come to their side and re-ignite an age-old conflict involving London’s leaders that will echo throughout modern history, from the underground up.

Introducing Jacob Frye, who with the help of his twin sister Evie, will change the fate of millions in Assassin’s Creed Syndicate. Rise to rally and lead the underworld to break the corrupt stranglehold on London in a visceral adventure filled with action, intrigue, and brutal combat.

Here are a number gameplay videos from Sequence 3 playing as Jacob, there might be some spoilers so watch at your own risk. All gameplay footage was captured from the PlayStation 4 version of the game in 1080p 60fps.

Freedom of the Press

Assassin’s Creed Syndicate will be available on Xbox One and PlayStation 4 on October 23rd with the PC version following shortly after.

Andrew Edneyhttps://moviesgamesandtech.com
I am the owner and editor of this site. I have been interested in gadgets and tech since I was a little kid. I have also written a number of books on various tech subjects. I also blog for The Huffington Post and for FHM. And I am honoured to be a Microsoft MVP since January 2008 - again this year as an Xbox MVP.
Previous articleAssassin’s Creed Syndicate Exclusive Interview with Scott Phillips
Next articleAssassin’s Creed Syndicate Exclusive Gameplay as Evie Fry in 1080p 60fps