The initial premise for Beyond Earth is simple albeit serious. Humanity has screwed itself. There’s very little explanation but I imagine we all nuked each other or melted the ice caps or something. If my previous Civ games are anything to go by Giant Death Robots and Xcom soldiers probably did it. But never fear! There is an equally complicated solution. Journey to a different planet and recreate civilization from scratch.

At its core Beyond Earth is Civilization V with new features added or altered. Although that may seem like a bad thing to some, Civ V makes a very good platform on which to base another title. After playing Civ V extensively it’s easy to think you know it all due to Beyond Earth’s similarities. It quickly becomes apparent this isn’t the case.

Creating a game is much more like a wizard than ever before, and despite the fact you can still opt to use the advanced options menu for once I actually enjoyed the user friendly version. Although using my previous knowledge of Civ made it difficult to choose the right factions and their abilities. I had a go but realistically it’s only on your second game that you can make an educated decision.

Rather than picking a faction and getting a special ability and a special unit that becomes obsolete by mid game you now have 4 decisions; Sponsor, Colonists, Spacecraft and Cargo. There are some tricky decisions to be made and the amount of potential combinations is massive. The result is far more unique factions that behave much more like different nations than just nations with different names. One such ability allows you to see strategic resources on the map before you unlock the technology for it. Opting for this one allows you to secure huge amounts of resources early and mid game and bag plenty of favours and bargaining power for later on.

Favours are new to Beyond Earth and essential act as a tradable commodity. They can be quite valuable and can create some interesting diplomatic situations. At one point I had around 7 or 8 favours with a nation who I started to have ‘disagreements’ with. I found myself trying to be cautious and at least maintain neutrality until I’d had time to cash in my favours.

The main reason for disagreements between nations are related to your chosen victory condition. The cultural and diplomatic victories are not present but conquest still makes an appearance. A new condition that can be achieved by anyone is the contact victory. After acquiring certain technologies your nation can track a signal and attempt to make contact with an alien race. The other three victory conditions can be seen as factions as each requires specialisation to a particular kind of tech.

The Promised land victory requires you to build a transport gate and bring the survivors from earth to their new home relying mainly on war machines and earth tech. Emancipation pursues high technology and eventual sees your civilization rely on cybernetics and robotic implants. Finally transcendence sees you researching the alien wildlife on the planet and integrating it with your own technology. Each of the three requires a focus in the tech tree that by late game further emphasises the differences between nations to the point were you feel each has fundamental disagreements.

Pursuing the transcendence victory allowed me powerful alien/human hybrid units and eventually a giant bug like monster called the Xeno Titan. Fighting different units rather than just the same unit with a different colour is really refreshing and creates a very welcome change from Civ V. 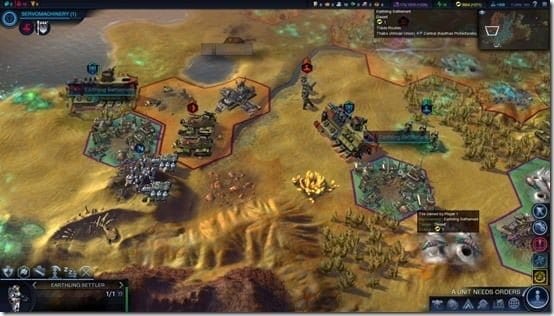 Another feature that has been totally redesigned is the tech tree. No longer will you have to research everything. No longer is it just a case of choosing which order you research in – now there are actual decisions to make. Rather than a linear tree research is now carried out using the tech web. As the name suggests it sprawls in every direction. It’s very difficult to see what upgrades are important initially and my first game was basically an extended trial and error session.

Your chosen victory condition(s) make a huge bearing on which directions you go in but it’s a little difficult to identify which upgrades you need. On my first game I acquired all the transcendence tech I needed to construct the victory condition building only to find I couldn’t build it. In fact I’d missed a couple of researches out and it turned out I hadn’t paid enough attention to the quest menu which directed me on what to do next. A simple mistake but the researches can be hugely overwhelming at first with no dictated direction. Luckily by my second game I had enough knowledge to use the web properly and research efficiently.

Virtues have essentially replaced the policy system from Civ V but have a few added twists. You are now presented with 4 distinct virtue paths and rewards are granted for having a certain amount of virtues by type and by level. For example you could have a certain amount of virtues at level 3 across any type and gain a free virtue. Or you could have a reward from having 4 virtues in a single type. Or both. There’s some serious though to be put into virtues and the rewards are good enough that you may consider a slightly inferior virtue if it grants access to the reward.

There’s a much lower focus on buildings for your cities than before which becomes an absolute godsend late game. You’re now actually able to catch settlements up with your capital so they can produce things within a reasonable timeframe. There isn’t a need to construct countless buildings just because they’re there. Instead there are far less buildings but each one actually does something significant. As an added bonus building something new will bring up a quest choice which allows you to decide an additional benefit that all buildings of that type will have. For instance you might decide if that building gains +1 production or +1 food. Some of these benefits can be game changers and is another nice way to ensure nations, and repeat games, feel unique. 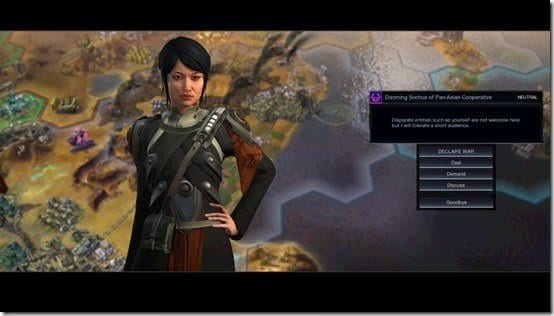 It’s impossible not to see Civ V shining through but Beyond Earth is absolutely brimming with style. Units, buildings and tile improvements all look beautifully colourful and sci-fi-ey. With a totally revamped technology tree, virtue system and genuinely unique factions Beyond Earth feels like much more than DLC.

phillvine
Phill has been the director of a small IT repair business since 2011 which he runs alongside studying for his degree in Information and Communication Technologies at the Open University. Video games are his real passion and they take up more of his time than he'd like to admit.
Previous articleReview: Lords of the Fallen
Next articleNew gameplay trailer for Toybox Turbos