Welcome to the Sony Xperia Z3

Sony has launched the Sony Xperia Z3 at IFA 2014 in Berlin, with only a small time since the last Xperia Z series update.

Sony’s changed the design, only slightly from the Z2 launched back in February 2014. The new handset measures 146 x 72 x 7.3mm thick and weighs 152g, squeezing tempered glass panels into the aluminium frame and giving you IP65/68 water resistance.

With a Qualcomm Snapdragon 801 quad-core chipset at the heart clocked at 2.5GHz along with 3GB of RAM. There will be 16 and 32GB versions of the Z3, along with MicroSD support up to 128GB. 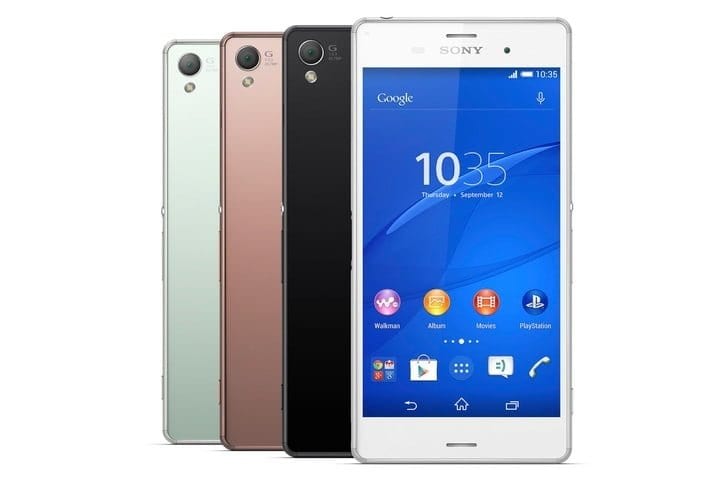 As with the Z2, the Z3 offers a 5.2-inch display with a resolution of 1920 x 1080 pixels, 423ppi. That Triluminos display comes enhanced with Sony’s Live Colour LED and X-Reality technologies, looking to give you plenty of punch.

The Xperia Z3 will have a 20.7-megapixel 1/2.3 Exmor RS sensor with Sony G Lens and Bionz processor around the back. Also included is the SteadyShot stabilisation and Sony has also added ISO 12800 to the camera options.

Its supports high resolution audio and has integrated noise cancellation when used with the NC31EM headphones.

Key features of the Z3:

The Sony Xperia Z3 launches on Android 4.4 KitKat, with Sony’s customisation over the top. With the Sony Xperia Z3 you can get PlayStation 4 Remote Play (like the Vita) and Sony has released the GCM10 Game Control Mount so attach your dual shock controller to your phone.

The Sony Xperia Z3 will be available in black, white, copper or silver green, now word on pricing and date just yet.

Chris Hare
A True Tech Geek at Heart, I Started my life of being a Tech Geek at the age of 5 with the BBC Micro. Went on through most of Nintendo stuff and now a Xbox and PlayStation fan. I also leaked the information about the leaked Hotmail passwords story from October 2009 that went World Wide. I Started writing tech articles at the beginning of 2011, most of my articles are about Android phones and Xbox One and PlayStation 4 and other gaming news. When Chris has free time its with the family.
Previous articleSamsung Announces VR Gear
Next articleSony Xperia Z3 Compact announced

Premium Sci-Fi magazine and podcast platform The Companion will...
News

Wales Interactive, acclaimed for its FMV games and narrative-driven...