Another huge year for football, another year for EA to release its World Cup companion game. Will those who’ve bought FIFA 14, and will most likely buy FIFA 15, get anything out of this edition, or will three FIFA titles in 12 months be a little too much, even for the truly hardcore? 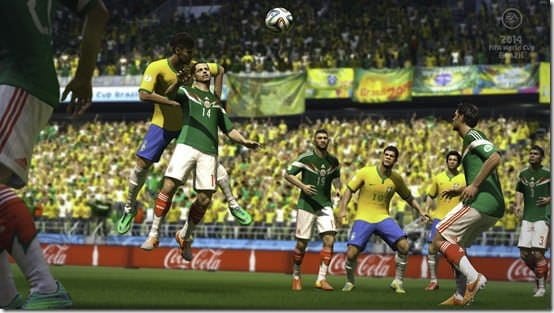 Whilst initial impressions scream of a re-skinned FIFA 14, mainly due to the still overly convoluted and online focused main menu being daubed in gaudy greens and yellows, it quickly becomes apparent that this is anything but. This is a game that has been specifically engineered and marketed, to appeal to fans of the World Cup, and to those who fancy reliving all the joys and despairs, long after the pubs are closed and the tears of the streets are dry.

In lieu of the countless leagues and teams that comprise a normal FIFA, over 200 national squads take their place. To account for this, certain modes have been altered slightly, along with adding a few new ones. You can still create a player and lead him, eventually, to captain status in your country of choice, yet it works a little differently from the previous titles. Instead of completing challenges and the like to improve stats, your progression will develop depending upon how ‘in form’ you are. Whilst this may sound like a logical solution, it can also frustrate if the AI lets you down and refuses to make any competent decisions, such as passing the ball.

Adding to the roster of available game modes is an interesting, scenario based mode called the Story of Qualifying ,which asks the ‘what if’ questions and tasks you with performing them. You’ll often be losing by a goal with around ten minutes on the clock to turn it around; usually starting with a set piece in your favour too. It can indeed be tense and fun to pull off the incredulous, and considering there are not only several difficulties and side objectives to go for, but that once the tournament actually starts, this mode will extend there too, stretching the possibilities and giving disparate fans something to do whilst Spain walks off with it.

In terms of gameplay, not too much has been altered from FIFA 14, crossing accuracy has been tweaked to help stem the flow of headed goals, yet pace is still too an important stat to focus on. Fortunately, the customisable slider bars make their return once more to help make the single player portion of the game seem a little more realistic, and is often worth making a few minor adjustments here and there. Corners have been spruced up a little too with the addition of being able to tell your teammates to crowd the keeper, make runs to the near/far post and others, making it a little easier to fulfil what you actually want to accomplish. The main downside to the gameplay is that, due to it not being on the PS4 and Xbox One, you’re missing out on the Ignite engine of FIFA 14; unfortunately, the difference is beyond noticeable. 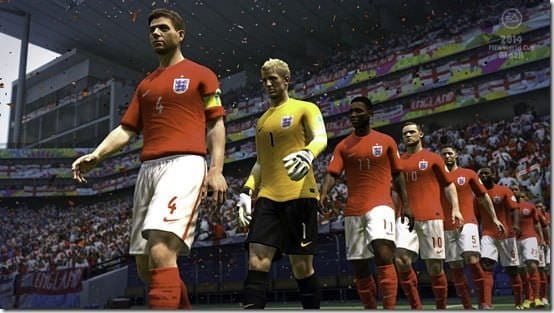 Midfield scrambles seem more infuriating this time around too, as when a teammate loses possession, and you’re playing as one of the lesser ranked nations, unimaginable irritation ensues. Teammates will stand idly by, watching as the ball rolls mere feet from them, whilst an opposition member will gladly race 15 yards to pounce upon a loose ball. Just because they might not be as technically gifted, doesn’t mean they’re incapable of sticking a foot out. It not only diminishes the experience, but often devolves into a farcical state of patiently waiting until the opposition regains possession whilst inanely mashing the pad.

Without FIFA’s flagship Ultimate Team mode, is there anything to keep you playing in the long term? Probably not is the short answer! Whilst there is an online league system where wins will propel you further through the ranks in an attempt to clutch online gold, I can’t see the mode being too overpopulated too long after the World Cup season has finished. Fortunately, due to the intended audience being of a more casual nature, there’s plenty of offline content to suit those rainy Sunday afternoons.

Along with a competent, if not entirely competitive, two button control scheme for those new to the genre, there is also a beginner difficulty setting, helping to ease the uninitiated into the flow of play. More options on the training field wouldn’t go amiss however; it would be nice if you could set up customisable individual scenarios, such as dribbling around actual players that would move to intercept you, instead of the intimidating stationary cones and sticks. Not only would this improve some player’s concepts of the more advanced controls, but also being able to upload them for others to compete with, could be worked in too. 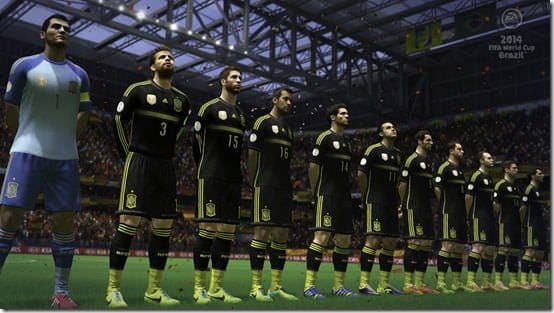 There have been some nice added touches that can make a surprisingly impactful difference on the player’s experience. Little dashes of immersion such as the camera cutting to a local drinking establishment to witness the fans admiration/desolation when someone scores, despite the perhaps slightly blinkered view of a pub packed with English drinkers… The music, whilst certainly apt and justified, still could benefit from custom soundtracks and a playlist, yet it’s not all about the music though in FIFA World Cup. Radio podcasts have also been added during the World Cup modes, hosts Andy Goldstein and Ian Darke make excellent commentaries and genuinely interesting discussions; also available are ‘The Men in Blazers’ take on proceedings; whilst they can eventually repeat themselves, it’s a feature that I would love to see return or make an appearance in the next full title.

Due to being spoilt with last year’s excellent looking FIFA 14 on the PS4 and Xbox One, it’s inevitable that the graphics on this, the PS3 and Xbox 360 generation hardware, were going to take a hit. For the most part, it looks good, however, there are noticeable frame rate dips in seemingly random places, plus the jagged lines on the centre circle are a little disappointing, along with a general drop in definition across the board. One other minor annoyance, that wouldn’t normally come up if it were not for the short scenario matches, is the game only auto-saving once you reach the end of match screen, not slightly before, making you unable to move the cursor to the retry option for a seemingly interminable amount of time, especially noticeable after your fifth retry!

Whilst it may not be the update most were hoping for, and that it could well have been released as DLC instead, 2014 FIFA World Cup Brazil is still a solid entry. Meant more as an accompaniment to the event for casual fans than a full blown release, I can’t help but feel it would have significantly ignited my interest more, had it been on what should be now called the current gen, the PS4 and Xbox One.

Sam Thompson
Previous articleNew details for Call of Duty: Advanced Warfare released
Next articleA look at some Game of Thrones merchandise from the HBO Store

Texelworks hypes up their upcoming May 2021 First-Person Shooter (FPS) experience. 41 Hours will take you through an immersive journey including time travel, portals,...

Texelworks hypes up their upcoming May 2021 First-Person Shooter...
Gaming

Chiki-Chiki Boxy Racers is a cute party racing game you can play with up to 8 players!
Reviews

Get in There is something about taking a long drive,...