Buffalo has announced three new DD-WRT routers for the open source fans to use.  Read on for details. 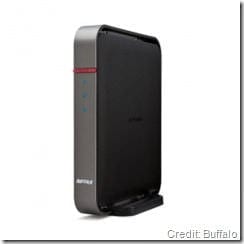 Buffalo has announced three new DD-WRT routers for the open source fans to use.  They’ve announced an AC1750 model, an N600 and an N300 model, all with DD-WRT support.  Here is the press release:

This new trio of routers features open source DD-WRT firmware out of the box, offering the best of both worlds – convenience and openness. With a breadth of powerful features not normally found in similar routers, Buffalo’s latest open source DD-WRT offering supports a great number of functionalities with simple setup and configuration. Additionally, DD-WRT provides added stability for reliable operation and improved performance, ideal for the demands of a professional networking environment.

“We are excited to have the opportunity to work closely with Buffalo, bringing DD-WRT to a professional audience on reliable and powerful hardware platforms. Together we form a powerful partnership with distinct new offerings for resellers and professional-grade customers,” said Peter Steinhaeuser, CEO at NewMedia-NET.

“Consumers and business professionals are demanding increased access and control of their wireless network configurations,” said Matt Dargis, COO at Buffalo Americas (USA), Inc. “We launched new open source DD-WRT models of the AirStation router to address this rising demand, giving users the ability to unlock advanced capabilities of their wireless routers at a cost effective price. These features, such as PPTP, OpenVPN and VLAN, allow network administrators and programmers to enable advanced features typically unavailable in consumer-grade wireless routers. ”

DD-WRT is an open source Linux-based firmware for wireless routers and access points. Offered as an alternative to OEM firmware, DD-WRT provides users with advanced features and capabilities, including:

I’m a little late reporting on this, as all three routers are currently available.  If you are looking for a router that support DD-WRT, these three may be of interest!

Jim McCarthy
My tech interests include WHS, media streaming, and gaming, among others!
Previous articleSynology Adds 5TB Drive to Compatibility List
Next articleReview: Kinect Sports Rivals on Xbox One