Review: Pac-Man and the Ghostly Adventure

As Pac-Man is a somewhat famous name if you remember the original 1980’s game. Before you even begin the majority of games in the series you have a relatively good idea of what you’ll be doing. Some entries have changed the formula slightly, but not significantly, but Pac-Man and the Ghostly Adventures takes everything you thought you knew about Pac-Man and throws it out of the window, in the nicest sense. 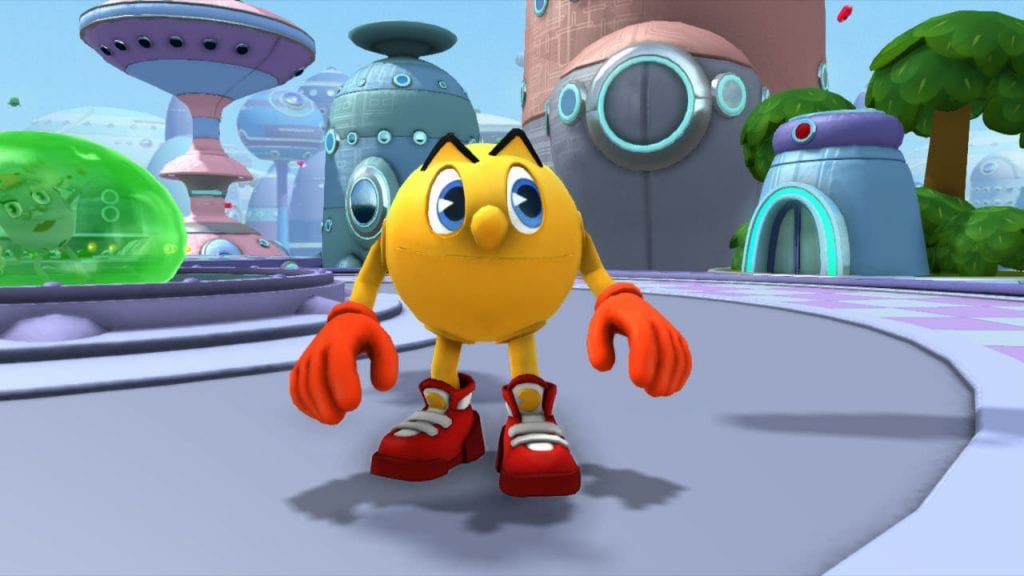 Now in this imagination of Pac-Man, gone is the traditional maze-based gameplay, with have instead been replaced by a 3D platformer, gone is the silent and simple protagonist replaced a 3D character with a can-do attitude and gone, at least in part, is the fierce rivalry between Pac-Man and those pesky famous ghosts.

After booting up Pac-Man and the Ghostly Adventures you are introduced to the world and characters by way of a simple cutscene announcing that there are three globes that need power in order to gain access to some temples, and that Betrayus has launched an attack on Pacopolis. 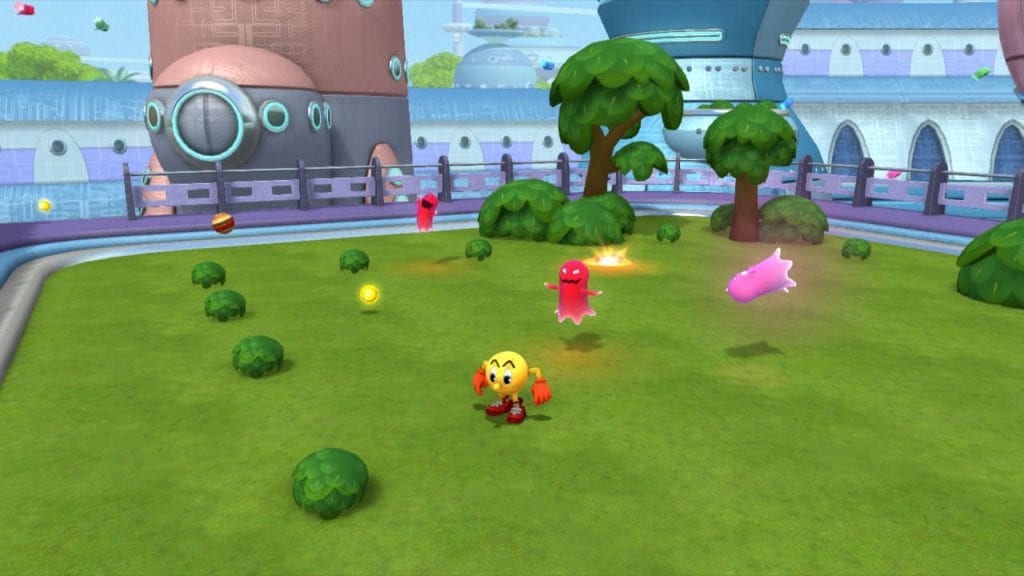 This is effectively as detailed as the story gets, the meager plot funneling you to various locations in order to grab different artefacts and defeat some of Betrayus’ minions. With the game is aimed at a younger audience the uncomplicated plot is understandable as a design choice, but even so the story is poor and the questionable voice acting certainly doesn’t help.

After the brief cut-scene you are dumped into Pacopolis with the task of reaching the piece of fruit at the end of each level. Each area is covered with the familiar glowing yellow pellets that are required to enter some levels. There is also Slimetanium to collect (which can be used to add extra hearts for Pac-Man), as well as eyes of the ghosts you eat, which can be redeemed for extra lives. Don’t worry, I don’t really see how eyes mean extra lives, either.

The platforming areas are solid apart from the first handful, although this is down to the power berries adding unique gameplay mechanics. If Pac chomps on one of the power berries he will change form, some berries change him into a giant ball, others a fire or ice Pac and one even turns him into a chameleon. Often areas will be impassable unless you are in a certain form, but fortunately the required berry is never far away. Some enemies, such as the ice ghosts, can only be defeated when Pac is in a certain form, which can be abit annoying at times. 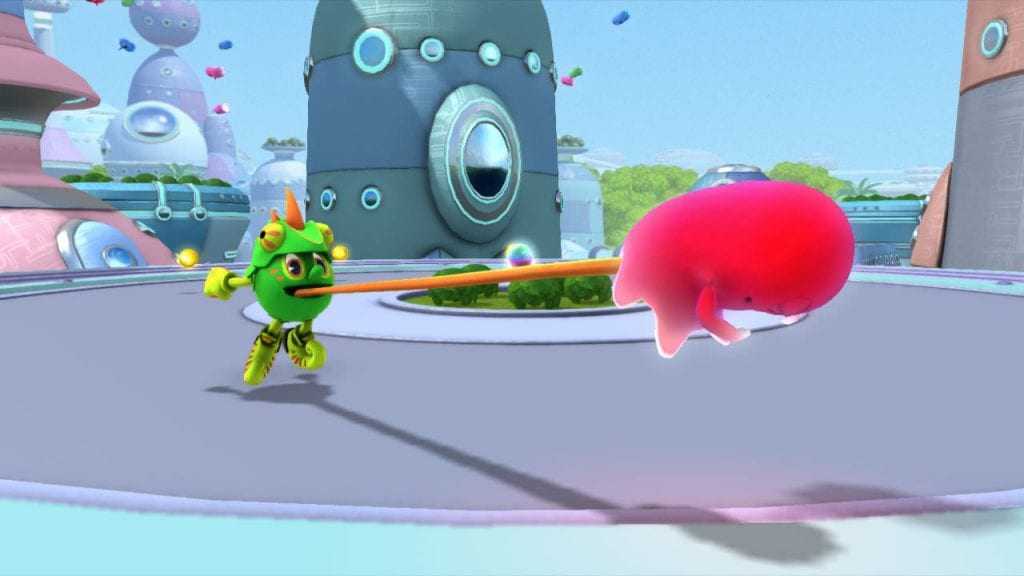 The power berries change the game entirely, and some of them such as the chameleon berry or the giant ball berry – are brilliant changes of pace, albeit slightly underused. Throughout the six worlds, two of which revisit previous worlds, you will only become a giant ball or a chameleon in a handful of levels, whilst the slightly less awesome transformations such as Fire Pac or Rubber Pac are much more common. If the adventurous power berries were more frequently used, Pac-Man and the Ghostly Adventures would be a lot more fun.

Although the power berries increase the enjoyment of the game, the standard platforming sections with normal Pac are still tight and pretty decent. Levels are full of challenging platforming sections but will not be impassable for experienced gamers, but the younger market at which the game is aimed may struggle at times.

Unfortunately, the camera isn’t quite as tight as the platforming. Occasionally the camera will move to an angle that doesn’t show what needs to be seen, or is angled in a way that messes with the depth perception, leading to you try to make an impossible jump. This doesn’t happen all that often, but it’s enough to be noticeable and annoying. You can change the camera angle with the right sick, but often the damage has been done before you have a chance.

The ghosts that fill each of the levels could also use some work. The incredibly basic AI makes them predictable and none of them are particularly difficult to counter or kill. Strangely it was Inky, Pinky, Blinky and Clyde who alerted Pac to the attack on Pacopolis, yet it is their ghost brethren that are attacking the city and being killed by Pac.

A throwaway multiplayer mode sees up to four players being ghosts and having to chase Pac-Man around a maze in the classic style, albeit in 3D. This mode is fun at first but quickly loses all sense of fun as the repetition creeps in. 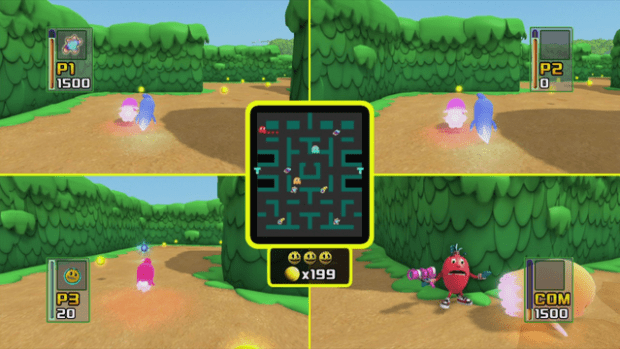 Chris Hare
A True Tech Geek at Heart, I Started my life of being a Tech Geek at the age of 5 with the BBC Micro. Went on through most of Nintendo stuff and now a Xbox and PlayStation fan. I also leaked the information about the leaked Hotmail passwords story from October 2009 that went World Wide. I Started writing tech articles at the beginning of 2011, most of my articles are about Android phones and Xbox One and PlayStation 4 and other gaming news. When Chris has free time its with the family.
Previous articleThe complete list of BAFTA Games Award Winners 2014
Next articleRazer Blade Now World’s Thinnest Gaming Laptop

New research from Vodafone has proved just how much we value time spent with colleagues with over forty percent (40%) of workers claiming they miss spending time with their workmates and office jokes and light-hearted chat (41%) the most, as working from home becomes the new norm.
Read more
Family

As millions of families worldwide adjust to staying home in light of the COVID-19 pandemic, global play and entertainment company Hasbro, Inc. announced the launch of Bring Home the Fun, a global initiative created to further the Company’s purpose to make the world a better place for children and their families.
Read more