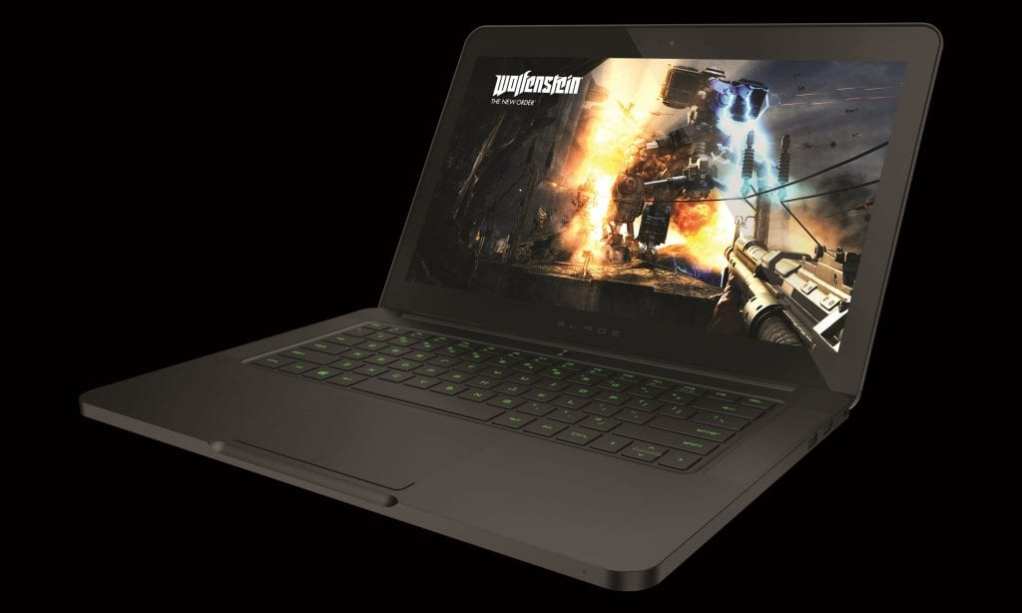 The result is a 250 percent increase in contrast ratio over its predecessor, with high brightness LED backlighting optimized for outdoor use, wide viewing angles, and dramatically improved video propagation and response. The Razer Blade´s display minimizes color shift while maximizing uniformity to make gaming more beautiful than ever before possible.

Blending retina-tearing clarity with ultimate functionality, the Razer Blade is also equipped with a 10-point capacitive multi-touch screen that works seamlessly with the new touch interface in Windows 8.

“The Razer Blade sets the benchmark by which all laptops should be measured,” says Min-Liang Tan, Razer co-founder, CEO and creative director. “The Razer Blade, the world´s thinnest and most powerful gaming laptop, now comes with the best 14-inch notebook display on the planet.”

Measuring just 0.7-inches thin, the Razer Blade also packs more power-per-cubic-inch than any other laptop in the world. The Razer Blade boasts frame rates that are up to 70 percent better than the previous iteration with the latest NVIDIA GeForce GTX 870M GPU. The Razer Blade is powered by a 4th gen Intel Core i7 processor and uses solid-state storage technology for boot speeds up to four-times faster than a traditional notebook hard drive. Constructed in a rugged all-aluminum chassis, the Razer Blade features a custom-designed track pad and backlit gaming – grade keyboard that has full anti-ghosting capabilities and programmable keys powered by the revolutionary Synapse 2.0 software.

“The Razer Blade laptop screams premium design and top-notch performance, and we are as happy as can be outfitting such a beautiful and powerful machine with our latest graphics processor,” says Brian Choi, NVIDIA Sr. product manager. “With nearly twice the graphics horsepower compared to last year´s model, the Razer Blade will be one of the most visually stunning, yet portable, gaming laptops the world has ever seen.”

The ultra-portable laptop features 8 GB of fast 1600 MHz DDR3L memory and comes standard with 128 GB of total solid-state storage with options for a 256 GB or 512 GB SSD. The Razer Blade also comes with Dolby Home Theatre v4, featuring immersive audio-quality output that is custom-tuned to deliver a cinematic sound experience.

The Razer Blade delivers up to six hours of battery life and includes the latest high-performance 802.11ac wireless connectivity.

The 14-inch Razer Blade embodies Razer´s continuing drive to design the world´s best gaming laptops for those that need insanely powerful performance, the thinnest form factor and the highest resolution screen to game anywhere, anytime. Razer sets out to do the impossible without compromising performance and, with the Razer Blade 14-inch laptop, users are able to do more than ever before on an ultra-portable system.

The Razer Blade is now available for pre-order. For more information, go to www.razerzone.com/blade.

Chris Hare
A True Tech Geek at Heart, I Started my life of being a Tech Geek at the age of 5 with the BBC Micro. Went on through most of Nintendo stuff and now a Xbox and PlayStation fan. I also leaked the information about the leaked Hotmail passwords story from October 2009 that went World Wide. I Started writing tech articles at the beginning of 2011, most of my articles are about Android phones and Xbox One and PlayStation 4 and other gaming news. When Chris has free time its with the family.
Previous articleReview: Pac-Man and the Ghostly Adventure
Next articleCan you cut ‘Surgeon Simulator’ out now for iOS