SEGA today announced the commencement of a new season and update to Kingdom Conquest II on the App Store and Google Play. 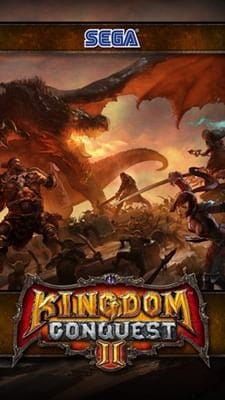 With the opening of the second season, players can have their armies battle in a new duelling system by pitting their monsters against each other in the Battle Arena. Other additions include the Demon Race with its powerful attack parameter, and the mighty Dragon Race with high attack, defence and siege parameters. Alongside the release of these new races, powerful Commanders will be introduced continually to lead the battle throughout Magna. New mechanics have also been added such as orbs that will strengthen monsters.

Adjustments have been made to the balancing of facility capabilities and constructible military outposts. The Commanders abilities have also been adjusted to offer players even more strategic choices.

It is a time of war and chaos in the land of Magna and massive armies battle for resources and ultimate domination. Which alliance will capture the soaring Debris Towers of Magna to find glory in the land of monsters?

With its deep multiplayer experience and console-quality graphics, Kingdom Conquest II brings mobile strategy games into the next generation. Taking the best elements from card battling, real time strategy, and MMORPGs, Kingdom Conquest II allows players to engage in a truly massive campaign of conquest and submission with a level of complexity previously unseen. Players can choose from five classes and then dive into a world of high stakes diplomacy where alliances with other players can be forged in battle and the conquered submit to your will. Kingdom Conquest II allows up to four players in co-op mode to battle through dungeons in real time to capture monsters. Ambitious conquerors can purchase monster packs to assist in their war for domination. With in-game auto translation assistance, alliances can be made with players form around the globe.

Andrew Edneyhttps://moviesgamesandtech.com
I am the owner and editor of this site. I have been interested in gadgets and tech since I was a little kid. I have also written a number of books on various tech subjects. I also blog for The Huffington Post and for FHM. And I am honoured to be a Microsoft MVP since January 2008 - again this year as an Xbox MVP.
Previous articleMy Movies Home and Essentials Server Solution 2.14 PR 2 released
Next articleCrysis 3 Patch G Released for PC, Xbox 360, PS3