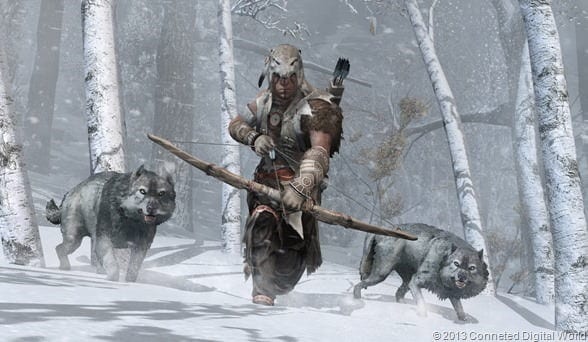 Ratonhnhaké:ton awakes in a familiar place, but everything has changed. Caught in the middle of violence and confusion, he finds himself confronting the Mad Kind – George Washington.

And that is how part one starts – Ratonhnhaké:ton wakes up next to his mother, and immediately he senses that something isn’t right – after all, she’s supposed to be dead! He doesn’t quite know what’s going on but he senses everything is different. He isn’t Connor, he never became Connor, he is Ratonhnhaké:ton.

From then on it’s classic Assassin’s Creed III gameplay – going from mission to mission, fighting, killing, rescuing and getting that bit closer to the Mad King. This whole part is set in the Frontier, so will seem familiar, but different. 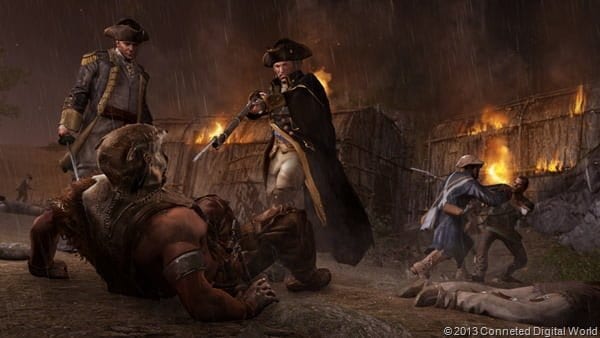 There is even a sequence were you have you use a cannon, yes, you read that correctly, a cannon to stop the approaching armies. And did I mention horseback riding?

There is a nice sequence around the mid-point of the episode where Ratonhnhaké:ton’s mother gives him something of his fathers and goes to explain what they are what his father one – obviously we know all about these items and so does Ratonhnhaké:ton, even though he can’t quite explain why. It’s the classic “suiting up” sequence from any heroic story and it’s nice to have some familiar weapons to help the struggle.

Ubisoft said that this story is considered Canon, and this certainly helps to ensure that this is the case.

One thing that is new to this DLC is that each episode will give Ratonhnhaké:ton a new ability which will help him throughout all the parts of the story and transform the gameplay into something new. In order to receive each new ability, Ratonhnhaké:ton has to visit the Sky World and complete a task and upon successful completion he will receive his new ability. 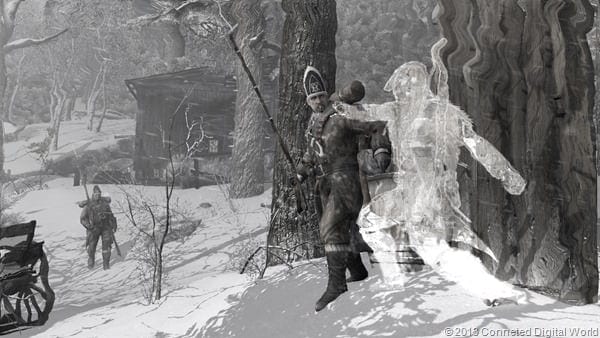 in The Infamy, the new ability is called The Wolf Cloak and this gives him the power of invisibility. There is a lot of stealth elements needed to complete this part and the Wolf Cloak proves invaluable. However it does come with a price – while it is being used your health will slowly reduce, so if you are not careful the cloak will stop working at the worst possible moment and you will have no health left so it will be fairly easy to die!

The other ability the Wolf Cloak brings in the Wolf Pack. This ability sends forth a pack of invisible wolves which will go and attack anything in range. This is not only great for dispatching a large group of enemies, but also for helping with distractions. 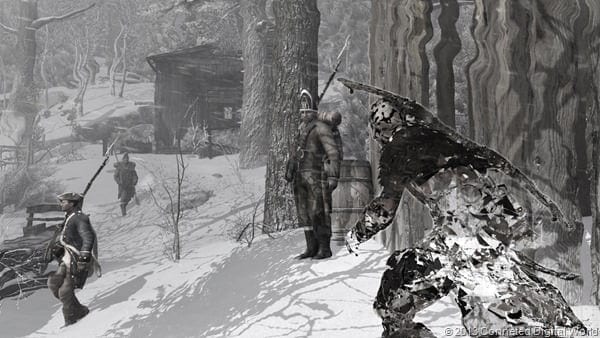 There are numerous missions throughout part one with names such as “Sky World Journey”, “One Man Wolf Pack” and “Path of Revenge”.

If you play a lot of Assassin’s Creed III, then the first thing you will probably notice, other than the fact Connor isn’t Connor, is that the art style is much grittier and darker. This is used very well to show how different this “reality” is, and added to that the music for this part is amazing, and really adds to the atmosphere. There is a sequence in the game (I’m not going to spoil it by saying which one, but you will know which one I am referring to when you get there – trust me) that literally made the hairs on the back of my neck stand on end. Once again the music is composed by Lorne Balfe and he has done a wonderful job.

The addition of the new abilities really adds to the game – and with each part you get a new ability and you will be able to use them together. And I am really pleased with how Ubisoft handled this new timeline – they could have just taken Connor and put him in this new timeline without any thought for the Assassin’s Creed story, but they have really given it a lot of thought and I am pleased with the outcome.

And like any good episodic story, this one ends on a cliff-hanger!

The Infamy will take you somewhere between an hour and a half to two hours to finish, with the all three parts taking around 7 and a half hours. It is important to remember that even though it is split into three episodes, it’s really one 7 and a hour story, so keep that in mind when you consider buying it. The Betrayal, which is episode 2 will be available on March 19th, but more on the soon, with the final part, The Redemption out in April.

I have tried to steer clear of giving too much of the storyline away because I don’t want to ruin it for anyone – I really enjoyed part one, and like any multipart story it can be a little slow at times, but that doesn’t detract from the enjoyment at all, and I can’t wait to play the other parts to see how the story progresses.

If you are a fan of Assassin’s Creed III, then this is a must have addition, with the only frustration being that you have to wait for the next parts once you get to the end of this one.

Assassin’s Creed III – The Tyranny of King Washington: The Infamy is available today.

And you can watch a few minutes of new gameplay footage here and also watch our exclusive Interview with Marc-Alexis Cote.

Andrew Edneyhttps://moviesgamesandtech.com
I am the owner and editor of this site. I have been interested in gadgets and tech since I was a little kid. I have also written a number of books on various tech subjects. I also blog for The Huffington Post and for FHM. And I am honoured to be a Microsoft MVP since January 2008 - again this year as an Xbox MVP.
Previous articleDrive Bender v1.4.7.8 rc1 (Tomcat) for Windows Home Server 2011 and SBS Essentials 2011 available now
Next articleAssassin’s Creed III The Tyranny of King Washington DLC episode 1 The Infamy gameplay footage