Episode 2: Starved for Help of the iPad version of The Walking Dead game out this week

At E3 we were treated to a hands-on preview of Episode 1 of the new iPad version of the The Walking Dead game from TellTale games. This week see’s the release of Episode 2 – Starved for Help. 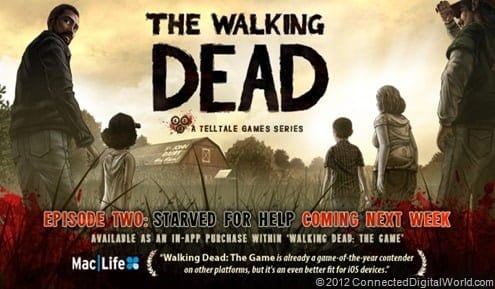 The Walking Dead is a five-part, episodic game series set in the same universe as Robert Kirkman’s Eisner award-winning comic books. Play as Lee Everett, a man convicted of a crime of passion given a second chance at life in a world devastated by the undead. With corpses returning to life and survivors stopping at nothing to ensure their own safety, protecting an orphaned girl named Clementine may offer him redemption in a world gone to hell.

Since Starved for Help is available via in-app purchase, all you will need to do next week to get your hands on it is fire up Walking Dead: The Game (universal app), select the “Episodes” option on the main menu, and buy the episode from the subsequent screen! If you have already purchased the Multi-Pack, you will see a notification on the menu screen informing you that your episode is ready for download from within the app itself.

Episode Two – Starved for Help can be purchased individually for $4.99 or as part of the Multi-Pack, an Episode 2-5 bundle, for $14.99! Take advantage of the Multi-Pack and save 25% from the price of purchasing each episode separately as they are released in the future.

The iPad version is very responsive and play’s just as well as the PC version of the game.

Andrew Edneyhttps://moviesgamesandtech.com
I am the owner and editor of this site. I have been interested in gadgets and tech since I was a little kid. I have also written a number of books on various tech subjects. I also blog for The Huffington Post and for FHM. And I am honoured to be a Microsoft MVP since January 2008 - again this year as an Xbox MVP.
Previous articleSony Shows Off Upcoming Updates to the PS Vita
Next articleApple releases app for the iTunes Festival with 30 nights of free music