Nokia held an event in London the other day where they announced two new Windows Phone 7.5 handsets.  Read on for details. 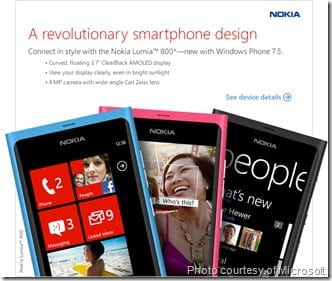 With the Nokia Lumia 800 every detail floats to life on the surface of the curved 3.7” ClearBlack display, bringing striking clarity, indoors and out. And with a seamless, deep-dyed body, and cutting-edge 8MP camera with Carl Zeiss optics, you’ve got a revolutionary smartphone in the palm of your hand. Specific colors vary by country. Check with your local retailer for more information.

This is a beautiful looking phone.  Technical specifications include WCDMA and quad-band GSM, perfect for European customers.  I was a little disappointed that there is no front facing camera, and if this handset is to come to the US, it will have to be on AT&T or T-Mobile as it is GSM.  Here is a picture that shows the handset: 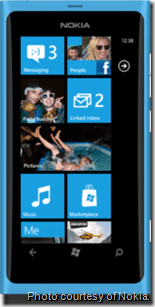 The phone can be preordered now.  Vodaphone is charging £199 on pre-orders.

The Nokia Lumia 710 with Windows Phone. A different day, a different look. Xpress covers can be swapped out for an extra splash of color—and even matched up with your Start screen. Not to mention the super-fast Internet Explorer Mobile web browser, which lets you follow the next big story in real time, with easy online sharing to bring friends into the conversation. Specific colors vary by country. Check with your local retailer for more information.

Get your social network updates in one place

This is also a quad-band GSM and WCDMA phone, and also lacks a front-facing camera.  Here is a picture: 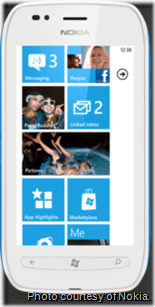 There are currently no pre-order options for the 710.

Microsoft and Nokia are off to a good start with these phones.  Neither phone is 4G, and these are single core processors onboard, so they lag behind the latest Android handsets, but I have high hopes for Windows Phone 7 handsets as they continue to roll out new phones.

The first physical retail store for Microsoft in the...
Android