Yesterday RIM launched BBM (BlackBerry Messenger) 6, and it’s all about the social experience. 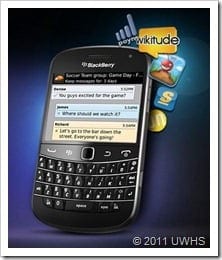 London – BBM™ (BlackBerry® Messenger), one of the largest mobile social networks in the world is now enabling a new and revolutionary social experience. Research In Motion (RIM) (NASDAQ: RIMM; TSX: RIM) today announced the availability of BBM version 6 (BBM 6), which provides support for “BBM connected” apps, allowing users to easily interact with each other from within the BBM connected app.

BBM connected apps integrate the popular functionality of the BBM service and offer users the ability to interact with their friends from within the app itself. For example, with a BBM connected game app, users can invite their BBM friends to join them in a game and then chat with one another in real time while the game is being played – without ever leaving the game app.

“BBM 6 marks the beginning of an even greater social experience for BlackBerry smartphone users,” said Alistair Mitchell, VP, BBM Platform & Integrated Services at Research In Motion. “It also represents an incredible opportunity for developers to leverage the viral nature of the BBM service and we have already begun working with various developer partners who will be bringing their BBM connected apps to BlackBerry App World this week, offering users highly engaging app experiences.”

Some of the additional functionality users can expect to see with BBM connected applications include the ability to:

The BBM 6 software is available now at www.blackberry.com/blackberrymessenger. A selection of BBM connected apps will also be posted on BlackBerry App World this week, with many more expected over the coming months.

Andrew Edneyhttps://moviesgamesandtech.com
I am the owner and editor of this site. I have been interested in gadgets and tech since I was a little kid. I have also written a number of books on various tech subjects. I also blog for The Huffington Post and for FHM. And I am honoured to be a Microsoft MVP since January 2008 - again this year as an Xbox MVP.
Previous articleThe Home Server Show Episode 145 Out Now
Next articleAmazon Announces Digital Video Licence Agreement with NBCUniversal Domestic TV Distribution

Are you looking for a screen protector for your iPhone 12 Pro Max that also provides privacy? If so here is our review of the ZAGG InvisibleShield Glass Elite Privacy + Screen Protector.
Phones

Here is our review of the realme 7 5G smartphone.
Apple