So it is great to see that today Tranquil PC have announced the launch of their new SQA-5H Windows Home Server which is powered by the new Intel D510 CPU. 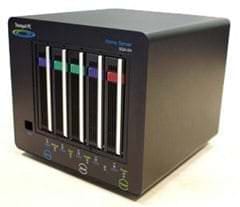 We did a review of the Series 1 model last year which you can read by clicking here.

We hope to have one for review shortly, so watch this space.

For now, you can read more below.

Tranquil PC are pleased to announced the immediate availability of the SQA-5H Series 2 Home Servers.
The established 5x HDD Home Server systems are powered by the latest D510 CPUs from Intel.  This latest CPU is a two chip solution (The D510 – CPU/GFX and the NM10 – I/O) – compared to the previous regular 3 chip solution.  This new CPU + controller has a total TDP of 15W – over 50% power saving when compared to the original systems.

Running the very latest builds of Windows Home Server (PP3) from Microsoft and the AVA Media Add In, the SQA-5H are ideal not only for Home Server duties, but as a tool for automatically creating and centralising your Home Media

Andrew Edneyhttps://moviesgamesandtech.com
I am the owner and editor of this site. I have been interested in gadgets and tech since I was a little kid. I have also written a number of books on various tech subjects. I also blog for The Huffington Post and for FHM. And I am honoured to be a Microsoft MVP since January 2008 - again this year as an Xbox MVP.
Previous articleMicrosoft Keynote at CES – Starting Soon
Next articleCES News Round Up – Day 2 (Sort of)