It could be said that the most important component in any Windows Home Server, or desktop computer for that matter, is the hard drive. The hard drive is what WHS uses to store all of your data and the more hard drives you have, the more storage you have available.

Samsung have released a new set of hard drives called the F2 Series EcoGreen hard drives. They come in either 500GB, 1TB or 1.5TB variants – and all of them are SATA drives. For this review I am looking at a 500GB model. 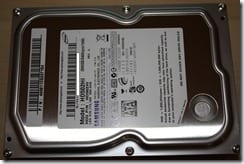 Samsung’s new eco-friendly hard drive utilises its low noise operation technology SilentSeek and NoiseGuard to achieve a quiet operation system. A reinforced flying on demand (FOD) technology controls the distance between the disk and the head, a safety measure to protect the head and raise the stability of data stored on the disk.

So, what does that actually all mean?

SilentSeek and NoiseGuard is the name of the technology that Samsung use to to minimize the mechanical excitation generated by any resonance, virtually eliminating the source of seek acoustic noise. So basically, in simple terms, it means that the drive is quiet during operations such as read and write. Very quiet!

The “Green” drive lowers the amount of power required to run it, hence the “green” status. So if you are trying to reduce your spending on electricity, or you just want to do you bit to protect the environment, then going green won’t compromise your needs. Samsung claim that the drive consumes 43% less power in read/write and 57% less in idle than competitor’s 7200rpm drives. Which is quite a statement to make. 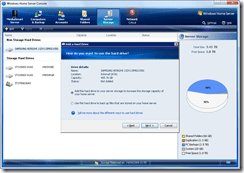 Overall I am very impressed with this drive. It is very quiet and the temperature was a good 15 degrees lower than the Seagate drive I also had in my test Windows Home Server. And even though the drive is only 5400 rpm, it still appears to be very fast. Samsung state that it actually performs at current 7200 rpm drive speeds, and to be honest, I can believe it.  I can’t wait to get my hands on the 1.5 TB variant.

The 500GB variant I tested can be purchased for less than £50 in the UK, and even cheaper if you look hard enough.

This is a very good, low cost addition to any system, and I will be using it when I build my next Windows Home Server in order to keep the costs down.

Well done Samsung, you have a new fan!

Andrew Edneyhttps://moviesgamesandtech.com
I am the owner and editor of this site. I have been interested in gadgets and tech since I was a little kid. I have also written a number of books on various tech subjects. I also blog for The Huffington Post and for FHM. And I am honoured to be a Microsoft MVP since January 2008 - again this year as an Xbox MVP.
Previous articleHow to install or remove an Add-in for Windows Home Server
Next articleHP MediaSmart 2.5 Update Now Available

Will you take the red pill or the blue...
Reviews

https://youtu.be/8BrjjG7I_nA What is Dandy Ace? Dandy Ace is an over...
Reviews