Have you ever heard the cooling fans on your Home Server kick into noisy mode and not known why or is the performance of your Home Server not as snappy as you expect it should be? Well here is an Add in that might be able to help you resolve those issues without having to Remote Desktop in or connect a keyboard/mouse/display to your Home Server.

WHS Tasks Viewer presents the running processes in a simple two pane view within the Home Server Console along with some spiffy little graphs showing various metrics over time.

Installation is as simple as simple can be, at least in computing, copy the Tasks Viewer MSI into the Software\Add-ins folder on your Windows Home Server then, using the Home Server Console install it as you normally would an add in.

Installation takes a couple of seconds and then the Home Server Console will restart and voila a new Tasks Viewer tab to play with.

Tasks Viewer isn’t the most beautiful of applications but it is functional. The left 70% of the Tasks Viewer tab displays a list of running “Tasks” on your Windows Home Server with six columns of data showing the ID, Process Name, Session ID, Private Memory Usage, Virtual Memory usage and a nice little graphical view of how much of the CPU time each “Task” is using. 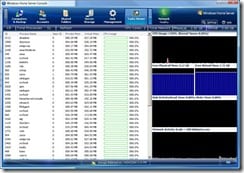 The remaining 30% of the Tasks Viewer tab shows up to five graphs, arranged vertically, showing CPU Usage, Free Physical Memory, Free Virtual Memory, Disk Activity and Network Activity over time. These are pretty basic views with no legend or markers on them so it can be at times a little taxing to read them.

At the top of the screen, below the Windows Home Server tabs, is a single toolbar that contains a Kill button, a list of the total number of running processes, a refresh button (if the refresh isn’t fast enough for you as is you can click this) as well as some very basic information on your Windows Home Server (Number of CPU Cores and Total Physical and Virtual Memory).

Clicking on the Settings button followed by the Tasks Viewer button will display some configuration options that allow you to specify how often the Process List and Graphs update as well as enabling/disabling the various graphs and altering their colours and a couple of other properties. 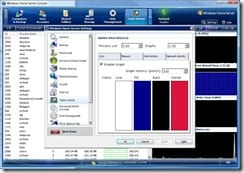 Tasks Viewer is a very simple application to use, look at the Process List and find the process using the most CPU Time or Memory and then determine what you’re going to do about it.

For a non-technical user this is the problem with this add in, showing the information is one thing but knowing what to do with it is another. The Kill button is a very dangerous word to have here and even Microsoft use “End Process” instead in Task Manager, pressing this button will ask for confirmation that you want to end the selected process but in doing so it may damage your computer and there is no additional verification by the add in or Windows Home Server that what you’re doing is not going to be dangerous.

I did discover an issue with the Kill button, when the kill confirmation dialog appeared I selected No to killing the process and got myself into an infinite loop where I had to quit the Console in order to get out of the loop, nil points for Tasks Viewer there.

Turning off the graphs is something I did straight off the bat, they’re a little crude for me and actually don’t tell me much of anything without points of reference, a legend or even scale lines. Doing this was simple but I discovered that the 30% space that the graphs occupied remained a big white space afterwards, the add in did not reclaim the space and use it to present the Tasks list in a wider space. A disappointing User Interface design there but one I can appreciate as many times I’ve forgotten or had trouble writing the resize code for applications myself 🙂 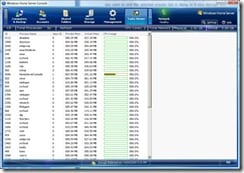 The default Tasks Viewer columns for each process is very basic and it would be nice to remove some of columns or add other ones in their place, unfortunately there is no way to customize this that I have found or change the default behaviour of the CPU Usage column to be a number instead of the progress indicator.

One thing that has bugged me majorly is the mixed usage of Process and Tasks, personally it is not tasks but processes that run on a computer and in a few places Process is used but the name of the application is Tasks and it can be a little confusing, hopefully we’ll see this addressed in later releases where a single term will be used consistently in the add in.

You’re sounding rather biased and negative

This review does sound like I’m really not enjoying this Add in and I’m “doing a job” on it but that’s not what I’m intending. Feedback is an important thing in ANY development and this is my feedback, in all honesty I actually have found a use for this add in and when I do use it I’ve enjoyed the simplicity and presentation of it.

It has saved me on three occasions just today using Remote Desktop, checking the Tasks list I was able to see that my Anti-Virus solution was using a little too much CPU time and slowing my WHS down, a quick kill of the A/V process and all was good again.

The User Interface is simply and functional, I’ve said that and that is a good thing. I can find information quickly and without any hassle, updates from the WHS occur quickly and the add in is just “snappy” which I really like. I think the developer has built functional and in later releases they will address issues that are raised.

I can see a use for this in my WHS toolkit and I hope that the developer does take what I’ve written as feedback and continue developing it.

Tasks Viewer is could be a very useful tool for the WHS Administrator’s Toolkit, what it presents isn’t new but it does so in a way that would save time in having to connect via Remote Desktop or finding a Keyboard/Mouse/Display to plug into your WHS.

There are issues with the add in as I’ve stated but it is functional and works very well. If you’re an intermediate/advanced knowledge of computers then this add in could be very useful for you to have available.

You can download the Task Viewer Add-in from here.

Phil Bevanhttp://
An Englishman by birth Phil Bevan has since moved to Australia where he works as an IT Consultant. He spends a lot of his time as a Shoutcaster and Community Liaison trying to be the eSports equivalent of John Mottson.
Previous articleInstalling the Disk Management Add-In on Windows Home Server on a Friday night
Next articleHow to install or remove an Add-in for Windows Home Server

Will you take the red pill or the blue...
Reviews

https://youtu.be/8BrjjG7I_nA What is Dandy Ace? Dandy Ace is an over...
Reviews