Right now most thoughts for Doctor Who Series 12 are heading towards the now confirmed two part series finale, which is no doubt going to be rather huge. So what we have to look forward to with Episode 7 ‘Can you Hear Me?’ is the standard “watch from behind the sofa” story. But this could be a cracker if the description is accurate and had a similar feel to “Amy’s Choice’ which saw the Dream Lord take on the 11th Doctor as the story moves from ancient Syria to present day Sheffield, and out into the wilds of space, something is stalking the Doctor and infecting people’s nightmares.

We open for the first time in quite a while with an intro to the story the credits as it starts in Ancient Syria, a woman gives warnings of monsters coming for the people but her friend simply dismisses them as simple nightmares and is not believed. When night falls,  the monsters do come and amongst the screaming the woman who knew the truth called out “they like it more when you struggle”.

I have to admit, next to the big lore changing series episodes like Spyfall and Fugitive of the Judoon, this episode is easily my favourite so far this season with a real sense of delicacy to the reveals and a pace in story telling that allowed for moments to linger with a lovely almost pantomime “he’s behind you” element to the story. I appreciated that right after the credits we actually saw the Doctor returning Team TARDIS back home to Sheffield so they could revisit their lives, all be it later than the team actually planned to be. This is finally seeing what was said earlier in the series about the Doctor travelling back to Gallifrey on her own, encouraging the team to return to their lives to take a break from TARDIS life but now instead we see a restless Doctor not knowing what to do with her own free time but it never goes as far as to see her showing the anger or emotion of her trips to Gallifrey, just a fun little moment before she senses something is wrong and takes the TARDIS to Ancient Syria, arriving moments after the attack seen in the intro. 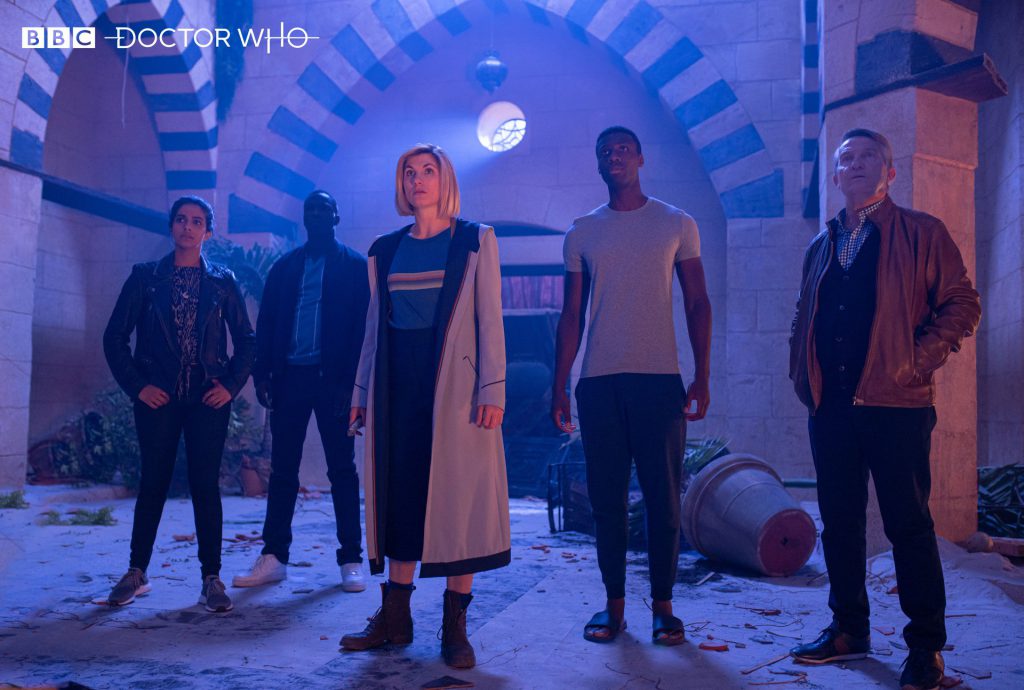 The strength of the story telling really comes in the performance of the guest stars to the episode and particular mention goes to Ian Gelder, who plays a mysterious entity who manages to appear on the TARDIS before the Doctor leaves for Ancient Syria but is not seen by her or sets off any of the TARDIS defences, a running theme of this series seems to be the pushing back on the whole “Nothing can force entry into the TARDIS”. The way in which his character is revealed is subtle but impactful, giving him all the creepy sinister moments that no doubt had youngsters and some adults reaching to watch behind a cushion or sofa. The special effects used for his appearing and vanishing remind me of old school magician smoke bombs but its the quiet manner in which Ian Gelder delivers every line and every moment on camera he just steals the show each and every time.

Getting to see Team TARDIS back in their individual lives was perhaps the more interesting of the themes this story brought to the service. Yaz returns home to see her sister on the anniversary of something not revealed until the end of the episode whilst Ryan goes to see a friend who has been leaving him text messages revealing that it has been months since they all returned home. Graham, well he meets up with old friends for a game of cards. There is a strong theme of re-connection as Ryan is shown to be the one his friend has been reaching out for in his time of need whilst he was off having adventures with the Doctor whilst Yaz is missing out on the simple things like discovering her sister has learned to cook. The audience can often get lost in the excitement that the ‘companions’ represent on the adventures with the Doctor, but it is really not since Sarah Jane Smith, that we see what happens when a companion returns to a life without the Doctor. Team TARDIS have gradually and more deliberately so this series, have all had moments where they are realising how different they are to the people they were before they met The Doctor and stepped inside the TARDIS. It is a theme that would return towards the end of the story as well. 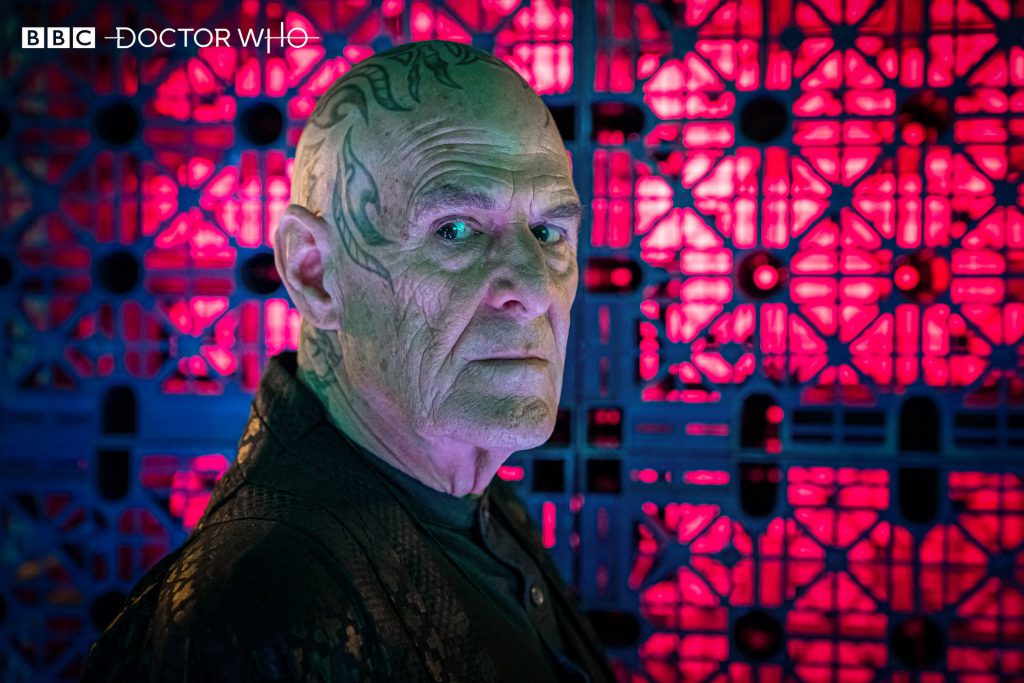 The big bad of the episode was exactly that, big and bad as the character played by Ian Gelder is revealed to be Zellon, an immortal which the Doctor believed was a myth but became all too real as he crossed time and space in order to cause people to suffer their worst fears so he can drain that dark energy….with his detached fingers….very creepy. There is yet more referencing of crossing dimensions as Zellon reveals that he “came to this universe”, continuing the theme that has run through Chibnall’s of putting enemies in the path of the Doctor that she has no knowledge of or has met before. Jodie has really perfected the “what are you” reaction before ultimately finding a solution to save the day and though it is becoming almost a ‘multiverse’ experience now for Doctor Who, what I felt was a lazy way of just bringing in a new threat to the show, has actually paid off with this story.

Yet again this episode was co-written by Chibnall in partnership with Charlene James and there really is something rather solid when the show runner has an input into the writing the episodes of a series, which is not always the case and something that was very evident about Series 11 was in how many of the stories felt throwaway and some even managed to get the basics of British Sci-Fi story telling with Doctor Who so completely wrong. But the writing for this episode managed to give every member of Team TARDIS to have great character moments on screen rather than using them as background scenery. Whilst Yaz again has the main stage from them as we are taking back three years to a Yaz trying to run away from her life and family only to be persuaded to stay by a female police officer, but we see Ryan feeling the guilt of not being there for his close friend due to him being away with the Doctor. Finally we have Graham who through his own nightmare, reveals that his one fear is being told his Cancer has returned.

Where this leads to is overall open a conversation about mental health but not with the sledgehammer preaching approach the social commentary can often be delivered with as of late. It is softly handled by showing that each of Team TARDIS have the need to talk to others about how they are feeling and that by travelling with the Doctor, this has stopped as who would believe them back home. With Graham, its the people who know what he went through and understand his survivor’s guilt and for Ryan its being there for a close friend who is struggling with his own mental health and the person he feels can help is no where to be seen.

It is through Yaz that we seen an example of someone at their lowest point, wanting to run away due to feeling helpless but having someone just stopping to talk them through it or just finding others to share what you are going through can be a source of help. I felt it was beautifully handled and by using Yaz as an example would have resonated with some of the audience and just to let them know that they are not alone in having doubts or fears and that talking to some one can help.

‘Can you hear me?’ was easily my favourite episode next to the big series story arc revealing ones and it ticked every box for me which I am very happy to say. We are now only one episode away from the two part series finale and I can say I have enjoyed this series far more than last year. Big things are still to come and there is a lot that Chris Chibnall has to make the landing on in order for some of the big lore changing moments to work.

If the lessons from this episode and from Spyfall and Fugitive of the Judoon can be taken into Series 13 should Chibnall carry on his tenure as show runner, we might just be in for something special.

Sean McCarthy
Freelance writer but also a Gamer, Gooner, Jedi, Whovian, Spartan, Son of Batman, Assassin and Legend. Can be found playing on PS4 and Xbox One Twitter @CockneyCharmer
Previous articleThe Town of Light: Deluxe Edition is Out Now on Nintendo Switch
Next articleDoctor Who Series 12 – Episode 8 ‘The Haunting of Villa Diodati’ Trailer

Back in September 2019, the LEGO Group launched its first-ever mixed reality range called LEGO Hidden Side, here is our review of the new Newbury Subway set that just launched.
Read more
Movies & TV