We are finally here, a full year since the 13th Doctor last had an adventure on TV with Resolution, comes the kick off episode of Series 12 (since reboot) for Jodie Whittaker’s Doctor. The last series did not go down well with fans or critics and I was resoundingly disappointed with how new Doctor Who show-runner Chris Chibnall performed with this first series. With criticisms thrown at this terrible attempts at Sci Fi, an obsession with using real historical events and the failure of ‘Team TARDIS’ to be anything more than an excuse for lazy filler episodes, it is going to be interesting to see what lessons were learned and what feedback was taken on board for this new series.

What we start with is the first episode of a two part story for Chris Chibnall with Part One showing today New Year’s Day and the follow up coming this Sunday January 5th as the show returns to its now main Sunday evening airing on BBC One. If the trailer and screenshots were not already a hint but the title ‘Spyfall’ does have a rather “time to parody a James Bond Film about it” but the trailer does hint that could be rather fun and going by the global opening where three seemingly undercover agents on missions are taking out by a mysterious creature able to appear out of solid matter.

Once the opening credits are done we find the human members of Team TARDIS all back home but all preparing to go travelling with The Doctor again hinting that they have returned home for some time since we last saw them defeating a DALEK with a Microwave oven last New Years Day. Mysterious men in black suddenly appear to collect them including the Doctor, who is in a garage working on the TARDIS…a nice little bit of British-ness UK fans will appreciate. A solid car chase gives a further hint of the more action focused sections this series could possibly have unless this opening episode has used up a lot of the shows budget for series 12 as there are many practical stunt sequences in a very global setting as the story moves from England to the US to Australia. 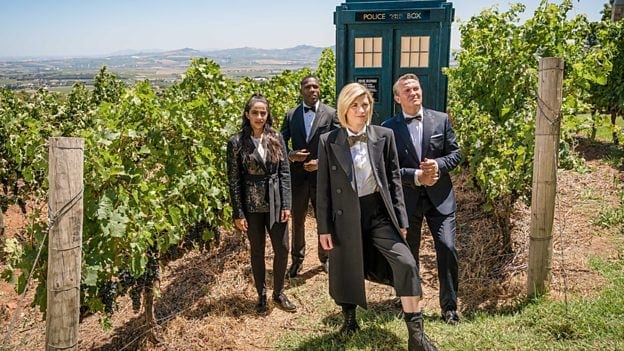 I really enjoyed the guest stars this episode has with Stephen Fry playing the role of “C”, head of MI6 and the man responsible for gathering up The Doctor and Team TARDIS although, not sure it was really needed for the less than subtle reminder that The Doctor has changed gender but it was also a lovely way to allow for a more valid reason to bring up that both Torchwood and UNIT are no longer functioning in the Doctor’s world with the Doctor having to update “C” that the very bodies responsible for defence again extra terrestrial threats are no longer with us, perhaps an attempt to make up for the terrible Brexit joke from last series.

Lenny Henry is quite exceptional as the Bond Villain character Daniel Barton, creator and CEO of VoR, the latest attempt to have a ‘if Google and Facebook went full evil’ level entity in the world, with MI6 believing that he is responsible for what is happening to spies from every nation being mysteriously terminated on mission. I really liked the face to face confrontation between him and The Doctor. Both Henry and Fry are very recognisable guest stars but perhaps the biggest surprise was of seeing Sacha Dhawan,  whom Doctor Who fans will recognise from playing Warris Hussein, first Doctor Who series Director from ‘An Adventure in Space and Time’ featuring in the show as new associate of the Doctor who helps the team piece together this new threat, also gets to have the first reaction to seeing inside the TARDIS of the series.

But as after the opening 20 mins, it is back to Chibnall formula as Team TARDIS split up with Yaz and Ryan sent off to go undercover to investigate VoR using the standard ‘Spy Gadgets’ a certain 007 would have as equipment whilst The Doctor and Graham head downunder to meet up with the only alien expert MI6 had but fired in ‘O’. It is here that the old issues for me appear yet again to show the cracks in the very idea of Team TARDIS instead of just a companion for the Doctor. Yaz has the biggest showing in this episode, wonderfully played by Mandip Gill with her character still being brave and determined to get the job done. Graham, well Bradley Walsh is always good to see on screen and Graham is still the one line giving whilst calm headed member of the team but also seems to be the conduit into learning more about the Doctor, something that is made very clear is that the team still know very little about  the Doctor, but the tease is that Graham is keen to learn more about her. 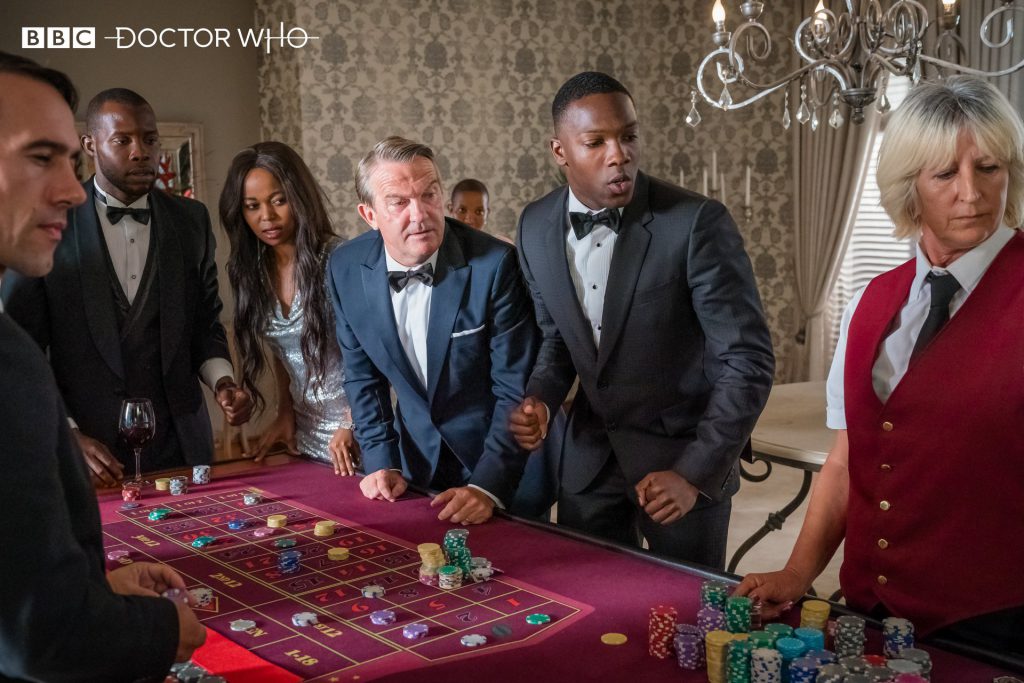 What is annoying is that again due to all the extra characters on board the TARDIS, the moments for Jodie Whittaker’s Doctor to shine are far too sporadic for me, something that has bothered me since her first series. I really want her Doctor to be the star and the focus of this new series and if part 2 of Spyfall can live up to this episode, it is a real possibility this time if Chibnall remembers that The Doctor is the main attraction of the show.

The weak link is yet again Ryan, who had a full story arc come full circle in the last series and in the New Year’s Day special in 2019. Now Ryan is cowardly and unsure of himself again, the total opposite to where he was at the end of Resolution this time last year. No explanation is given as to why he has suddenly become so timid and he could be removed from this story entirely and it would lose nothing at all. Used as a device to have someone for Yaz to talk to or to act really scared, in just one episode Ryan is written off and used as filler, which if this remains for the rest of the series, is going to be incredibly dull to see on screen.

Back to the positives and the new alien threat feels just that, a true threat to the Doctor, one of the only times where an alien that this Doctor has never met has given her genuine dread and you can feel it in every scene they appear and the Doctor is powerless to stop them or even identify who they are. It is a threat that certainly feels more credible than a Tim Shaw with teeth glued to his face. This episode feels more like a feature length opening to the series than a normal episode, the pacing is spot on even if you five allowance for the Ryan factor and the stakes feel real with the Doctor not in full control or knowing what is happening making the “to be continued” moment at the tremendous twist at the end even more impactful. 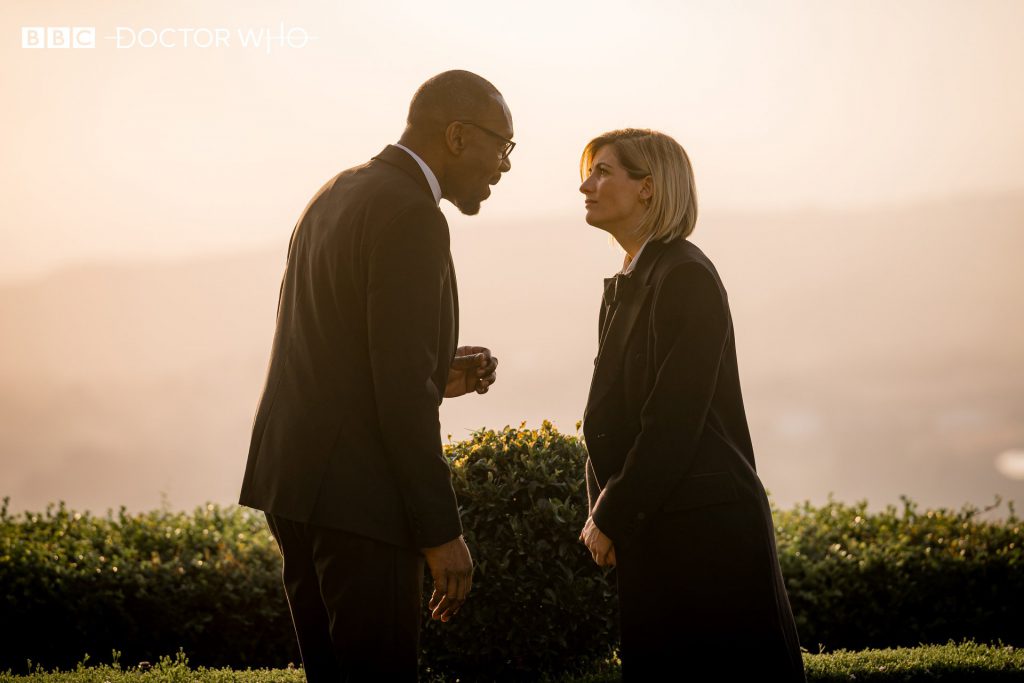 Spyfall Part 1 is a blend of silly fun, great action and a new alien that is truly threatening and this opening episode to Series 12 is a massive improvement on everything from Series 11 for me, it feels like a Doctor Who story but it sadly still suffers from issues such as The Doctor not feeling like the star of the story due to how much time has to be devoted to giving the members of Team TARDIS a reason to be there and other than Yaz and maybe Graham, there is still no real reason to have Ryan there, something I feel the show needs to address, reducing the size of Team TARDIS.

But it is the incredible twist at the end of the episode could quite frankly elevate this series to be something rather special if the execution of what has begun in this episode can be maximised. But one thing is for sure, Spyfall Part 2 is going to be must watch telly!

Sean McCarthy
Freelance writer but also a Gamer, Gooner, Jedi, Whovian, Spartan, Son of Batman, Assassin and Legend. Can be found playing on PS4 and Xbox One Twitter @CockneyCharmer
Previous articleLive and Let Die from The Folio Society
Next articleDoctor Who: Series 12 Episode 2 Teaser Trailer

Sports games in general have to walk...
Read more
Gaming