I am one of the many that when it comes to Call of Duty in recent years, the fatigue for each yearly release built up enough for me to put the series down. It just lost sight of what made it such a go to shooter and the desperate attempt to keep up with newer and fresher titles forced it to copy elements that never really suited it which only succeeded in fulling it with gimmicks features and instantly forgettable story campaigns. For me the pinnacle of the series was Call of Duty 4, which for me was a ground-breaking take on the modern shooter that sadly became diluted over the years. But when it was announced that not only was Infinity Ward taking the series back to the days of CoD 4 but also reworking it a bit, it definitely got my attention. Call of Duty: Modern Warfare finally won me back to the series.

No Call of Duty title is every without its controversy and this new take on the Modern Warfare series is certainly not shy of dancing with the moral ambiguity of a First-Person Shooter. Starting with the story campaign which for me, has definitely recaptured the impact and potency that made CoD 4 so exhilarating to play.

I really liked the reworked storytelling and narrative that drives the campaign in CoD MW, something I felt the series definitely needed after so many years. Instead of telling the story from the view point of a single lead character, the story campaign returns to focusing on the missions and the people who take part in them. Players will control different characters at different points of the story as the missions take place in different countries and locations around the world with such a quick pace that you never spend too much time in one character before the narrative and the action takes you elsewhere. From playing as an SAS rookie in Kyle Garrick to switching to the CIA’s “Alex” who is a very principled soldier, both of which end up working alongside CoD icon Captain Price on various missions throughout the campaign which adds that lovely punch to the moments where you share the action or dialogue with him. 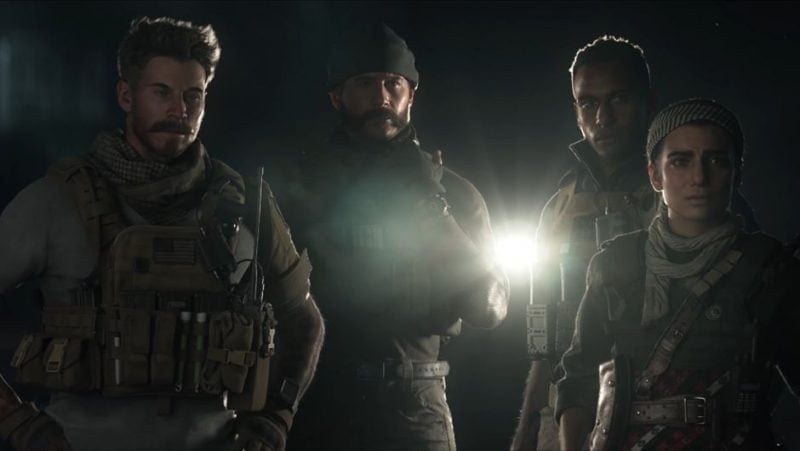 Where this campaign takes the series back to its roots in CoD 4 is just how the story resonates with the modern world and the constant fear of issues in the middle east leading to domestic terror attacks. As a Londoner born and raised, it was incredibly uncomfortable to play through the Piccadilly Circus terrorist attack level which comes in at the start of the game especially with an actual real-life attack just recently on Tower Bridge during the 2019 General Election. My emotional reaction to it was raw and it was very uncomfortable even though the level in the game is pushed to the extreme with a full fire-fight on the streets of London, an area I know really well. Then the action moves to “Alex” as he heads to Urzikstan to meet up with rebel leader Farah Karim in order to track down the stolen chemical gas that kicks the campaign off. Seeing how the CIA would be supporting freedom fighters on the ground is not that farfetched a possibility and goes to show by rooting the campaign itself firmly into a believable real-world situation, even though it walks that fine line of controversy and comfortability.

The player-controlled characters are well thought out, scripted and performed by the voice actors with special mention to Claudia Doumit who voices Farah Karim, who brings the emotion and passion that someone fighting against the odds to free her homeland whilst battling to keep those around her as well as herself safe every day. It is the different perspectives from the main characters in the story that give it the large scale feel as they are all soldiers fighting to defend their countries and people against those who would do them harm in the name of terrorism and it is in that tone, that makes the campaign grounded but also very raw. My favourite mission is the SAS attack on a suspected terrorist cell house in North London following the Picadilly attack and played out in complete night vision. Storming the house and clearing it floor by floor and room by room, with the night vision it is hard to know who is friend or foe and there is a legitimate nervous tension as you progress through the house, as breaching a room could lead to finding armed terrorists or innocents putting a genuine fear of killing an innocent as some rooms have women and children. One moment happens so fast that you honestly believe for one moment that you have actually killed an innocent woman until you are told that you did the right thing and she was going for a gun but if you do make the mistake, the mission continues but you are told off by Price.

The Campaign is an exhilarating experience but at parts, a very uncomfortable one but then, it should feel that way even for a video game story. This is the world we live in and just as this campaign story is not shy to use it as a narrative, it also takes care not to glorify the fight too much. Easily one of the best campaigns the series has had in recent years. 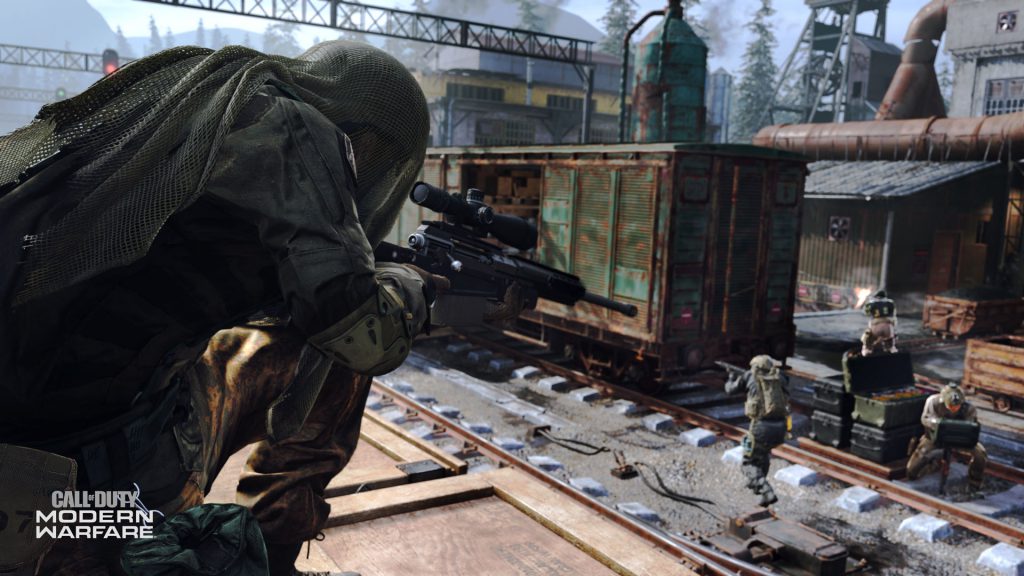 The Multiplayer was the biggest reason I put Call of Duty down as a shooter, it just became too gimmicky by taking anything from other shooter games and using it to an almost clumsy degree in some games. With CoD MW, it goes back to its roots but has more polish on some of the new layers that have been added in recent years to the shooter genre. The aim was clearly to bring back the elements that made CoD 4 so loved by fans, the game that changed all things Call of Duty and with this reboot of sorts, CoD MW has certainly managed to win me back over in 2019.

The action is fast paced which I like but has maps that allow for more strategic gameplay and tactics across the various modes available, which has lead to quite a lot of people camping in buildings to lie in wait for an unexpected player to blindly rush in only to meet a claymore mine or a shotgun to the face. In previous shooters, this strategy would annoy the heck out of me to the point where I would put the game down midway through a good gaming session just to protect the safety of my controller and the walls of my gaming room. But the respawn system has managed to alleviate this somewhat, with quick respawns that so far, do not punish you by putting you too close to the enemy team so you have a chance to get your bearings before getting back into the fight.

I also really appreciate the new filter system for matchmaking which allows players to tick the game modes they would prefer to play so that any unfavoured ones remain out of the search and  the game also has full crossplay between PC, PlayStation 4 and Xbox One with the very sensible ability to decide to opt out of it should you prefer to stick to your platform of choice, but the delicious temptation to battle friends on PS4 from my Xbox One X is very hard to resist at times. The familiar game modes return with Deathmatch, Kill Confirm, Hardpoint and others all go to modes for me but the new addition of “Gunfight” , a close counter 2 Vs 2 game mode is a surprising hit with me and it also allows for a cheeky 1v1 matchup in private games if you want to challenge your friend to see who really is the best (with the loser paying for take out when I play against friends).

Where the MP side has come into 2019 the most has to be in the adoption of the now commonplace Battle Pass system instead of a full season pass. This addition came in with Season One, which added three new maps for all players, finally removing the paywall between those able to afford Map Packs and those who cannot. Now everyone gets the new maps, which when I say new is rather loose as they have so far been reworked versions of original COD 4 MP maps which is just fine for me because now, they are free. Groundwar is obviously an attempt to steal some thunder from the Battlefield large map battles with the use of vehicles and big maps which I am still not convinced suits the Call of Duty arcade style of play but it is still a thrilling mode to grab some friends to squad up and take on. 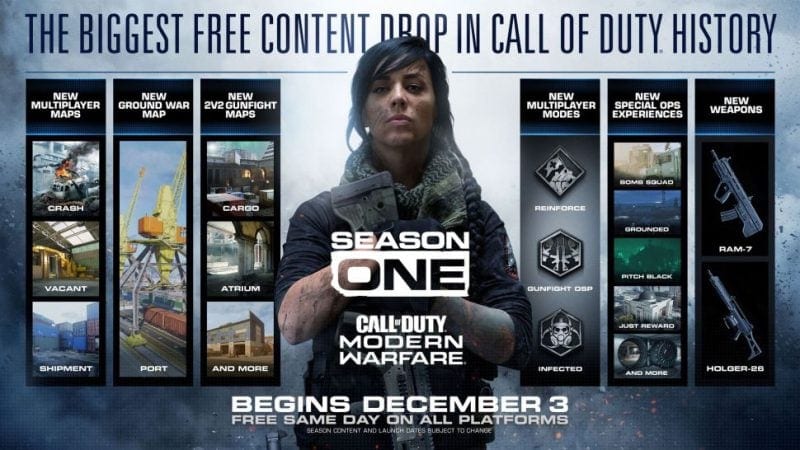 The battle pass will allow players to unlock new items and cosmetics by gaining in-game experience for simply playing the game. The battle pass comes with 100 tiers worth of content for players to unlock for those who purchase the full pass compared with the 23 tiers that free to everyone to unlock with the incentive being to buy the full pass to gain access to extra unlocks including new operators in use. This is a much fairer model than the traditional and often complained about Season Pass structure of previous CoD titles, and whilst there was some dissatisfaction at the launch content for the multiplayer, Season One has brought in free content and a cheaper player progression style with the Battle Pass that opens up the online to far more people than a very expensive Map Pack or Season Pass has in the past.

For me, Infinity Ward have hit the ground running on multiple levels with CoD Modern Warfare which for me I honestly had not expected. The Campaign is back to being the first stop you should make with a CoD title and the Multiplayer has all the fast-paced action that is only enhanced by crossplay action and the new modes like Gunfight. A recent leak suggests that the much loved Battle Royale mode, “Blackout” from last year’s Black Ops release, is also coming to CoD Modern Warfare at some point, if true then this is very much looking more and more the complete Call of Duty package the series has been lacking of in recent years.

With the promise of regular content drops thanks to the new Battle Pass and Season system, there is every reason to go pick this game up in the holiday sales going on right now, especially from Boxing Day.