September was quite the month for me as an Xbox fan and a fan of the Gears of War series. The epic experience begun on September 5th when I was lucky enough to attend the GEARS Ink event hosted by Xbox UK to celebrate the early access launch of the GEARS 5 Ultimate Edition to Xbox Game Pass Ultimate where not only was I able to get an incredible GEARS 5 inspired tattoo and meet the voice actors behind the characters of JD and Del from GEARS 5, Liam McIntyre and Eugene Bryd , but after getting home from the event and tuning into the live stream, somehow the gaming gods chose me to win the ultimate prize on the day….the brand new GEARS 5 Limited Edition Xbox One X!

Which arrived this week and so much love and thanks have to go to the amazing Xbox UK team who not only kept me up to date with how long the wait would be, they actually shipped a brand new console all the way from the US just to make sure the prize was in the best condition it could be which made the wait absolutely worth it. Everything about this console from the trailer above already had me close to drooling about how gorgeous this limited-edition console was, but my word was I completely blown away once I took it out of the delivery box itself. 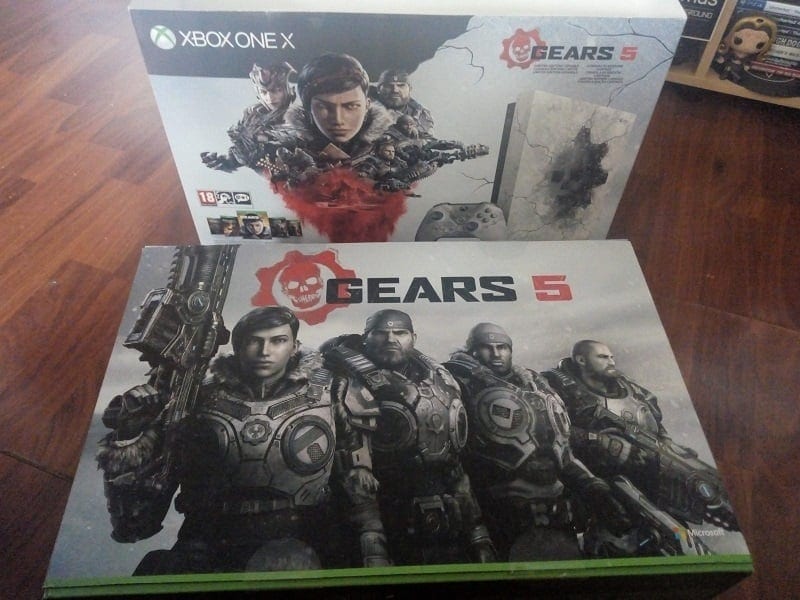 Now I have had some experience with Xbox limited edition consoles and I can happily say I still the stunning HALO 4 Limited Edition Xbox 360 which you will see a little later on, but often the packaging is just your pretty standard protection type designed to keep everything in the box including the console safe. What I had not expected was to see just how far the designed concept for this console bundle had gone as even the packaging itself was part of the entire wintery look of the GEARS 5 LE Xbox One X. Just removing the protective sleeve revealed another awesome art design which if my OCD need to keep boxes for EVERYTHING ‘just in case’, I would use it and frame it as it is just that nice piece of art. First things first, this is what you can expect when you open the box:

Next out of the box came the limited-edition Kait Xbox one controller which for those who do not know, is modelled after Kait’s very own Winter Protection COG armour in the game. It really is a stunning looking controller which is based on the new style of controller which features etched trigger grips as well as the now standard rubberised diamond grip on the back case to prevent slippage from sweaty hands from even the most energetic online battles. The colour scheme is just brilliant and I love the blue analogue sticks and triggers which highlight them even more from the grey of the main controller. But it is the Kait armour design that is so striking, it is even textured where on the front you can feel the ‘armour sections’ on the front as compared to my other controller, the Ocean Shadow controller where you can see that the front of it is just one clean panel. It really brings the Kait controller to life more to have that additional detail and I also like the extra Locust Symbol from Kait’s necklace given to her by her mother at the closing of Gears of War 4, on the battery cover although sadly mine looks a little rubbed off in places but I cannot tell if it is like that by design.

Now it was time to take out and get a closer look at the actual Xbox One X console and if you can describe a gaming console, this limited-edition Xbox One X definitely earns that title. Looking at the top alone showing the new winter Crimson Omen COG image with it appearing to be underneath the ice is simply as elegant and lush as you would expect. The ice is actually a translucent layer with the Crimson Omen physically layered below making it a fully 3D image when you look directly at the console itself. The cracking ice effect that spreads out on the top of the console from the central Crimson Omen image look incredible giving it a real texture when you run your hand over them with the but I did not expect was that those cracks, are actual cracks in the casing created using laser etching so it has the texture if you ran your hand over the case that just makes it all pop so much more. The underneath of the case is almost identical to the Kait controller with the locust symbol on the bottom but what came as another surprise was that the snowflakes which I thought were just an effect on the trailer, are actually painted onto the bottom of the console. It is the extra detailing that makes this easily one of the best custom consoles Microsoft has produced with a design made by the co-creator of Gears, Rod Fergusson.

What is abundantly clear from how this Xbox One X is designed, is that it is meant to be used in a vertical position, which thanks to nicely colour matched stand that came with the console allows owners to do. Now I do know the risks of possible laser burning damage on discs by running the Xbox vertically rather than the very sensible horizontal style, but around 75% of the games I play and review are digital, so for now, I am keeping it vertical to really just show off how stunning this console really is rather than hiding it in an entertainment centre which will cover the bottom and the top designs. Easily this console looks fantastic vertical and until I sense an issue using it this way, it is how it will stay.

The console also comes with the entire Gears of War game collection, well other than Judgement which I never liked anyway. The console contains digital codes for Gears of War: Ultimate Edition, Gears of War 2 and 3 and a code for GEARS 5 Ultimate Edition paired with GEARS 4. A Bonus is that the LE Console version of the GEARS 5 Ultimate Edition also comes with all the bonus skins that the other GEARS 5 themed items come with, so it has the ICE Kait skin that comes with the Kait controller if purchased standalone as well as the Lancer and other weapon skins that you get with the GEARS 5 Seagate External Drives. What this console also has is the ICE Jack skin and all these additional skins match the console’s Crimson Omen Logo under the ICE look which again, just pops on screen when they are equipped for the MP modes of the game which is something I will certainly use, I have been holding out playing the new modes and completing the campaign until the new console came and yup, will be diving back in.

Another surprise was when powering up the console for the first time and instead of the usual beep you get with an Xbox One, this X actually makes the sound of water freezing into ice as its start up sound and when powering it down, the sound of the ice breaking plays. Sometimes it is the little things like that which truly make it a customer console to have.

I do not really need to go into the performance of the console as by now we know that the Xbox One X is the most powerful gaming console on the market today but as someone who has yet been able to invest in a 4K HDR capable TV, considering this was a prize I never expected to win, I do have to say the performance jump from my now old original Xbox One is very noticeable thanks to the natural up-scaling the console does with regular games and especially ones which have been enhanced for the Xbox One X. I ran through Assassin’s Creed Origins and Odyssey to test out the visuals along with Borderlands 3, The Surge 2, Code Vein and Sea of Thieves and I did noticed a considerable improvement in the sharpness and vibrancy of the visuals on my TV as well as improved loading times and draw distance on a good few of them. 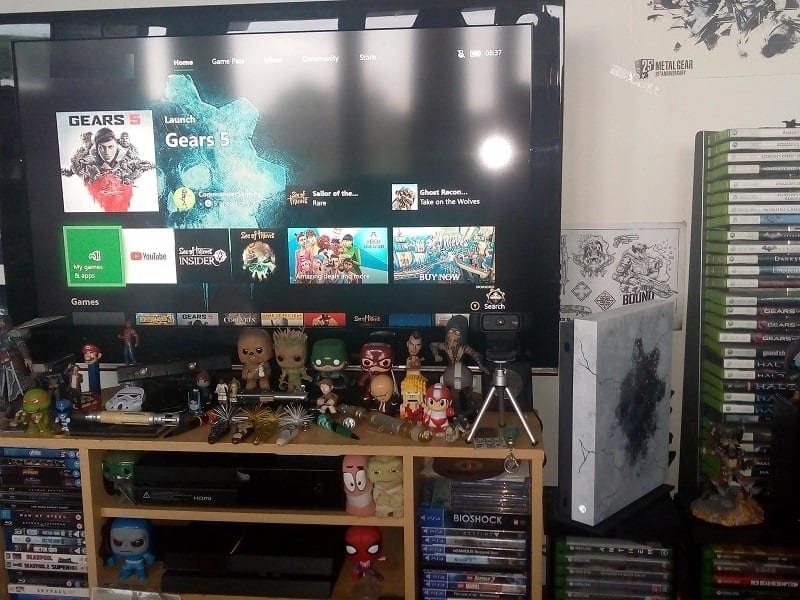 All in all, I am overwhelmingly impressed with the GEARS 5 Limited Edition Xbox One X console, having the now standard 1TB Internal HDD will come in very handy alongside my 3TB External drive, it runs almost silently compared to the OG Xbox One and the Kait controller compliments the outstanding design of the console itself. This is easily the best custom Xbox One X console that Microsoft have produced themselves and even if you are not a huge fan of Gears of War but looking to upgrade to the X, this is just a huge centre piece of your gaming set up that will have your fans drooling when they see it and have you smiling each time you go to do some gaming.

But if I am being really finicky, the only criticism I would have is not about this console or controller bundle, but I really wish that Microsoft would change the One Month of Xbox Game Pass code to no longer require it be used for non-Game Pass subscribers only, at this point Xbox really need to appreciate that those who are choosing to upgrade consoles might already be an Xbox Game Pass subscriber and realistically, with all the hard marketing Xbox are doing for the Xbox Game Pass Ultimate with so many 1 or 2 month  for £1/$1 style promotions they keep running, who right now is not an active subscriber so if the One month of Xbox LIVE Gold can go to existing users, the code for Xbox Game Pass should as well.

But nothing really takes away from what a true beauty the GEARS 5 Limited Edition Xbox One X console bundle is and I just have to thank the gaming gods along with Xbox UK letting destiny combine for me to win this exceptional special console.

To purchase this bundle from the Microsoft UK Store (currently £50 cheaper at time of posting) go here: https://www.xbox.com/en-GB/xbox-one/consoles/xbox-one-x/gears-5-1tb-le

We have finally reached the final normal...
Read more
Gaming