My Day at the Xbox UK ‘Gears Ink’ London Event!

There is no escaping the launch of GEARS 5 which if you purchased the GEARS 5 Ultimate Edition or are a subscriber to Xbox Game Pass Ultimate, you now have early access to the game from today (06/09/2019) and Xbox had certainly doubled down on the marketing ahead of the game’s launch. Across six cities around the world, Los Angeles, Berlin, Melbourne, Paris, Mexico City and our very own London, Xbox ran a special celebration event for the launch of GEARS 5 early access called ‘Gears Ink’ and yours truly managed to go to London….and it quickly became the most memorable day of 2019 for me! 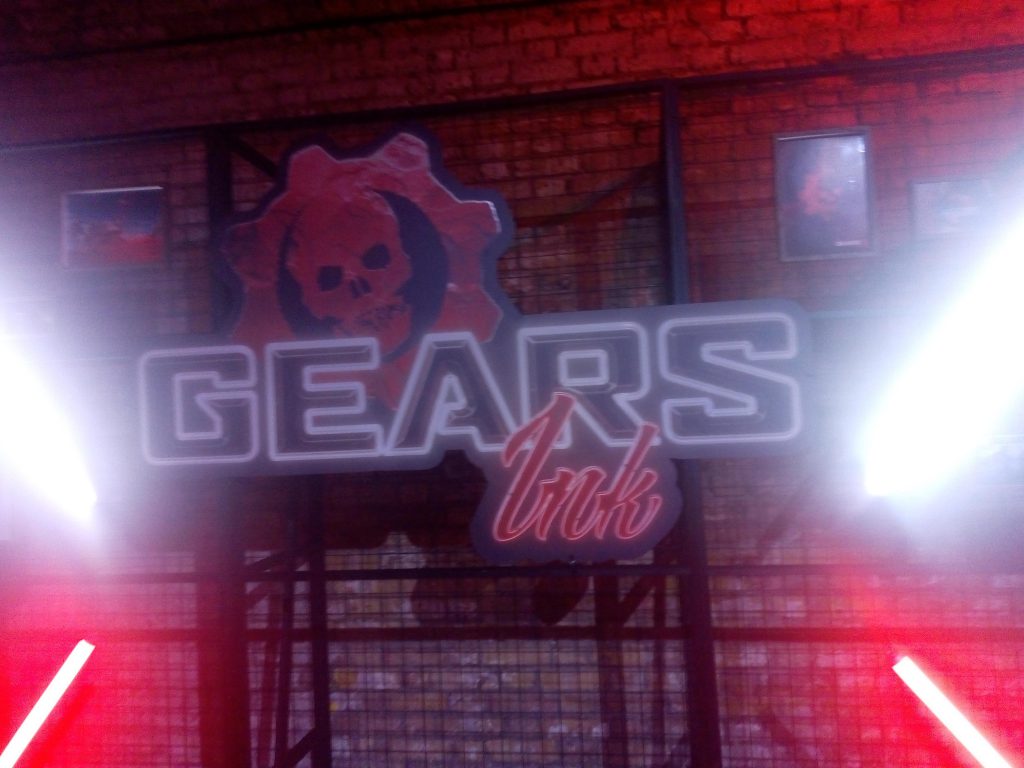 I have been fortunate and lucky enough to be able to go to press events and game launch events over the years, but the GEARS Ink event was truly something very special. I learned that the Xbox UK team took point on this event, with branding and concepts for the London Event that were then used for all the events across the six cities which is staggering but amazing to see the Xbox UK team getting that level of recognition, especially when XO19 will be held in London in November.

Arriving at the London venue, The Bike Shed in Shoreditch London, the vibe was already being generated just walking up to the place before being greeted at the door by the amazing Xbox UK team. Walking into the place and it immediately blew me away to see how the building had been decorated amazingly with the ‘Gears Ink’ branding and it looked great.

Guests at the event were also able to get first time hands on with the multiplayer modes of GEARS 5 and the brand-new co-op Escape mode which for me, will no doubt be my go-to mode after the campaign alongside Horde Mode. GEARS 5 on Xbox One X’s in full 4K was breathtakingly stunning, the character models and maps just popped out of the TV screen running at 4K and 60fps across all the game modes. Starting off with the MP and being a little rusty with Gears PvP, picked up the brand new Kait Xbox One Controller which is striking all by itself and jumped into a match with other guests. The cover system has been refined and feels so intuitive now getting in and out of cover as you explore the map hunting down the opposing team. Now I am going to use the classic “distracted by how gorgeous it looks” excuse here, because in the first 5 minutes of playing this mode, I was killed three times by Linda Hamilton, which is not something I ever expected to say when it comes to a GEARS game. Finally getting to see the Terminator: Dark Fate characters of Sarah Connor and the Exo-skeleton T-800 in game was simply awesome. After Linda Hamilton took me down…a few times..I was then blindsided by Emile from HALO: Reach so you can say that my first ten minutes with GEARS 5 was definitely something to remember! 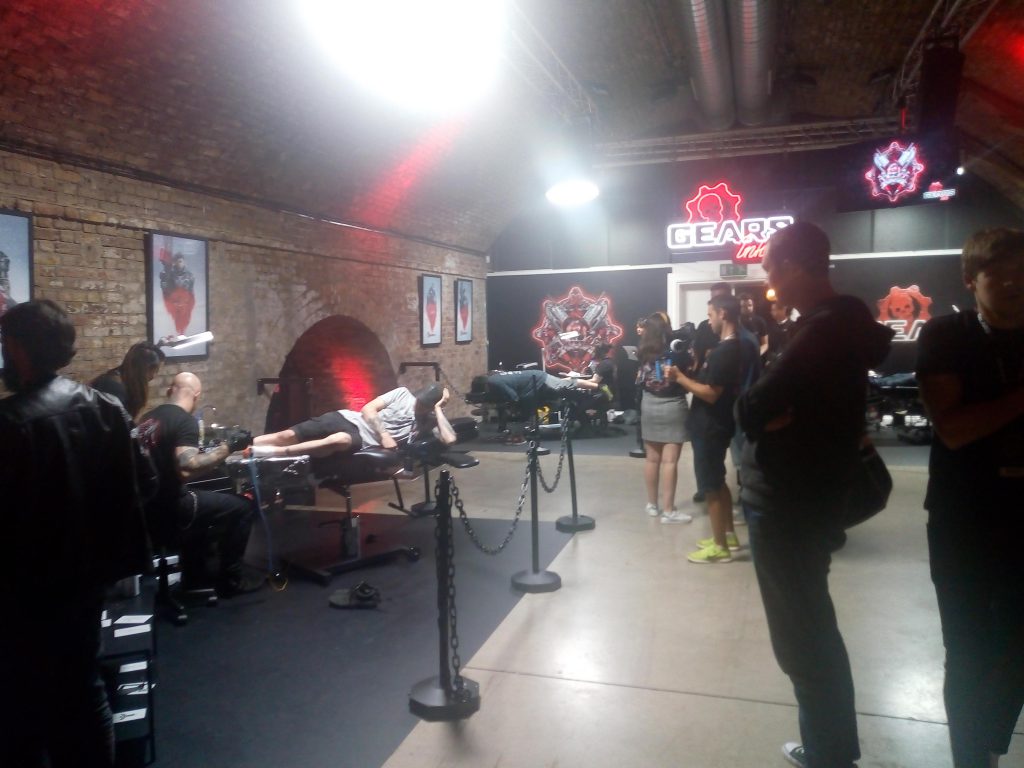 Now of course with the event being called ‘Gears Ink’ you may be forgiven for wondering what the Ink meant in the title, well not only were guests able to get exclusive first hands on time with GEARS 5, but a very lucky chosen few were also able to get a unique Gears inspired tattoo from one of three iconic tattoo artists on the day. Now this was probably the first sign of the incredible luck I was going to experience this day, as when I arrived and was asked if I was here for a tattoo and explained that whilst registering for the event, I was told due to overwhelming demand that I would be on the waiting list but upon arriving at the venue the quite frankly, and you will hear a lot of praise from me to the Xbox UK team on site, there was a opportunity to have one done so I immediately jumped at the chance. The tattoo artist I was fortunate to get was Emma Budonis with her assistant MiaLeo from the ‘Through my Third Eye’ studio based in London.

Each of the three artists came up with their own designs and after being met with a hello and incredible hug from Emma, because she is a self-confessed hugger, I was asked the pre-tattoo checks like checking to make sure I had eaten already and if I was ok to go ahead. Then I was able to look at the choices of design to have but one stuck out more than the others and I simply had to have it. I have a couple of tattoos already but from over ten years ago so I was rather excited to have the tattoo done and Emma and MiaLeo were so brilliant, constantly checking to make sure I was ok throughout the session but also just having a good chat about gaming and tattooing etc. It took just over an hour, which was the allotted time each artist has because they were scheduled to do tattoos all day, right up to 10pm when event closed. After completion I was given an aftercare kit to properly keep the tattoo healed and protected over the next 10 or 14 days that it would take to heal, but I was very happy with how it came out. 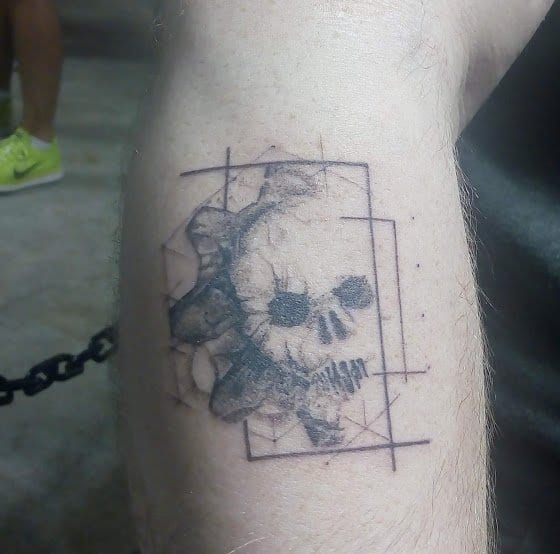 The surprises did not end there for the day, as I carefully rested my arm to let the new tattoo heal, the event had poster signings with the illustrators behind the Gears Ink logo and Bound by Blood designs, Luke Preece and Bill Elis which I sadly missed as I was having my tattoo done. This signing was then followed by the voice actors behind the characters of JD and Del from GEARS 5, Liam McIntyre and Eugene Bryd also signed posters for fans in the afternoon. I also have to say just how friendly and humble these two guys are, they took photos with fans and chatted away about the game, I was even able to talk with them for a good 20 minutes and they even took a photo of my tattoo to send to the developers over at Coalition back in the US.

The afternoon was dedicated to the fans at home unable to come to the event as the LIVE stream began hosted by Simon Miller, who is also a genuinely nice guy who took ten mins out to have a chat with me and complimented me on my recent joining of the “dome club”, with streams of the opening to the GEARS 5 campaign, showcasing the new Escape mode and a streamer vs streamer challenge with members of the Xbox On team, Benny Central and Leah leading the teams. The streams were also offering giveaways throughout the day. It was also a bonus to see just what it takes to put a professional live stream together and believe me when I say that behind the camera focused on the action, there is a massive team of people ensuring it all goes to plan and they run around like you would not believe!

As the afternoon progressed, I chose to head home in order to enjoy the stream as a fan, but just being at the event was an honest privilege and pleasure. So thankful to every member of the Xbox UK team who ran the event but special shout out to Charleyy Hodson and Samuel Bateman who behind the scenes handled the staggering social media for the event as well as the live streams, them and their team who put this event together deserve the highest of high fives for their dedication and vision for Gears Ink.

The event was so popular that they have actually extended it, so today Friday 06/09/19 you can head down to The Bike Shed, Old Street London, and see the event for yourself and enjoy it which I hope you are able to do if you have the chance.

Oh before I end I mentioned how the tattoo was just the start of the many surprises or my incredible luck that I had yesterday, well….when I got home and put the LIVE stream on, they kicked off the biggest giveaway of the day, the chance to win the brand new and exquisite GEARS 5 Limited Edition Xbox One X console….and halfway through playing the opening tutorial of the game as early access kicked off at 9PM UK time that day, my phone went berserk…..and then I was told….I WON THE CONSOLE!!! 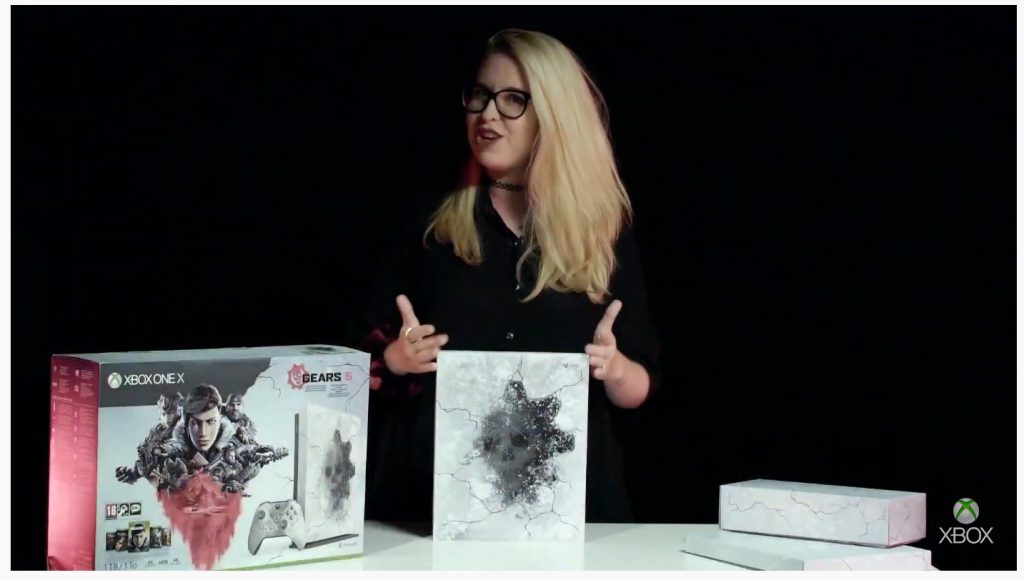