I am a huge fan of the talented team over at Double Fine Productions and with the recent news that they have now joined the Xbox Studios family, the future is certainly bright for this amazing developer team under Tim Schafer. Before they bring their magic to all things Xbox, we have another little gem from the studio to sink our teeth into, released during Gamescom 2019, RAD took me by surprise the first time I saw gameplay and made a beeline to get it on my console and boy, did it continue to surprise me right from the start.

RAD is set some time after world fell victim an apocalyptic event and mankind is barely holding on. The first Apocalyptic event took place in the 1980s and as expected, devastated all live on Earth wiping out most of humankind and reaping havoc on the planet itself. Sometime after that a new civilization rose called the Menders, building colossal structures and scientific machines in the hope of saving the world but then they all vanished. Now the Menders are revered by the remaining humans who are hoping to use the technology they left behind to continue their work to save the world from the new monstrous creatures who now roam the nuclear wastelands. Now you, the player, have been selected as ‘The Chosen One’ to go out into the world to seek out and activate Mender technology.

At first there are a few characters to select for players, with more that can be unlocked but they are really just a visual cosmetic choice as they do not differ in either ability or have a back story that makes any real difference in the world or how you play RAD. Initially the game is rather deceptively basic with the player simply armed with a baseball bat of power for attack and the ability to jump. Very little is also explained to you other than you are tasked with heading out into the wastelands. One of the first things that hits you is just how vibrant the visuals and colour scheme is with a pallet that very much uses the theme of the 1980s with neon greens and pinks showing the effects of the nuclear fallout. The music as well has that tremendous 80s vibe and ‘The Voice’ that offers short little commentary on your gameplay adds a really lovely touch as you explore. 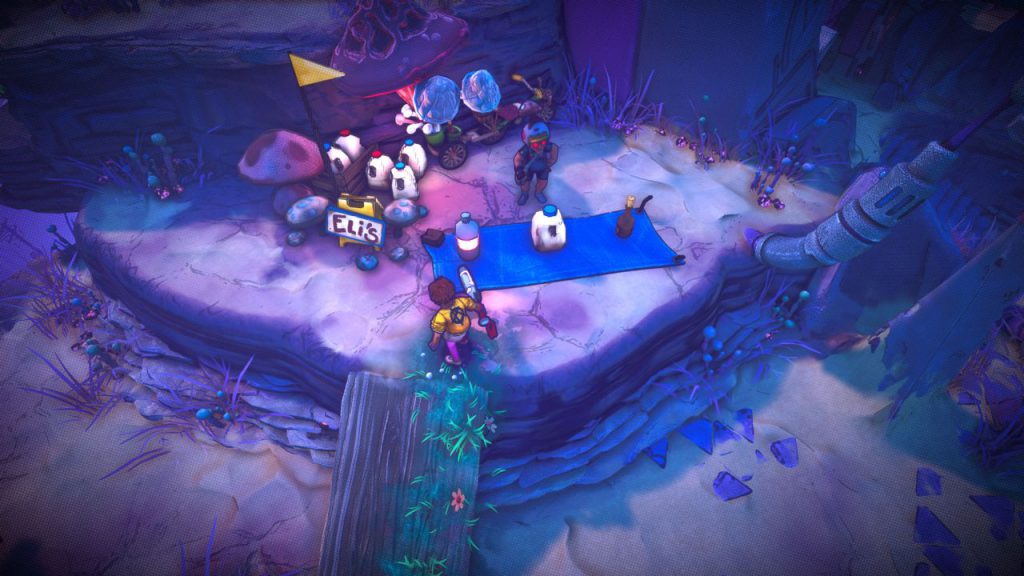 When I say the gameplay is deceptively basic is because at first it does genuinely feel very simplistic. You are in the world and exploring, revealing more of the map the further you explore with the aim of finding a Mender temple and the statues that provide the power needed to open its door. The maps are all procedural generated so you never visit the same map twice and they can range from quite small to larger sized areas to explore. Maps are also filled with different types of creatures, some small, some large and some that can fly but all of which want to fight you. The creatures also have different attacking patterns and attacks which starting off with only 3 basic attacks from swinging your bat to a charge attack and a jump kick attack, can make combat feel very one sided when you first start off on your adventure.

But this is where RAD fully comes to life and changes the gameplay for every creature you kill, you will absorb ‘rads’ into your body. Building up enough rads will cause your body to mutate. Mutations are random so you can never be too sure what you are going to end up having and they can either provide you with a new attacking option such as a projectile attack from a “boomerang” style arm that can be thrown to having a throwable Skull head which acts like a grenade. You can also gain more defensive mutations such as legs that allow you to leave a trail of toxic waste behind which will damage anything that comes into contact with it whilst some mutations will aid you in exploring such as wings to glide and to jump higher. You can have up to three physical mutations at one time and learning to adapt to these new abilities and learning how to use them to aid you in combat or exploration will be key to your success in RAD. You can also gather ‘Endo’ mutations which can boost your ability to resist an element type or give you more health or attack power. Endo mutations are limitless, working like the ‘Badass tokens’ in Borderlands so you can collect as many Endo mutations as you can find. 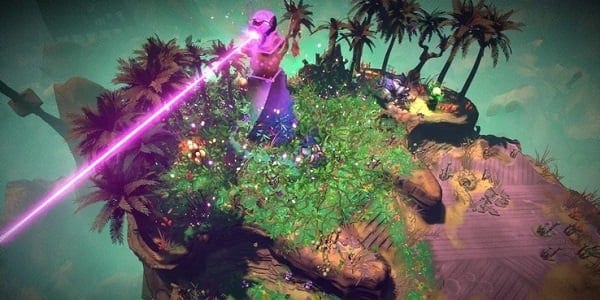 Gaining mutations is an absolute must in RAD and your first mutation will happen as pretty quickly by killing the creatures in the first area you arrive in. Maps will also have a Mender underground tunnel system which is filled with creatures but in a far more confined space but is a great way to farm the rads needed to learn a mutation. These tunnels can also be a quick way to move around the map and a source of Endo mutations so they are worth investigating on your travels. The world also has its own currency in the form of classic cassette tapes collected from defeating creatures and can be used at the various shops either at home base or from the random people you can meet out in the wastelands. Special crates, which require a floppy disc key, scan also be found which will contain helpful items to use such as rad boosters to health potions. There is certainly a lot to do and find as you explore in the world but not everything is straightforward because there is one challenging aspect to RAD which I came to love but can also be very frustrating at the same time…death!

Like other rogue-like games, there is a penalty for failure which comes in the form of your death. When you die, your character will be remade at home base, ready to set off once again but you will lose any and all mutations, items and currency you had acquired in your previous run or ‘life’. You will lose your progression in the world so if like me for example, you had a run/life that lasted for 2 hours but then you suddenly died to a level boss, having to start all over again can be disheartening. The game does offer a band-aid however in that after you complete a level and defeat the main boss, you have the chance to return to home base and can bank any currency you have so if you do need to restart over, you can at least use some saved currency to purchase items from the shops to give you a head start on your next run. Successfully progressing and surviving in the world will also unlock new characters and items in shops for you to buy which remain available even if you fail again. By playing and dying over and over can also lead to new shortcuts being accessible in the world but it also forces players to get better by learning from mistakes. Gaining an understanding of mutations and creatures will help you develop a winning strategy that allows you to survive longer and progress further. 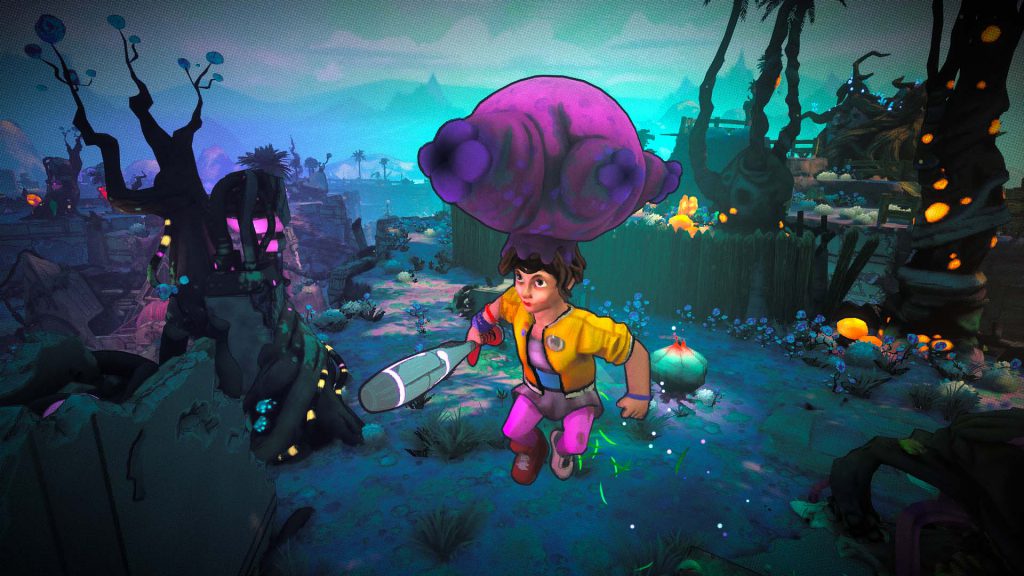 That is where RAD becomes a true gem of a game that whilst the punishment for failing is cruel, at the same time it gives you the incentive and desire to give right back in and try again and because each run is different due to not knowing what mutations you will acquire or creatures and the strive to not fail becomes a true challenge because should you fall, back to the start you go. Like a game of Snakes and Ladders with a good dose of 80s Nostalgia, RAD was a surprising fun experience that kicked my butt more times than I care to admit but gave me a real Rocky Balboa need to jump back in and do better.

RAD offers a true challenge that fans of this genre will find entertaining and though it can be unforgiving at times, it will always give you a fresh chance to meet that challenge. Not to mention it managed to fulfil a dream I never knew I had of becoming a mutated Valley Girl with a baseball bat!