Nintendo seems keen to turn the Nintendo Switch’s eShop into the equivalent of the Steam store. Go on the eShop for the popular handheld/console hybrid and you’ll stumble upon all sorts of games. One such game is called VA-11 HALL-A and it is definitely one of the most bizarre games that anyone is likely to play.

VA-11 HAL-A is more or less a text based game or is it? Players take on the role of bartender Jill as she goes about living her life and working shifts at a very peculiar bar. Before each shift players can make use of the money earned at the bar to buy items and can also use a smartphone and its various applications.

Starting a shift is where the bizarre nature of this game starts to come into play. Jill’s boss who seems to be a professional assassin is the least… unique individual. Each of the customers that drop by for a cocktail or four have their own very unusual quirks. Some are even relaxed enough to go on about the times that they faked orgasms and sex holidays that they went on in great detail. The old Nintendo would certainly find itself blushing if it knew such filth could one day be read in one of its systems. 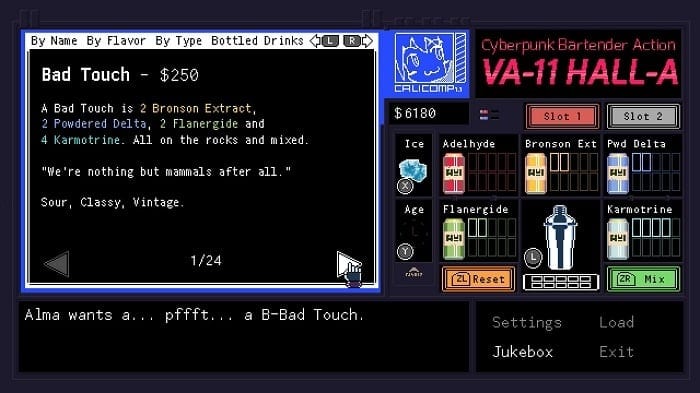 There is a lot of text to read and no way to interact or influence the course of each chat with a customer. Customers will provide feedback on the drinks that they are served, but that’s about it really. If anything, the life of a bartender in the world of this game seems to be a lot similar to that of a priest during confessions.

So if this isn’t an interactive text based game, then what is the incentive for playing it? It’s potentially down to the list of complex cocktails that players can help Jill make for customers. Don’t worry since Jill has a handy notebook with instructions on how to make the cocktails. Each one prepared with care by using some very questionable ingredients with futuristic names. The bar doesn’t get a lot of customers during each shift, so that might explain why the price for each cocktail could probably feed a family for a week or two.

As Jill goes on about her business making cocktails for customers and listening to their outlandish tales, it becomes clear that even in the future, it is still feasible to measure what kind of person someone is by the way that they talk to someone doing bar shift work.

Despite the barrage of text that the game throws at players, it still feels oddly nice to get a pay check at the end of each shift. There’s even compliments from the boss for doing a good job of keeping customers happy and ordering plenty of expensive cocktails. It’s not often that someone gets such nice feedback in the real world, so it’s arguably one of the least realistic aspects of bartending in the world of this game.

If anything, sometimes VA-11 HALL-A can get too graphic and detailed about sensitive issues. It’s at times like this where it becomes clear just how difficult it can be to work in a job where it’s impossible to ignore the worst that humanity can throw at you. But at least each pay check makes it possible to purchase material items and such. 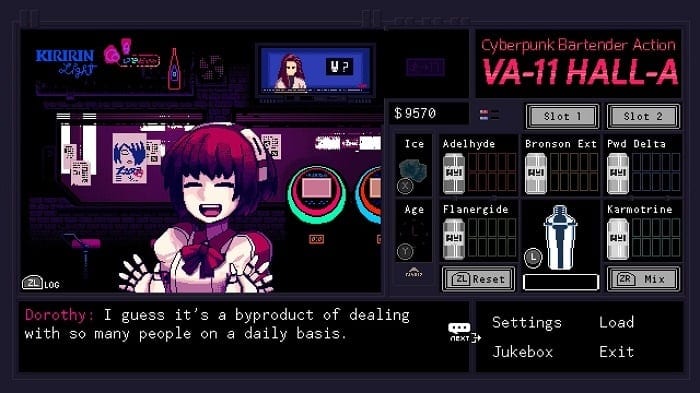 Given the emphasis on text, it’s reassuring to see that the game has an excellent grasp of the English language. This is certainly no amateur attempt at a text based game and it helps to keep players engaged.

VA-11 HALL-A is certainly a curious experiment that will no doubt have found its niche audience by now. It’s reassuring that it isn’t a failure, but it’s also not the kind of game that will appeal to the target audience typically associated with Nintendo hardware.

I'll be the first to admit that my racing skills need some improvement. I spent the first couple laps bouncing off walls and rubbing into the sides of my fellow competitors. In nearly every instance, I came dead last. Then, I began to get into my groove, and started to rack up the wins. Rise: Race The Future shines in its simplicity.

Front Mission was a series that was pretty popular in Japan and did ok in other territories. Left Alive is a third person spin off from the Front Mission series, it's not a series I'm particularly familiar with so I'm hoping Left Alive will give me the encouragement to try it out.
Read more
Gaming

Many of the kids from my generation share the same experiences when it comes to trains.
Read more
Gaming

Introduction Dreadlocks Limited dips into the Cyberpunk realm with an...
Read more
Gaming