It’s rare to see a game like Rad Rodgers and more so on a Nintendo console because of its rather questionable humour. Just how well does Rad Rodgers: Radical Edition fit in on the Nintendo Switch?

In Rad Rodgers, the main character is a teenager called Rad who is really into video-games, like most other teenagers his age. Unlike everyone else though, he finds himself suddenly sucked into one of his games and must now survive challenging levels with the help of a rather aggressive console shaped being called Dusty.

As the duo make their way through the many levels of the Overworld, it becomes clear that this is no walk in the park. Each level comes with its own unique challenges that might make some players curse as much as some of the characters. It’s truly a sight to behold to hear characters go on about butt plugs and unclean rectums on a Nintendo console. It’s clear that Rad Rodgers is not one for the faint of heart for various reasons.

The land that the story takes place in is diverse enough to include different elements in each level. This makes it far more interesting to explore the surprisingly expansive levels. Level design is one of the game’s strengths and it makes efficient use of each area to ensure that even coming across the same section upon finding ways to progress into new sections doesn’t get dull. In a way, it is reminiscent of the Metroid titles and not only because of its use of side scrolling levels, but also how new sections of a level become available. 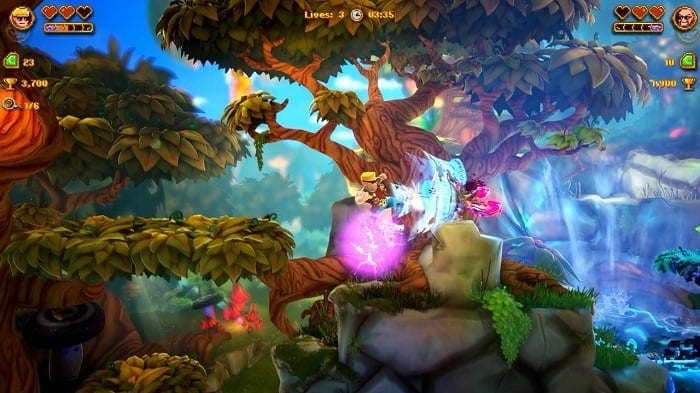 Each of the characters has an impressive amount of powers at their disposal. Whilst Rad can make use of many weapons, Dusty is able to take the player into an alternate dimension to clear puzzles. These puzzles are a welcome addition since they make excellent use of Dusty’s more unique abilities to present players with simple and yet entertaining puzzles.

There are a few more characters that can be unlocked to make use of to play each of the levels and they come with their own unique powers. Let’s just say that some interesting and familiar individuals are included.

Usually, the primary objective of the level is to collect four pieces of a circle item to be able to finish it and unlock another one. However, there are also fun mini-game style levels for players to try. One such mini-game sees players having to remember the order that enemies are highlighted and then shooting them in that order. Each of the normal levels comes with its own leader-board and many collectibles to be found as well. It’s great to see so much content that is not only relevant to the type of game that it is, but that players will actually want to engage with.

Although the game’s colourful nature does make for an interesting adventure, it can also make it difficult to spot traps and any other parts of the environment that will hurt the characters. For example, it’s only apparent that some plant like purple spikes in a level will result in loss of health upon landing on them. The game could have benefited from making it easier to know what can hurt the characters. More so when it can already be quite challenging to complete some of the levels. 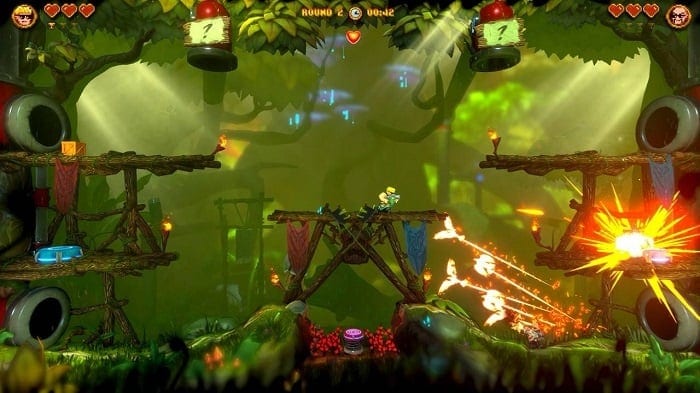 It can also come across as a little rough around the edges. It was easy to come across minor issues that are solved in rather on the fly ways and at least one progression blocker that required quitting the level during a normal play-through. The camera also doesn’t always follow the characters which can be problematic. These types of issues were very rare, but they still somewhat brought down the quality of what is otherwise a pretty solid side scrolling platform title.

There are a couple of bosses for the characters to take on and although they are tough opponents, they don’t always feel like fair fights. The way that each boss needs to be taken down can feel vague and makes it very difficult to figure it out.

There is the possibility for two players to play through levels, but the real multiplayer aspect of the game comes in the form of the battle mode. In here players can go up against each other in a death-match arena until only one is left standing during each round. A ruthless and expected approach for a game that isn’t shy of being crude.

Rad Rodgers: Radical Edition isn’t exactly going to change the side scrolling platform genre, but at least it has the ability to entertain and sometimes that is enough.