As a comic book fanboy, I just love crossovers where it be in the pages of a comic book or graphic novel, TV thanks to the Arrowverse or on the big screen. When it was revealed back in February 2019 that WB Animation was working on the adaptation of the 2015 Comic Book crossover of Batman and Teenage Mutant Ninja Turtles, I was not sure what to expect having never read that original comic run and I just could not see how these two worlds would come together. But how wrong was I as this animated film is not only tremendous fun, but it is easily one of the best standalone DC films they have produced yet.

Now being an adaptation of the comic book series, the writers have very cleverly stripped down the core elements of the story in order to make it more focused on the essential characters of Batman with Robin and Batgirl and the Turtles. Right away the story does away with trying to overthink the explanation of why the world of the Turtles has suddenly appeared in DC’s Gotham City, they are simply there and instead of how they arrived, the story gets right into why the heroes in a half shell are there.

The reason is that someone is running around Gotham stealing very high-tech equipment from corporations which the Turtles are investigating after they have followed Shredder and the Foot Clan to Gotham. They believe that Shredder has teamed with someone and at first, they mistakenly believe it to be Batman but soon it is revealed to be none other than Ras Ah Ghul and his League of Assassins. They have formed a mutual partnership as Ras Ah Ghul wants the ‘Ooze Mutagen’ that Shredder can provide and in return Shredder will be granted access to the Lazarus Pits, the source of Ras’s immortality. 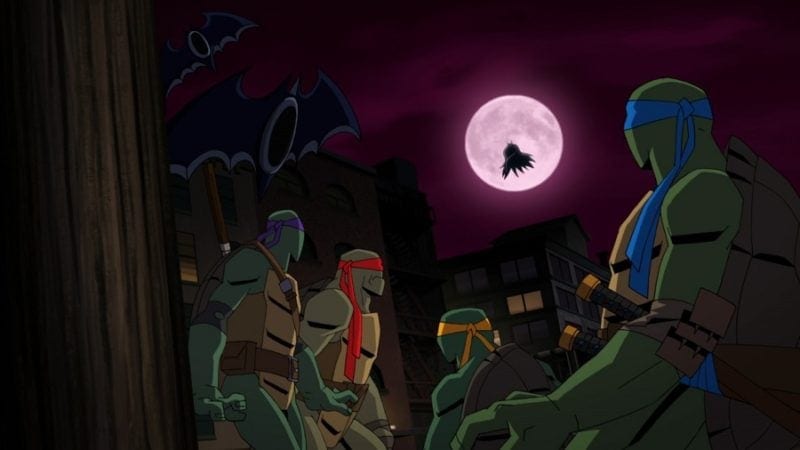 Visually I really love how it looks just like an animated TV would look starring the Turtles on Nikolodeon, everything has a vibrant look to them compared to the art of the original comic book series which was quite dark and gritty, so by keeping it relatively light and colourful, it really leaps off the screen. I love that we get to see the current comic book style for Batgirl and the Robin is Damien Wayne. The Turtles themselves have their own stylings to make each one unique so Raphael is bigger and more brute looking than the skinny Donatello, Leonardo looks very stoic and Michelangelo is well…he really is just Mikey. The way they have drawn all the characters quite frankly is just something special such as when Batman’s most iconic villains are introduced midway, they just look so amazing.

The action for me is where this animated film really steps up from anything WB Animation has produced in recent years with some of the best fight animations I have seen in a very long time. The level of detail in every character’s movements and fighting styles is crazy, but then almost everyone is a trained Ninja. This release has an amazing bonus feature which explains how they pulled it off by focusing on basing every fight on actual martial arts instead of just basic punching and hitting, you can really see how the fights use the environments they are in, the weapons they have and just a real decision to make every battle a real believable fight. One of the best examples of this is the initial encounter between Batman and the Turtles, both sides very wary of the other and not sure of their intentions and watching Batman taking on each Turtle in a completely different way lays the foundations for all the battles to come. Battles that I never knew I wanted to see until this film such as Batman Vs Shredder and the Turtles Vs Robin.

What makes it all work so beautifully is that this story so cleverly pairs up the characters in ways that at first the audience may not automatically expect but as soon as they do, it all clicks and becomes obvious. From Raphael and Damien Wayne to Leonardo and Batman and a really lovely connection between Batgirl and Donatello. Throughout the film these pairings work so well together providing some tremendously funny moments that feel natural which is a credit to the amazing writing in this story. I laughed so much and I mean full on rib cage hurting hard style of laughing. The dialogue is so well written and performed by the excellent voice cast which boasts some very familiar voices such as Tara Strong playing her iconic roles of Harley Quinn and Poison Ivy whilst Troy Baker, who gamers will know voiced Batman and Bruce Wayne in the Telltale The Batman games, is just so good at delivering the calm and steady focused Batman as he is showcasing the crazy as hell Joker. 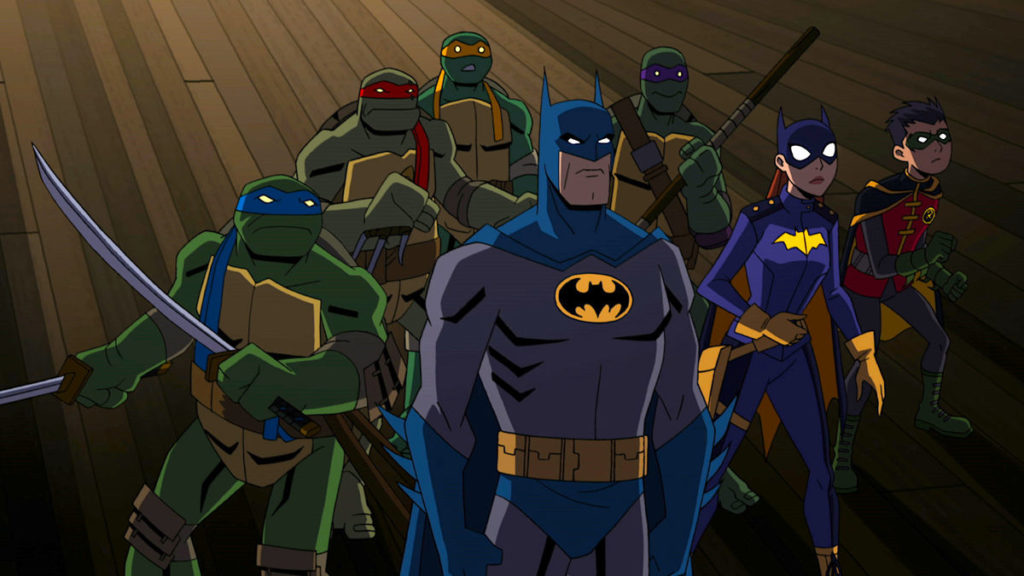 To say that this is the most enjoyable animated film since I watched ‘Into the Spider-Verse’ in the cinema is not an exaggeration. I was not sure what to expect going into this but it surprised me in so many ways from being just as joyful an experience as possible, to appreciating and admiring the attention to detail in the animation and the brilliant writing of the story brought to life by an exceptional voice cast. This won me over so much that I have ordered the original comic book series so I can have the original source material as well as this film.

As a standalone adventure, Batman Vs TMNT manages to embrace everything that is so amazing about the very two different worlds of Batman and TMNT but is able to bring them together so smoothly you would think they actually existed in the same universe anyway. The story gives every character a moment to shine and you can actually see how bringing together the heroes actually changes each side with Batman learning to work and trust his own team far more by the end and the Turtles learning to understand and respect being more focused and confident in their own skills.

I fully recommend this to all fans of WB animation and especially for Batman and TMNT fans. There are only two bonus features with one focused on breaking down all the fights in the story as mentioned above and one that looks at how they managed to adapt the original comic books into this animated film. It also has the same Batman: Hush preview as seen in Justice League Vs The Fatal Five Blu-ray release but the film itself really is the reason that this is a must see and must own in your collection release.

Batman Vs Teenage Mutant Ninja Turtles is available to stream digitally from May 14th and will be available to purchase on Blu-ray and DVD from June 3rd 2019.

Here is our review of the latest Livescribe Smartpen, the Symphony.
Read more
Movies & TV

In what is likely to become a...
Read more
Movies & TV

I am really enjoying the diversity of...
Read more