I am always a fan of developer teams building up to a release date of their game by posting developer videos that show how the game is coming along as well as sneak peaks at what to expect. Those videos showed just how passionate Asobo Studio are about their debut game and you can see how it translates into the game with some amazing emotive storytelling and world building I have seen so far in 2019 in ‘A Plague Tale: Innocence’. Which is certainly not what I was expecting when first firing the game up and seeing a main menu screen covered in thousands of rats!

Seeing those thousands of rats on the main menu really sets the tone of A Plague Tale: Innocence with the story set in Medieval France as a country at war with England but also at the very beginning of the Black Death epidemic as well. This is a country in crisis and turmoil which is why the opening chapter is so striking. The story opens with Amicia, daughter of a French Lord, accompanying him through the grounds of their estate on a lovely and peaceful day with the sun shining and countryside looking beautiful. The player learns that Amicia is unhappy that she spends so little time with her father due to his obligations to manage his lands as well as being very distant to her mother who is looking after her younger brother Hugo is has a mysterious illness. With very little effort and in a very short amount of time, the player is able to really connect with Amicia as someone who feels quite alone despite being the daughter of a Lord.

Her father then sends her to give a message to her mother that he wants to speak with her, and take Amicia back to her family home where she is welcomed by all the servants who themselves are all hard at work doing their daily tasks. Everything is rather peaceful and lovely and seemingly away from the troubles in the country. I loved how the pace of this opening, which also serves as the tutorial to the game, manages to immerse me right away in the life of Amicia which is vital as her entire world is about to collapse. The Inquisition arrives, charged with finding those who may be afflicted with Plague and to essentially stop the spread by any means necessary but their mission here is different, they are looking for someone, Amicia’s Mother and brother Hugo. As Amicia runs to her brother’s room, we see the soldiers of the inquisition interrogating the same staff that only minutes before were just going about their daily routines and yet now they are being beaten, questioned and then killed by these strange soldiers.

Soon it becomes a race for Amicia to take Hugo and escape the home, in doing so Amicia witnesses the death of her Father, fighting to protect his family and killed by the head of the Inquisition Force Lord, a brutal and uncompromising force of nature who will accomplish his orders by any means necessary. The opening chapters not only establish Amicia as the hero but at the same time makes sure that the player and the audience is fully aware that this guy represents the evil villain of the story. The story telling is just so powerful and beautifully paced in this opening that by the time Amicia and Hugo have managed to escape, as a player you have genuine fear for them going into the world alone, and hunted and not knowing why. 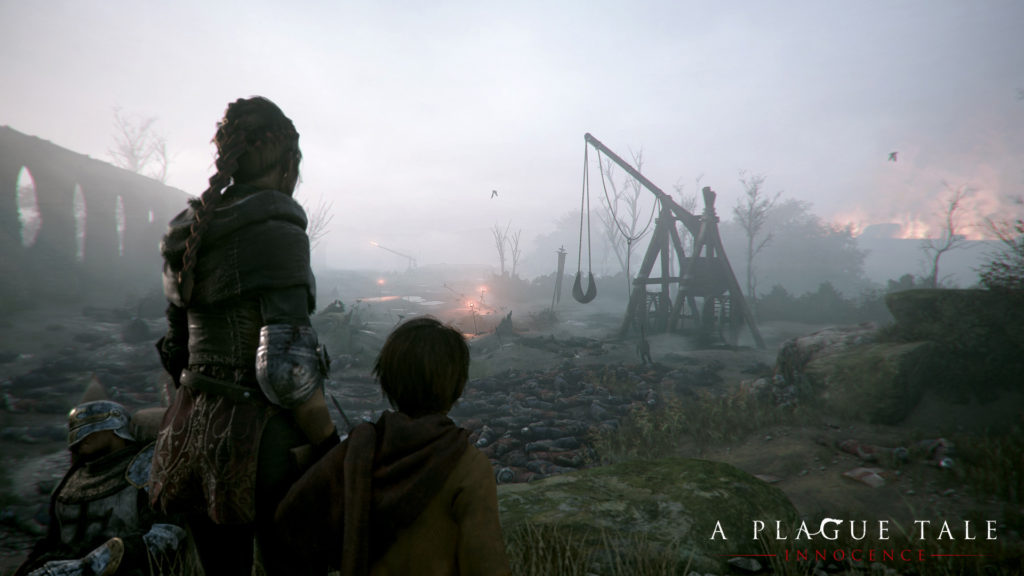 The story itself is broken down into chapters which really deliver the story for the player in just the right pace for storytelling as it enables for true moments along the way for Amicia and Hugo. The chapters never feel too long or too short, delivering the right amount of impact for each level of this dark terrible world. It also allows for some clever rest points as cutscenes take over to tell the story with some beautiful animation and visuals that are sublime at helping to tell the story just as much as the dialogue between characters. As beautiful as it can be it also does not shy away from recreating what a city that has succumb to plague would look like in medieval time and it is very bleak to see. Rotting bodies all covered in flies with homes in villages marked with a giant white X to serve as a warning to others that the Black Death has taken them is just so visually striking on screen after you first spend time with Amicia at her home in the bright and peaceful lands she calls her family home. It is often brave to use such horrific and dark real historical events in a video game to tell a story but here it is so vital to the how this story needs to be told.

Then you have the rats, the thousands of red eyed rats that swarm like a water can flood an area. They are creepy and sinister and they just continue to get under your skin the more they appear on screen with incredible audio effects that especially through a good headset just honestly got to me and added so much atmosphere. I also love how the voice cast absolutely nailed their performances when it came to these critters as there was real tension and fear in their dialogue exchanges when having to deal or avoid the rats, making them a real danger to the characters in the gameplay moments of the game.

That gameplay really comes in the form of stealth with some optional and at other times nonoptional combat. The Stealth is a clever one as for most of the game, Amicia is tied to Hugo so is constantly having to look after him in every situation they encounter. This is accomplished by the need to always hold the hand of Hugo when moving and particularly when having to avoid enemy encounters. This shapes how you handle the stealth sections as you always have the feeling that you as the player are protecting Hugo more then you are protecting Amicia. You are able to command Hugo to wait, and later when other characters join to work with Amicia, but with Hugo if you go too far away from him, he acts like any scared little five year old boy and he will panic and start to call for Amicia which can raise the alarm which means keeping him close is usually the only way to complete a section.

The game also has combat in the form of Amicia’s skill with a sling shot, which can be used to take out enemies. This can feel clumsy at times but thankfully there is a crafting and upgrade system to improve her skills such as making the slingshot stronger so it takes less time to aim at the target and improving the time it takes to throw another shot. I really liked how Alchemy plays a role in that as you progress through the story, Amicia learns or is taught how to craft new ammo types to use such as shots that can start or light fires which is handy when dealing with the rats but also ammo that can put fires out, which can be used strategically later in the game. Upgrades and is capable through collecting materials which are conveniently lying about all over the place and via a workshop table, upgrades can be made to Amicia’s equipment such as improving her slingshot but also the ammo pouch and material pouch. I really enjoyed this aspect to the game and it certainly did help in preparing for the later chapters. 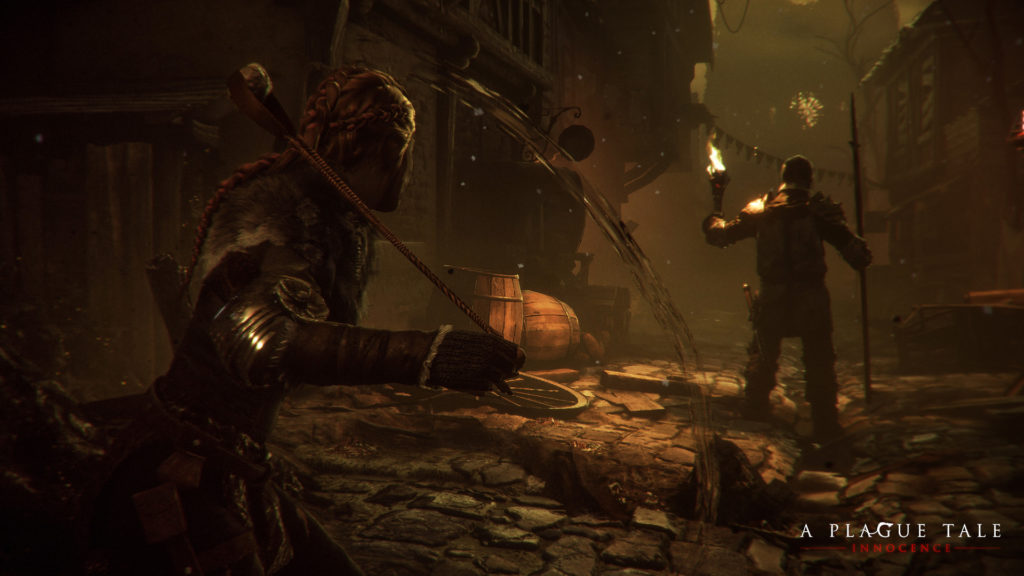 Where this game does fall down for me is just how unforgiving of mistakes it can be, something what in the final chapters of the story can lead to frustration more than enjoyment, with one sequence in particular just yanking me right out of the experience in a bizarre and unwelcome way but will come to that a bit further on. Being seen will often lead to being caught and killed and whilst the game does have a very good checkpoint system as though it knows when a certain section could prove tricky, I did find that there were moments that just seemed unfair such as guards being alerted and staying alerted even though I had successfully broken line of sight and hid. This caused me to actually restart at checkpoints quite a few times just to reset a sequence in order to have a fair crack at it.

The moment that frustrated me the most came in the form of the final boss battle, and did so for many reasons. This game is full of powerful story telling and allowing the player to make it through the game without being too annoying with puzzles that are very straight forward and using a trial and error approach so the player can lean from mistakes. But this boss battle completely broke the immersion for me as it simply broke all the rules of the world, I had spent hours learning to use and follow. The slightest mistake and I was forced to restart the whole fight and even when the battle just became more stupid then challenging, all I could see was that someone along the way suddenly felt that the game needed a big fight despite the combat aspect really being kept to very minimum moments along the way, some of which are completely optional and stealth can be used instead of taking guards out. This battle annoyed the hell out of me and instantly reminded me of the final Joker battle in Arkham Asylum where Rocksteady admitted they just ran out of time to do something really big to finish on and for this game, this battle just felt forced instead of something to battle, defeat and then celebrate to close the game and almost soured my enjoyment of this game. 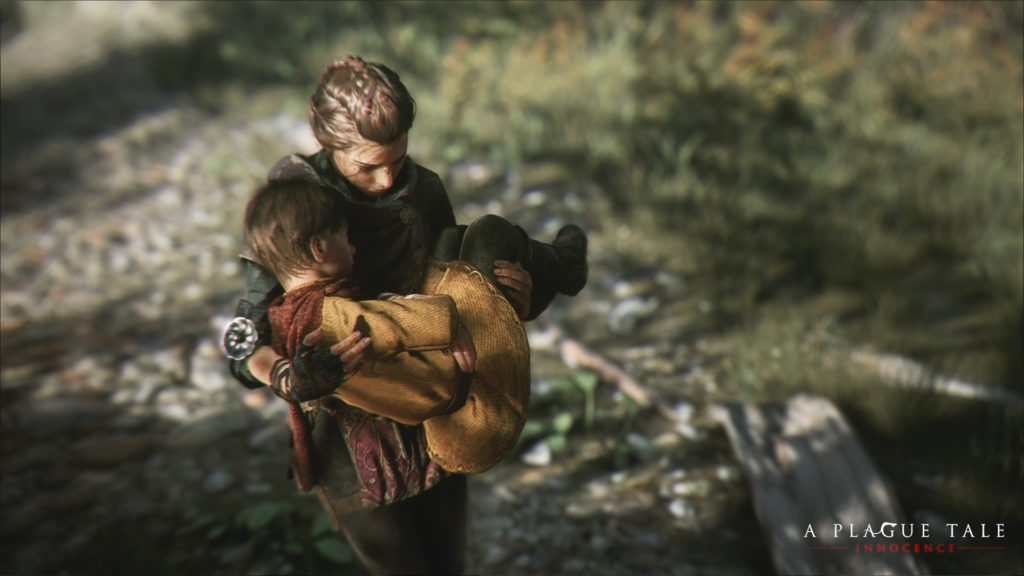 This is a game that only surprised me on every level and bar one silly boss fight that tainted the experience a little, this is a game and a story that will stick with you long after the credits end. It has so many themes such as family devotion, friendship, sacrifice and how they can be beacons of light in a dark world. With the setting and backdrop of the Black Death, you see how horrible it must have been to have no hope at all of either surviving the plague itself or the fear it created in people who would go to any extreme in order to eradicate it. Amicia is such a wonderful character who has so much pressure and responsibility forced upon her and really grows into a strong and capable woman because of what is at first expected from her as Hugo’s big sister to ultimately wanting to protect her family no matter what.

I came to genuinely care about Hugo and had the instinct to make sure he was nearby even when the game did not call for me to do so, that is how well the game pulled me into the story and I hope it will do for others playing this. A Plague Tale: Innocence has instantly become a highlight and GOTY contender for 2019, the visuals, musical score, voice acting and cast all come together so beautifully that even with that outright stupidly designed final boss encounter that sullied it a little for me, this is a story I really hope gets the recognition it deserves. It has some faults but otherwise this is a story and gaming experience that deserves to be played.