The hype for all things Borderlands is incredible right now following the announcement that Borderlands 3 will be releasing this September. It has fans old and new really looking forward to it but for fans like me, who have played the series since it first launched back in 2009, it immediately made me want to revisit the original loot shooter to relive how it all began. So how handy was it that in the same event that announced Borderlands 3, Gearbox also revealed that Borderlands GOTY had been remastered for current consoles and PC.

The moment the intro plays for Borderlands I was instantly transported into its world once more, even though I have played all the games since including the Telltale ‘Tales from the Borderlands’ which I very much recommend you playing, there is still something magical about where it all began that still makes me smile. Now Of course one of the now traditional aspects to any Borderlands game is that kick ass opening musical track which began with “Aint no rest for the wicked” for the first game and remains fondly on my Spotify Gaming playlist.

Not to mention remembering the cell shaded comic book visual art style to the game which even now after four games is still striking and now very much refined with this new enhanced version of the original Game of the Year Edition, which kind of surprised me as cell shading usually just looks like cell shading to me, so the fact I can see how refined it is shows how much detail and precision has gone into making this enhanced version look as good as the previous remasters in the ‘Handsome Jack Collection’ and the animation is smooth as silk which is important for an FPS. 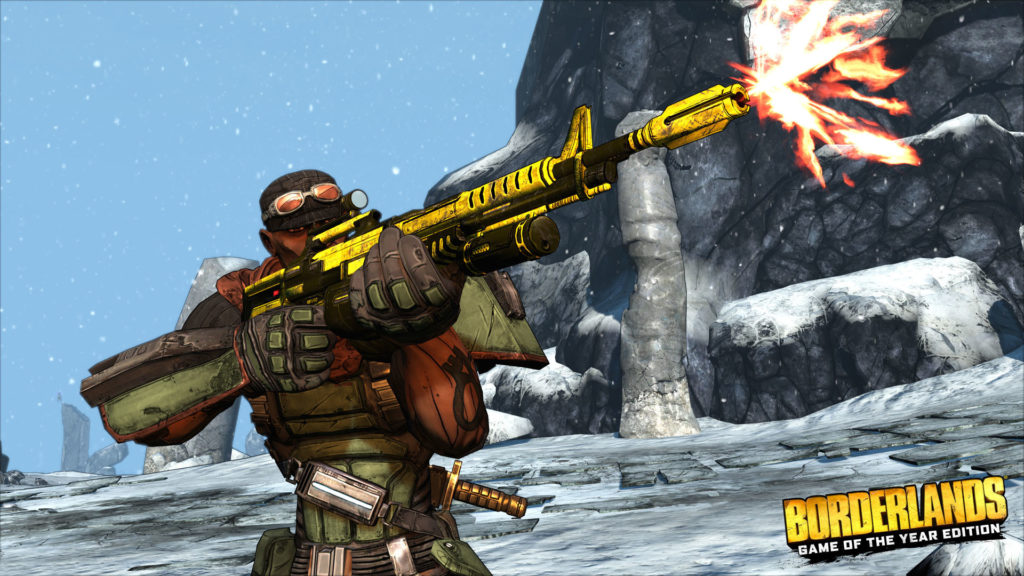 For those who may not know the story of Borderlands, the universe is one full of mega corporation all battling it out to be number one. The Atlas Corporation, is the first to discover a mysterious alien vault full of weapons of advanced technology which instantly gives them a huge advantage over their rivals and so begins their search to find more which leads them to the planet Pandora. Atlas set up shop on Pandora hoping to find more alien vaults amongst the strange alien ruins on the planet but they failed to take into account the monstrous wildlife and soon after being unable to find anymore vaults, abandon the planet. Being the competitive and sneaky Corporation that they are, DAHL then occupies the planet, but instead of focusing on alien technology finds, they focus on harvesting the rich minerals on the planet by bringing in prisoners to do all the labour but they also have a team of xenoarchaeoligists searching for alien vaults.

However the vicious wildlife has taken out all but one of the team, but the lead researcher, Patricia Tannis does make a discovery, but her communication is intercepted by Altas, who being a little annoyed by the fact they missed this discovery, send in their Crimson Lancer attack force to retake Pandora which forces DAHL to abandon it by only taking the wealthy off world. Pandora is now left with all the prisoner labour force now splitting up into their own gangs, the Crimson Lancers who have kidnapped Patricia Tannis and set up military points across Pandora and a population suffering under the hardship of the world and its wildlife. In other words, Pandora is not a place to take a holiday!

But Pandora has become  a point of interest for the baddest of the badasses of mercenaries known as Vault Hunters, willing to do whatever it takes to find the alien Vault on Pandora and claim its treasures for themselves which is where the player comes in, as four new Vault Hunters arrive on Pandora ready to gear up and find the secrets of Pandora and prepared to take out anyone who stands in their way. Each playable character has a particular skill or class starting with the generic Soldier class in Roland, a former Crimson Lancer now working for himself, Mordecai the hunter with his pet bird Bloodwing, Lilith the Siren, who has mystical powers to use and my personal favourite in Brick…the berserker class and mammoth sized man who can enter a rage and just punch the crap out of anything and everything around him. This guy you may also recognise from the Borderlands 3 trailer breaking out in a sexy saxophone solo! 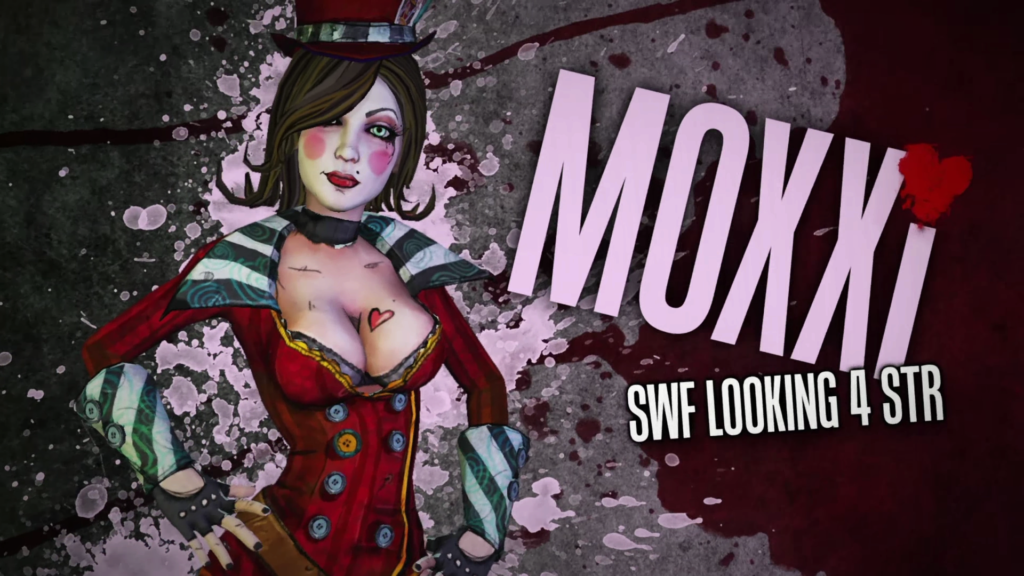 The reason why Borderlands was so incredible as a shooter and naturally evolved into bigger and better games is that Gearbox managed to blend together so many different genres into what I still consider to be the first successful ‘Looter Shooter’. It can be played completely solo if you wish or teaming up with friends online and now even with randoms via matchmaking. The FPS aspect is very satisfying and one of the most iconic things about the series is the sheer volume of guns and weapons you will pick up along the way is quite frankly ridiculous. From machine pistols to revolvers and assault rifles to shotguns, sniper rifles and rocket launches and all the grenades in between, it is truly nuts just how many guns are thrown at you as you play through. Weapons can come with elemental buffs with shock, corrosive, explosive and fire augments which can be effective against particular enemy types you encounter.

As you progress through and earn XP you can spend points on your chosen character’s skill tree which brings an RPG element into the game that also works incredibly well as you continue to grow your character and make them stronger and unlocking new abilities to enhance your core skills. What I also enjoyed and still do is the balance to keep enemies a challenge for players throughout so enemies will always scale to your player level and boss fights always fun. You can also run multiple character save files too so the ability to try out each of the main heroes is there at any time and just like I did first time around and with the sequels, I would have one character to take through the story all solo but mix it up by playing as a different character when teaming up with friends online.

The story itself is very well written as the quest to find the Vault is supplemented by numerous side quests to take on in the different areas across the world, all of which connected by a handy fast travel system which can speed up the time to get to each region to complete the side quests and return to safe areas. The variety in the characters you will meet to either give you main campaign story missions or to serve as provides or side activities is as fresh now as it was back on original release and you can really see why this game launched the series to such success, it is the foundation by which all of the series continues to grow and just why there is so much hype going into September and the release of long awaited Borderlands 3. 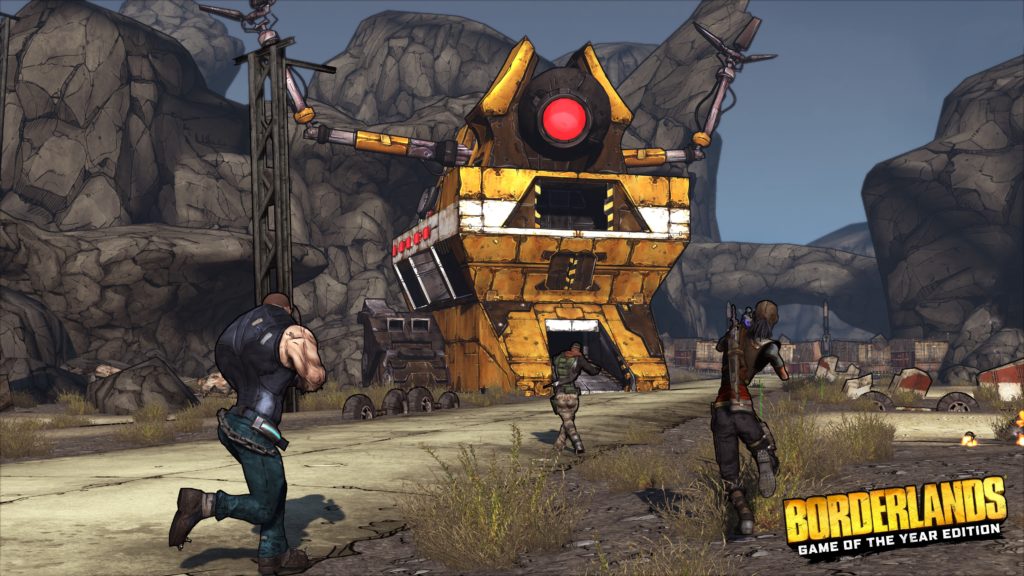 That said, I did find with this enhanced version of the original GOTY Edition, that it certainly could have benefited from some extra refinement as there are certainly some niggles in the game such as hit detection with hip fire can be very annoyingly hit and miss and vehicle use can also feel very clumsy at times. Other issues I found were dialogue audio with some of the NPC characters simply failed to play at all which was a bit of a downer. But otherwise this is a very solid edition which certainly benefits from the amazing DLC expansions to the game such my personal favourites The Secret Armory of General Knoxx and Claptrap’s New Robot Revolution standing out the most but all four DLC packs are included making this the best entry point for the series for newcomers wondering what all the fuss is about.

Returning to the first Borderlands game has been great fun and with this release, the entire series is now fully playable on current generation consoles giving fans all the Borderlands chaos and mayhem they could possibly want heading into Borderlands 3. This remains one of my go to gaming series with friends and it especially still holds up today against the looter shooters like Destiny and The Division which all came out after the original release of Borderlands. This is a great entry point for players and a superb nostalgia trip to revisit where it all began, and whilst the sheer number of guns available has become more of a meme rather than a selling point for the series, incredible gameplay, well designed characters and a fantastic voice cast to bring them to life all come together once again to highlight how great Borderlands is.