Mixcder has announced the launch of the latest headphone in the range, the E9. The next generation headphones feature the latest advancement in ANC technology to deliver superior noise-cancelling performance and audio quality. The foldable headphones have the premium, soft foam pads expected of Mixcder but now with upgraded technological advancement and improved sound. The Mixcder E9 headphones are available now for £59.99/$69.99 from Amazon UK and Amazon.com.

With the launch of the E9, Mixcder has increased the length of time music can be enjoyed thanks to its 30-hour battery promise without using ANC and 24 hours with. Hybrid ANC technology uses an active noise cancellation system that works in a wider frequency range in the low to midrange frequencies than most ANC designs and provides an improved degree of noise cancellation. The ANC continues to work when using the included audio cable and can play for around 40 hours. If ANC is switched off, the headphones require no battery and can be used continuously.

The E9 also delivers improved isolation for better noise cancellation outside the active range. When an incoming noise is detected by the headphones, a digital signal processor (DSP) analyses the sound waves and creates inverse waves to cancel out the ambient sound. Simple to activate, users simply switch on the ANC button on the left ear pad to shut out from the world and relax with their music or film without being disrupted by noisy neighbours on a train or plane. 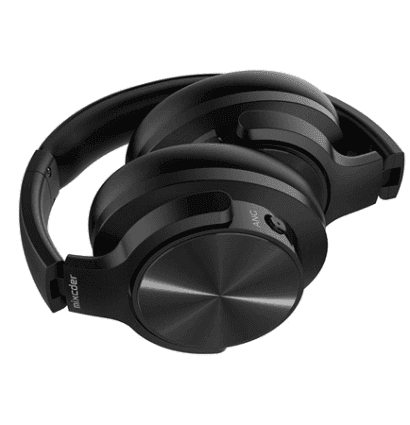 Ideal for frequent flyers, the new aeroplane adaptor function allows the user to immerse themselves in music without the disturbance and noise levels experienced on a plane. Also, for ease of use, the buttons have been made bigger than on the E8 to manage volume, change music and the microphone allows for wireless control and hands-free phone calls.

Lighter than its predecessors, weighing in at just 255g, the E9 has been designed to accompany users wherever they go. The ear cups fold and rotate, making them perfect for travel and commuting as the headphones can be flattened down for easy packing within the included durable carry case. The soft foam and protein leather ensure a comfortable experience whenever users want to drown out the soundtrack of modern life.

The E9 is equipped with 40mm drivers for a powerful, wideband frequency response from 20Hz-20,000Hz with impactful bass, a rich and detailed midrange and clear, extended treble. The CSR Bluetooth and drivers balance sound perfect, especially in low frequency offering a crisp sound at up to 94 decibels. It delivers real clarity of sound, particularly with low frequency and deep bass which is powerful and punchy. E9 listeners are able to immerse themselves in their music or film with no disruption from external noise and enjoy every nuance of their favourite song.

Chris Hare
A True Tech Geek at Heart, I Started my life of being a Tech Geek at the age of 5 with the BBC Micro. Went on through most of Nintendo stuff and now a Xbox and PlayStation fan. I also leaked the information about the leaked Hotmail passwords story from October 2009 that went World Wide. I Started writing tech articles at the beginning of 2011, most of my articles are about Android phones and Xbox One and PlayStation 4 and other gaming news. When Chris has free time its with the family.
Previous articleReview: Devil May Cry 5
Next articleMoshi has announced Samsung Galaxy S10 Accessories

In what is likely to become a...
Read more