The side scrolling beat em up genre has a very special place in my heart going back right to my early gaming years. I am talking games like Double Dragon, Bad Dudes vs Dragon Ninja, Golden Axe, Final Fight and Streets of Rage. Sadly it is a genre that has been lost over the years and left behind but now a game both inspired and serving as a homage to this genre is back to kick some butt and make some noise. Raging Justice is here.

When I first saw a trailer for this game I was immediately transported back to my days playing Final Fight at the arcade and then Streets of Rage on my Mega Drive. The level of nostalgia alone from the trailer only carried on even more once in the game itself from the visuals to the fighting. Everything about Raging Justice is pretty much a celebration of those iconic titles that came before.

As most side scrolling beat em ups have, Raging Justice is set in a city overrun with crime and held hostage by a mysterious crime overlord. To take the city back, three mavericks step up to bring hard justice down on the scum and villainy of the city as Nikki Rage, Rick Justice and Ashley King do whatever it takes to bring them down. Already this game creates a world with characters and enemies so familiar to what fans of the genre will instantly recognise and that continues throughout the gameplay experience. 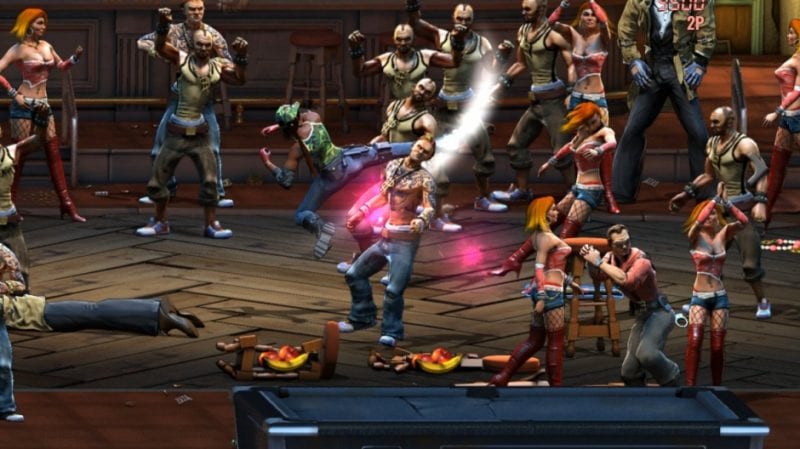 More than any other iconic games of the past, for me Raging Justice really focuses down on two of them being the titles of Final Fight and Streets of Rage. The premise is very simple as our heroes fight and kick butt through short levels as they aim to take down the boss characters to work their way to the big bad crime lord in charge of it all. As they move through levels they will be attacked by gangs of enemies who will appear on screen from the left and right sides with progress paused until all enemies are taken out. Enemies come in various types and to give the game that modern twist on traditional side scrollers, they are far tougher as generic enemies even on the easiest of difficulty settings which the game simply refers to as Wimp difficulty.

Weapons can be found and picked up from defeating enemies and because of the new animation and art style that Raging Justice has, it does feel more visceral than any previous games in the genre. It can be very satisfying to use a pipe or base ball bat to smack multiple enemies against a wall but also a little unsettling to hear the whelp of a defeated attack dog. The art style has an almost Claymation style to it which makes everything just pop out of the screen all the more which is then enhanced by the brutality of the audio effects as fists hit faces constantly and weapons break bones. Within ten minutes I had the same feeling as I had playing Final Fight on the arcade as a kid, so strong is the nostalgia in Raging Justice that it recreates so much of what I loved about those early years of this genre.

I do like the new twist thrown in which has alternate endings of Good and Bad cop depending on how you act during the game for now enemies, when stunned, can be arrested instead of knocked out. Arresting an enemy will reward the player with a more Good cop status as well as food to replenish health where finishing them off will give a Bad cop status and no food. It is a quirky addition as a feature to suddenly remember to stop mashing the attack button in order to perform the arrest and for the most part, this was far too clumsy to really rely on as the button to arrest is also the grab enemy button so many times I would go to arrest someone only to grab them instead. But these are interesting twists to the old style and are welcome as attempts to add more modern elements to the game and genre. 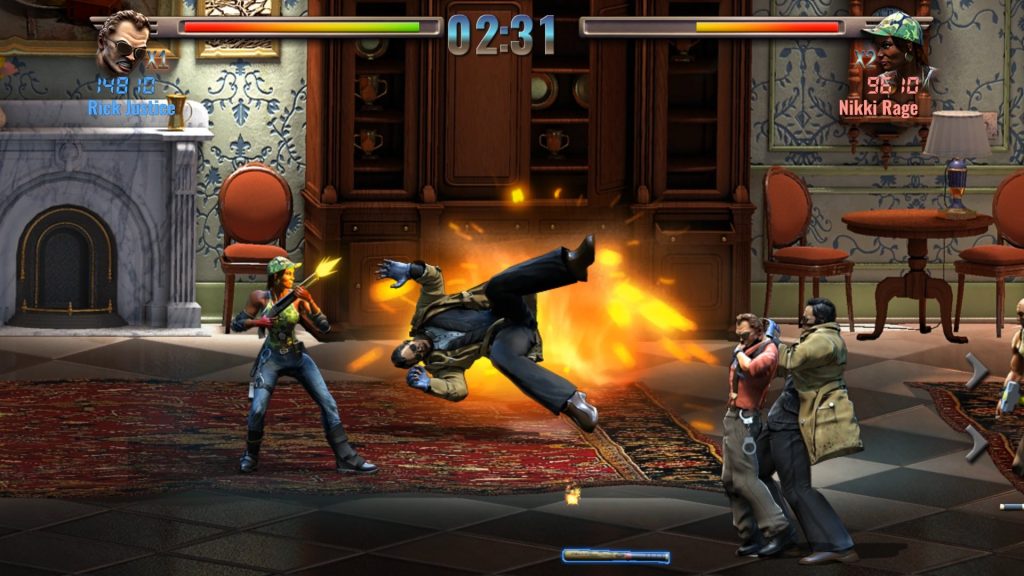 The difficulty spikes at times can be frustrating especially when you get trapped by multiple enemies who can easily catch you with their attacks taking away huge chucks of your health bar. There is a dodge and charge move to clear enemies with the classic special move, which costs some of your health bar to execute, a good way of clearing up close enemies. The boss fights as well have that old school ‘cheap git’ element to them and most of the time I had to use many of the games continue credits to keep the fight going till I took them down. It meant a lot of those big boss fights ended up being a button mash session which for me just felt a little meh to end that level that way. If playing in local co-op, this game and these battles become very different and again, just transported me back to the days of using my pocket money along with a friend to play Final Fight and Double Dragon back in the day.

Raging Justice does successfully bring this genre back to a modern audience but I feel this is a game that will fair better with old school gamers like me who grew up with this genre. So many elements are instantly recognisable and great to see once again and overall this game really is a blast with co-op despite the at times clumsy execution. Does it do enough to refresh the genre of side scrolling beat em ups, well not really. Sadly it spends far more time reusing all the familiar gameplay mechanics which are fun to play with but overall it simply borrows from too many and just uses them. The arrest feature and Good/Bad cop endings is a nice twist but I came way wanting to revisit those classics rather than expecting or hoping for a Raging Justice 2.

It has been great going back in time to a genre I loved growing up and would generally like to see make a full comeback. Raging Justice does open the door and as an ode to what came before it certainly succeeds. It just fails to really do enough to be anything more than a tribute to the genre then a ground breaking reintroduction of it to a new audience.

Sean McCarthy
Freelance writer but also a Gamer, Gooner, Jedi, Whovian, Spartan, Son of Batman, Assassin and Legend. Can be found playing on PS4 and Xbox One Twitter @CockneyCharmer
Previous articleWelcome to the OnePlus 6 with a 6.28 inch display
Next articleZAP THE LOVE – The Unofficial Augmented Reality Powered Royal Wedding Merchv