It might not seem like a big milestone, but Sega seemed intent on emphasising the fact that the first Sonic game was released 26 years, when it was promoting the releases of Sonic Mania and Sonic Forces. It turns out that Sonic Mania was a successful experiment, so it was down to Sonic Forces to hopefully close out the all year round celebrations on a high note.

Have you ever wondered what it would have been liked to play a video-game version of those dreadful Sonic cartoons from the 90s? Then wonder no more because the story for Sonic Forces feels like it’s been plucked straight out of a Sonic Underground (cartoon where Sonic moonlighted in a band with his siblings whilst fighting bad guys) episode. The idea is that the nefarious Dr Robotnik has finally managed to not only knock out Sonic, but keep him a prisoner for months and take over the world – sadly the game doesn’t demonstrate what torture Sonic endured during this time. Instead, it focuses on the ever expanding group of supporting characters as they come together to form a resistance to push back Dr Robotnik’s invasion and rescue Sonic.

One of the biggest issues with how the story develops is how the characters tend to deliver their lines of dialogue in a tone that makes it seem like they are working a dead end job. This makes it very difficult to find the whole idea of a resistance believable since the characters don’t make much of an effort to demonstrate why their struggle to overcome the enemy forces would be so great that a resistance was even needed in the first place – it’s as if they are helpless without Sonic around.

The much advertised avatar character looks bizarre and out of place whenever he/she is around the main cast. Each avatar character can equip different powers, but the way that the avatar moves is clunky and is reminiscent of early 3D platform titles and the powers, such as a flamethrower, wouldn’t look out of place in such (now) basic titles. Not that the other two playable characters, modern and classic Sonic, are any better since their own moves don’t feel as reliable as they were in previous titles.

The levels themselves are decent enough and make use of average level design, even if it’s fairly simple compared to previous Sonic titles. What is shocking is how short most of these levels are to the point that completing the main story will require no more than three or four hours. The lack of frequent frustrating pitfalls and other serious issues that have plagued modern Sonic titles is welcome, but it comes at a cost of making it seem like the title is being played by the game at times with minimal input from players. 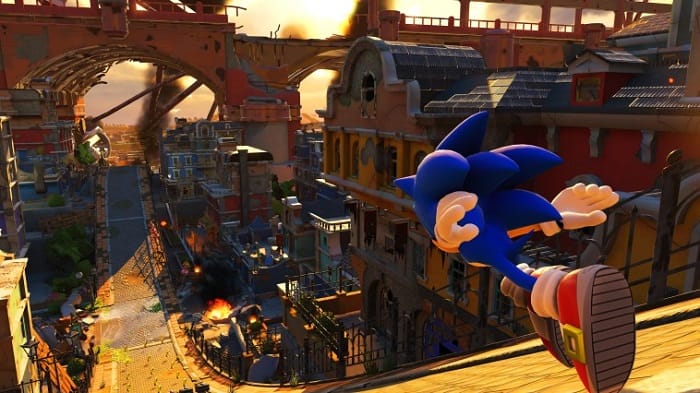 Then there is the fact that it’s necessary to dismiss prompts for new avatar clothes whenever finishing a level for the first time and/or completing certain requirements. This probably wouldn’t be so noticeable if it wasn’t for the fact that it only takes one/two minutes to complete most levels and the simple level design makes it less appealing to even consider replaying levels.

There is a very dim light at the end of the tunnel and it comes in the form of extra levels that become unlocked with progress. Unfortunately, these additional challenges, like puzzles, come long after the title has turned into a chore for most players. Unsurprisingly, the levels that stand out the most are the ones that make use of classic Sonic and his side-scrolling platform antics. Sadly, the title’s decision to constantly switch between all three characters means that even the fonder memories of playing some classic Sonic levels are soon tainted by mediocre levels from the other two characters.

In its defence, Sonic Forces does try to integrate some new ideas, such as a move where two characters can team up to unleash a devastating attack. Yet most of these ideas don’t feel essential or like they add anything that could evolve the franchise in a meaningful manner. It’s clever of Sega to make it seem like this is a successor to the fantastic journey down memory lane that was Sonic Generations, but Sonic Forces feels more similar to Sonic Lost World, both story and visuals wise. 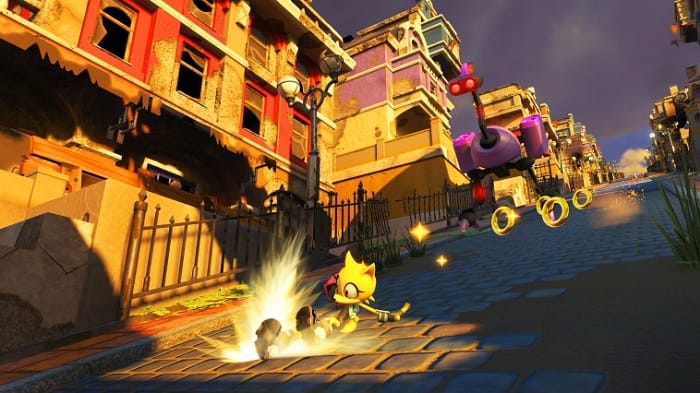 The addition of yet another teenager angst themed enemy called Infinite just goes to show that it might be time to rethink the strategy for modern Sonic games yet again. The locations for the title are also uninspiring and lack the colourful visuals that Sonic titles tend to be known for. Bizarrely enough, one of the few highlights of playing this title comes in the form of its catchy, if outdated, soundtrack that wouldn’t look out of place in the 90s Sonic R racing game or even a nightclub playing Europop music.

At times playing Sonic Forces feels like the equivalent of witnessing a disaster. You want to look away as the metaphorical pileup of cars continues to increase, but it’s difficult to not be perplexed by its determination to continue no matter what.

It’s not as disastrous as some of Sonic’s previous adventures and yet it’s also so bland that it’s difficult to pinpoint any emotions felt whilst playing it. At least the 2006 Sonic game manages to evoke anger and confusion on many occasions. Fittingly enough its cheaper price point seems to indicate that even Sega wasn’t keen on the idea of asking for too much from even the most hardcore of Sonic fans.

If Sega wishes to appeal to more than just Sonic’s dwindling fan base, then it needs to put on more of an effort and really think about what is best for the franchise moving forward. In its released state, Sonic Forces is a collection of fairly short levels that are barely held together by a weak narrative for the mercifully brief amount of time that it takes to complete it.