The Wolfenstein series is certainly something very special indeed and when it was brought back into modern times with ‘The New Order’ and ‘The Old Blood’ it absolutely woke up an other wise stagnant First Person Shooter genre with a firm kick up the backside. That said, from a story point of view I really could not see where the series could go next in terms of story with the shocking ending to The New Order which saw our main hero and all round “haha Doomguy needs armour” hero William ‘B.J.’ Blazkowicz sacrifice himself to save his team and put an end to the evil Deathshead. But of course this is Wolfenstein so anything is possible for Terror Billy!

When you are someone who grew up to remember actually playing the very first titles in the Wolfenstein, to play the now modern counterparts is always a treat. The first 30 minutes of those titles not only set the tone but instantly put you back into the world with a bang and Wolfenstein 2: The New Colossus is no exception as the story quickly picks up with William being rescued by his friends as the Deathshead Fortress is finally blown up. However our hero is in a very sorry state indeed and we catch up with William who was placed in a coma for five months to help him recover, waking up to find Anya very heavily pregnant and being told that the only way to save his life was to remove several of his vital organs leaving him basically…broken.

So what can you do when your main hero is now really physically unable to continue the fight, a fight against the Nazi’s who for those unaware that Wolfenstein is set in an alternative timeline where the Nazi’s basically won WW2 after they dropped an Atom bomb on America stopping them from joining the allies and now dominate the world. Well to my astonishment the game handles this in a very simple way. With William now confined to a wheelchair all you have to do to put him back in the fight is to just…well….give him a gun. The opening to the game literally has William fighting Nazis in a wheelchair and just let that sink in, William rolling about a ship taking out Nazis like a boss. 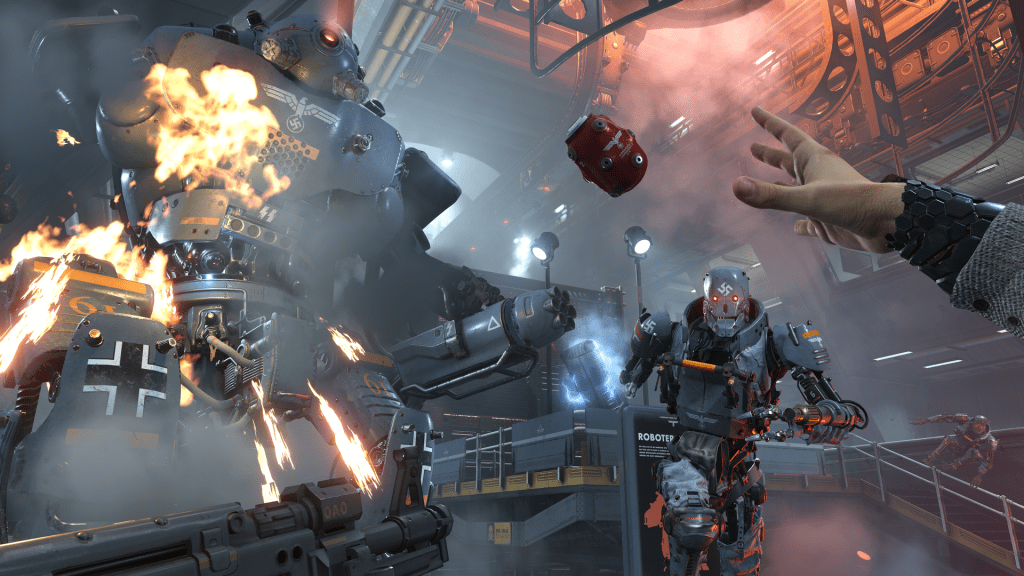 This is just one of many incredible batshit crazy moments in the game which I have no intention of spoiling for any readers but believe me, some of the most standout gaming moments of this year came from playing this game. The cinematic cut-scenes also play a much bigger role this time for me as we see life for the resistance unfold in-between the missions featuring some of the best writing and voice acting this genre has seen in years quite frankly. Now some FPS which have a very serious story-line in their main campaign do put that extra effort into cut scenes that drive the story forward but in The New Colossus, there is just so much going on in them with visual slap stick humour to very on the nose language and dialogue exchanges that each one ends up being something rather special. I had so many laugh out loud moments and I mean eye watering belly laughing with some of the cut scenes which just have no business being as good in an FPS but that extra effort instantly make this the benchmark for such things.

It should also be said that despite the slapstick humour blended into the story telling, it also very much about dealing with strong and powerful cultural themes when it comes to the Nazis and the time setting of the 1960s. The language used at times is very much unforgiving with certain scenes actually making me feel a little uncomfortable at times with racism an underlining theme threaded throughout the story when the main villainous Nazi characters get an opportunity to talk away. The violence itself is often very graphic but unlike in DOOM when tearing apart hell spawn and demons makes it rather video gamey, here it is very much in your face and visceral at times. But it is all in line with the tone of the story and series and though at times it can be close to disturbing levels of brutality and language, it never glorifies or celebrates it to any real extent and to see just how dangerous and abhorrent a Nazi ran world would be certainly delivers a message to the player and audience. 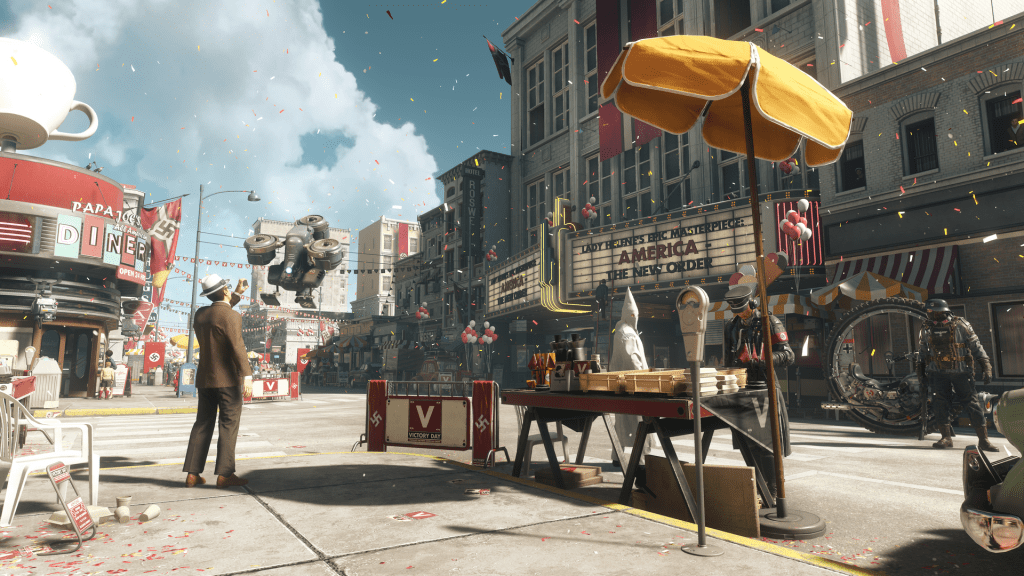 Gameplay wise little has really changed from the previous games at its core, though new special abilities are available later in the game to change it up a little. You can still dual wield weapons whilst using upgrade kits to improve weapons as you progress. I do feel that the recent DOOM has certainly had an influence here as to me at least, The New Colossus has moments which entice you and even to an extent force you to go full on “Two Guns time” in fights where the enemy comes at you think and fast and the only real way to survive the encounter is to just grab two guns and throw down in a fight. I did feel that the stealth side to the gameplay is sacrificed at points with certain sections deliberately making it close to impossible to go full stealth either because the slightest noise will alert everyone around including the Officer who will just raise the alarm anyway. I do love how the music, much like in DOOM, starts to build up to the point the action really kicks in and there are plenty of set pieces throughout the story that are just exhilarating but there are times when the game does decide to just screw you over either by swarming you with enemies or just ramping up the difficulty at that very moment. These can break the flow and stop you in your tracks until you finally win the fight and I did have a few ragey moments as a result.

Collectibles are everywhere and you will need more than a couple of play-throughs to grab them all, but for me the surprising highlight has to be the Enigma Machine, which by using the codes dropped by killing Officers to decrypt signals, will highlight high value target locations on each of areas you play-through during the game. Now I only really looked into this once I had completed the main story but to find out I still had more to do was an awesome surprise and I just love the additional gameplay of finding these targets and taking them out. With no Multiplayer, everything is centred on given as much single player content to do and there is so much to do even before the planned DLC content arrives which at time of writing has already started to release. 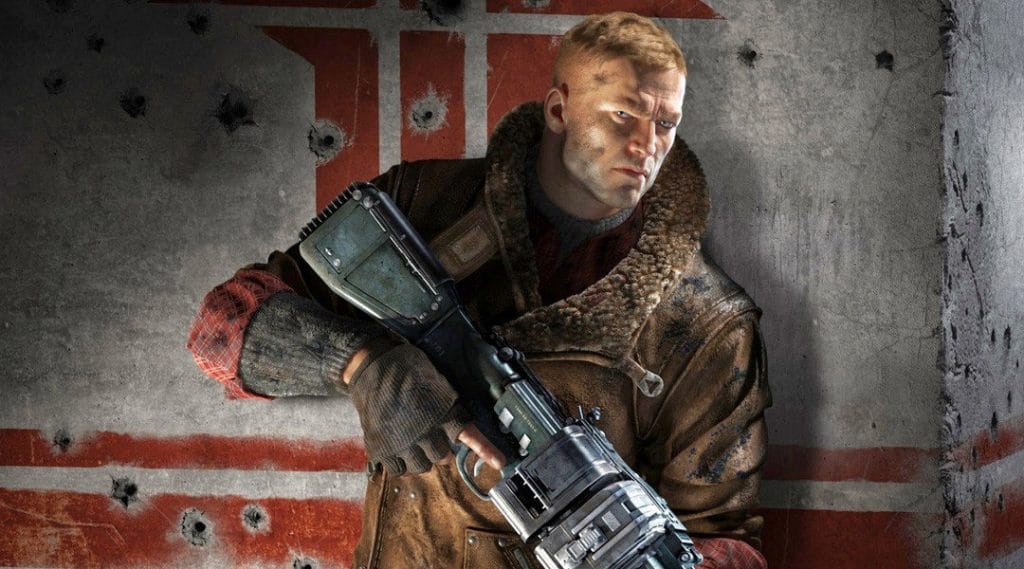 Wolfenstein 2: The New Colossus is easily my favourite shooter of 2017, it just ticks so many boxes for me and managed to both continue and improve on the series which for me as I said above, I honestly thought was done with The New Order. There is always something to do and the story itself of trying to ignite a revolution in the now Nazi controlled America is refreshing with some amazing moments threaded throughout. To have even more things to do once the main story is completed is just icing on the cake but this game delivered on a whole new level I genuinely did not expect it to. This has to go in your collection if you are an FPS fan and if like me you are a fan of Wolfenstein, this game delivers everything you would want, hope for and need from the series.

I just cannot recommend this game more, it left me breathless at times despite Hulk level rage moments but also true smiles and laugh out loud moments that instantly made me jump back into the action once the very epic end game credits finished, and is without doubt one of my top five games of 2017!

We have finally reached the final normal...
Read more
Gaming