Despicable Me 3 Q & A with Miranda Cosgrove

In Despicable Me 3, actor-singer-songwriter, Miranda Cosgrove (iCarly) returns to the world of Minion mayhem. As the voice of Margo, eldest daughter of Gru & Lucy (Steve Carell and Kristen Wiig), she finds herself in the series’ latest installment on an extended family vacation – visiting Gru’s long-lost twin brother, Dru in the wacky world of Freedonia – when her parents lose their jobs at the Anti Villain League. 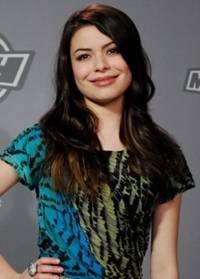 Discovered by a talent agent when she was 3-years-old, LA native, Miranda Cosgrove, is best known for her starring role as Carly Shay on the hit Nickelodeon series, iCarly (2007-2012). She made her film debut in 2003 opposite Jack Black in School of Rock, and voiced the character of Margo in the first Despicable Me (2010) and its 2013 sequel, Despicable Me 2, for which she received a Kids’ Choice Award for Favourite Voice from an Animated Movie.

Q: Where did we last leave your character, Margo, and where do we find her now?

A: In Despicable Me 2, Margo has a huge crush on a boy, but that doesn’t really work out because Gru doesn’t want her to like boys. Of course, it also turns out that the boy’s father is a super villain which doesn’t help either (laughs). That’s kind of where her love life left off. And then in this movie she has another encounter with a possible love interest, but she’s not exactly excited about it (laughs).

Q: Was your dad overprotective with you, growing up, like Gru?

A: Oh yeah. My dad is like Gru in a way (laughs). Even now, he doesn’t get excited if I’m going on a date or something. He’ll just ask little questions, here and there. I guess it’s just a thing dads do. They never want to see their daughters grow up.

Q: What’s it been like for you playing this character over the course of so many years?

A: It’s cool. When I started I was 14, and the character is 11 or 12, so it wasn’t that much of a stretch. Now I’m 24. It’s a big difference. But I guess I’m kind of lucky, because my voice still sounds the same. And it’s fun to get to use your imagination in the booth and channel being that age again.

A: No, I wouldn’t say it’s hard, especially because the directors are so cool. They make it really easy, coming up with so many ideas on the spot.

Q: The series ranks amongst the most successful animated movies ever released. Why do you think they’re so popular?

A: I think it’s two things. First, there are the Minions. It’s hard not to enjoy watching them do what they do. And then also because each film has been about family, especially with the first film centring on Gru becoming a better person by adopting the three girls.

Q: What was it like making that first film?

A: It’s funny; one of the things I remember loving the most when I started, was their crazy looking dog (laughs). I don’t think I realized when I was just hearing about the story how crazy some of the animation was going to be. It wasn’t until maybe halfway through filming the first one that I even got to see pictures of the Minions. I don’t think I even knew they were going to be in the first film.

Q: So, in a sense, it should be somewhat easier making the films as you go along?

A: I think it is. It’s just really comfortable and easy now.

Q: Tell me a little bit about working with Pierre Coffin, who in addition to having a hand in directing all the films in franchise, also voices the Minions.

A: He is just so cool. And I’ve enjoyed getting to know him. Still, it’s funny. I’ve seen him at premieres and stuff, but mainly getting to know him has always been over Skype, because they do all the animation in Paris. The directors Skype-in and I talk to them inside of the little recording booth, where I can hear them in my headset. It’s funny getting to know somebody really well that way. But it works really well.

Q: How long does a typical Despicable Me recording session take?

A: Not very long, but they are spread out.  I’ve been in about 12 or 13 times for this movie over the course of the last three years. But every time I came in, it was less than an hour. It’s not too intense or crazy. I’m sure Steve Carell stays much longer (laughs)…

Q: Did you ever get to record with Steve or Kristen Wiig?

A: No, we actually all record separately. But I got to know Steve Carell pretty well, just from doing the publicity for the films and from meeting him over the years, and he is just super cool. One of the funniest people I’ve ever met. I’ve really enjoyed getting to know him.

Q: Tell us about the new Minion in DM3.

A: Well, my personal favourite Minion is still Bob, the one who has different coloured eyes. I actually have a toy Bob. So for me, he’s kind of the sweetest, the most loveable. And Mel is now the second. I really like him too. It’s kind of like a love-hate relationship between him and Gru in this movie. I thought it was funny how he’s the one leading all the other Minions to stray from Gru, to try to find somebody who really wants to be a villain still, but then in the end he’s the one who misses Gru the most. It was so cute.

Q: Did you get to keep any toys or collectables from the film?

A: So much stuff! But my dog’s absolute favourite toy, it’s not a dog toy, but after the first film, they came out with a pink version of the dog that’s in the movie. And my dog is obsessed with that toy. If I take the toy out of her toy box, she gets all excited. She loves it.

Q: You received a Kids’ Choice Award in 2014 for your work in DM2. How important are younger audiences for you today and awards like the Kids’ Choice?

A: It’s an honor. I think it’s definitely cool that the kids get to vote and they get to pick their favourites. They’re in charge and they rule that whole award show, and I like that. You know it’s really fun to be a part of something like this – I mean, I’ve even met 3 and 4-year-olds, and that’s also been awesome too – to see how happy it makes little kids.

Q: Do older kids often connect you with the character?

A: They come up to me and ask for pictures and sometimes and they’ll say, “I know you’re Margo in Despicable Me”. It’s like they know a secret (laughs). But I can kind of relate to that because when I was a kid and went to see animated movies, I’d try to figure out who the voices were too.

Q: I read that you started working when you were 3-years-old. Is that true?

A: Yes. An agent came up to my parents at a food festival here in LA when I was 3, and I started going on commercial additions and things like that. But I didn’t do much until I was maybe 8.

Q: Do you ever miss the iCarly gang?

A: Well, my best friend is Jennette McCurdy, who was on iCarly with me. I saw her last night. So I don’t miss her, because I see her every day (laughs). But everybody else, for sure. I only get to see them once in a while. I definitely miss them.

Q: I understand you’re studying for a degree now?

A: Yes – I’m going to USC (University of Southern California) and have a year or so left. I’m studying film and screenwriting.

Q: How does it all fit in with your work schedule?

A: Basically it’s been really easy, because I haven’t ever done both at the same time. I’m either at school or taking a semester off to act.

Q: And your music?

A: I think I’m leaning more towards acting now. I love comedy, and I’d love to be on a good comedy TV show. I still like music too. I think that’s why I like the show Crazy Ex-Girlfriend. It’s one of my favorites. It’s a comedy and she also sings in it. I think if I were to sing again, it’d be fun to do something comedic.

Q: Are there plans for more Despicable Me films? Would you be up for DM4?

A: I don’t know if there are any plans, but I would be completely up for it. I’ve had a great time making all three movies. I mean, I think it could be fun to see the girls help Gru and Lucy now that they’re a kind of a family of superheroes.

Andrew Edneyhttp://moviesgamesandtech.com
I am the owner and editor of this site. I have been interested in gadgets and tech since I was a little kid. I have also written a number of books on various tech subjects. I also blog for The Huffington Post and for FHM. And I am honoured to be a Microsoft MVP since January 2008 - again this year as an Xbox MVP.
Previous articleChristmas presents ideas for all Tech Lovers for 2017
Next articleXbox One X officially launches in the UK so I went to my local Game store

Back in September 2019, the LEGO Group launched its first-ever mixed reality range called LEGO Hidden Side, here is our review of the new Newbury Subway set that just launched.
Read more
Movies & TV

We have finally reached the final normal...
Read more