When a game has had its release delayed multiple times, there is always a worry that when it finally releases, it will have problems. But there is some small amount of hope that the delays were worth it and the game has been polished and is ready to be released to the expecting public. But with Sniper Ghost Warrior 3 it was obvious from early reviews that it was sadly the first reality, that it had multiple issues especially on PlayStation 4, some very much game breaking. So when I was given the chance to finally try the game for myself I kept my expectations low and I am both glad and disappointed to say that those low expectations were justified.

Going to start off by saying that Sniper Ghost Warrior has plenty of issues, some are game-breaking, others are just eye rolling baffling as to how someone thought that was a good direction to take. But before I go into them, I do want to talk about some of the game that I actually enjoyed and felt actually worked well because whilst it is not all bad for this game, it just was not enough to save it.

The main story follows Marine Captain Jonathon North, who along with his older brother Robert, are sent to the Ukraine-Russian border to destroy Bio Weapon stockpiles who are at risk of being taken by terrorists. Acting as both a tutorial and prologue to the main story, it sets the scene as the brothers successfully complete the mission only to be ambushed by a group of Special Forces soldiers led by a man called Vasilisk, resulting in the capture of Robert but Jonathon is knocked unconscious and left behind and alive. 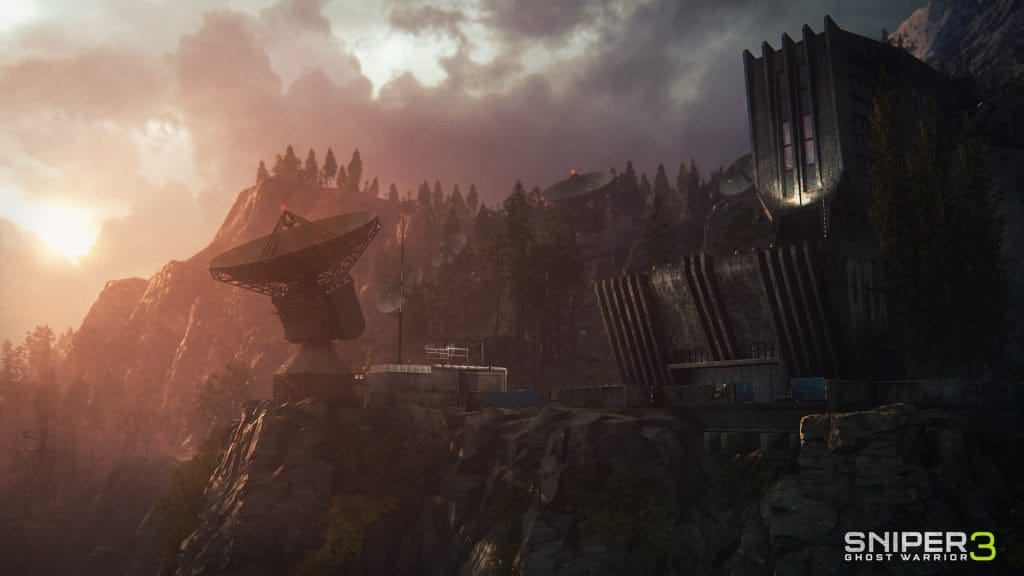 The story picks up two years later with Jonathon now sent into Georgia on a mission to try and destabilise Separatist cells which are rising in strength and wealth and have become an ongoing concern for authorities. Of course the story has to have that little extra emotional arc running through it and our hero Jonathon has an ulterior motive for taking on this mission. He has heard intelligence sources reporting that his brother Robert is still alive and is in Georgia, so whilst he is has a main objective, his real goal is to locate and rescue his big brother.

The story really feels as though it would make a great straight to DVD movie for either Steven Segal or Jean Claude Van Damme with how it sounds and plays out during the four acts that make up the main campaign. The dialogue in cut-scenes and between characters is cringe worthy at best with the voice acting more wooden at times than the forests you sneak about through whilst on missions. It makes trying to immerse yourself as the main hero in the game and story quite difficult. One thing that does try to make it easier is the new game-world style that CI Games have adopted for this third installment. Complaints about earlier games in the series were that they suffered from being far too linear, but now an open world has been used which is far to say is pretty much taken from Far Cry. Freedom to explore, take side missions outside the main story campaign adds more gameplay for the player and using a day and night cycle which the player can use a rest feature in the safe house to either do missions in the day time or sleep till the night to tackle missions under the cover of darkness.

Jon is basically a one man army, and whilst he has help from side characters such as his handler, former love interest and Georgian Sniper Lydia and a Mossad Operative Raquel, who bares more than a passing resemblance to MARVEL’s Black Widow in look and attitude. The side cast never feels believable however with some really inane conversations between Jon and Lydia about their past that feels like a really forced narrative in the breaks between missions. I did enjoy the flashback scenes where we see the brothers growing up with Robert as the older brother and soldier heavily influencing his younger brother Jon who is showing tremendous talent as a sniper. The story of the brothers is interesting enough to keep my attention but the rest is just noise and clutter.

I do like the gameplay which as I said feels far more Far Cry in its approach and style. I also like that you can craft your own weapons, ammunition and kit in the safe house and that whilst on mission, looting enemy bodies does not result in a handful of ammo. This means depending on your choice of weapon load-out, you can run out of ammo for a weapon on mission, forcing you to change strategy. I also like the missions themselves which can be anything from taking out a camp of enemy soldiers to infiltrating a base area to gain intelligence or to help disrupt enemy forces to gain favour with local resistance. So the game has aspects that I do enjoy, but when the issues it has just envelope the good things, it just become a frustrating mess.

On the first reviews for Sniper Ghost Warrior 3 on PlayStation 4, the load times became its own social media joke but it is one that definitely becomes less funny when it happens to you whilst playing. It literally takes up to five minutes to start the game and then to move to a different region in the game. The theme song, which sounds like a rejected Eurovision Contest contender, actually plays completely through twice during the loading screen, and it is a song you really do not want to hear for that length of time. I struggle to understand how or why the loading is this terrible for a game in 2017, it is such an annoyance and completely takes you out of the game experience. As you play main campaign missions, you can be sent to a new or previous region to continue and boom, five minute loading screen and annoying song which then after it loads, will play audio from the mission briefing whilst the theme song is still playing so you miss most of it.

For a game that is called ‘Sniper Ghost Warrior’ it is equally baffling just how many times the sniper part gets thrown out of the gameplay and you are expected to play it like any other first person shooter title. A mission may start with doing some reconnaissance using your drone to tag enemies or objectives but then the game will encourage you and even make it unfeasible to do actual sniping. Which is a shame because the sniping part is really the most fun, finding your target and taking them out is satisfying despite the bullet time kill animation often feels rather weak and underwhelming. There are issues with target range as well, I actually experienced enemies that were tagged suddenly not appearing when I zoomed in with my sniper rifle only to reappear if I sent my drone back up, which is just nuts.

Then you have the crashes, which when they occur, can will take the game with it forcing a restart, another five minute loading time and discovering that all progress on that mission was lost. It became so infuriating that when I first attempted to stream the game, it crashed on me on three occasions in a ninety minute period. Hit detection on weapons can also be hit and miss at times, especially with pistols up close barely doing any damage leading to that enemy turning around, raising the alarm and shooting me dead. Worse was during one early mission to take out a target on the local Hit List of criminals, I moved to a sniping location that kept me away from enemy patrols, using my drone to spot the enemy beforehand so I could pick a position giving me great line of sight for a long range shot only for the shot, which was right on the money, failing to go through the glass window where the target was standing. Buildings have a nice level of detail but if you are going to make players wait five full minutes for the world to load, if you are going to take the time to put boxes and lockers in enemy locations with padlocks, and fail to make them fully enough so the player can interact with them,  so when a player tries to shoot a lock off to loot it only to find its just a drawing of a padlock, it just breaks the world again. 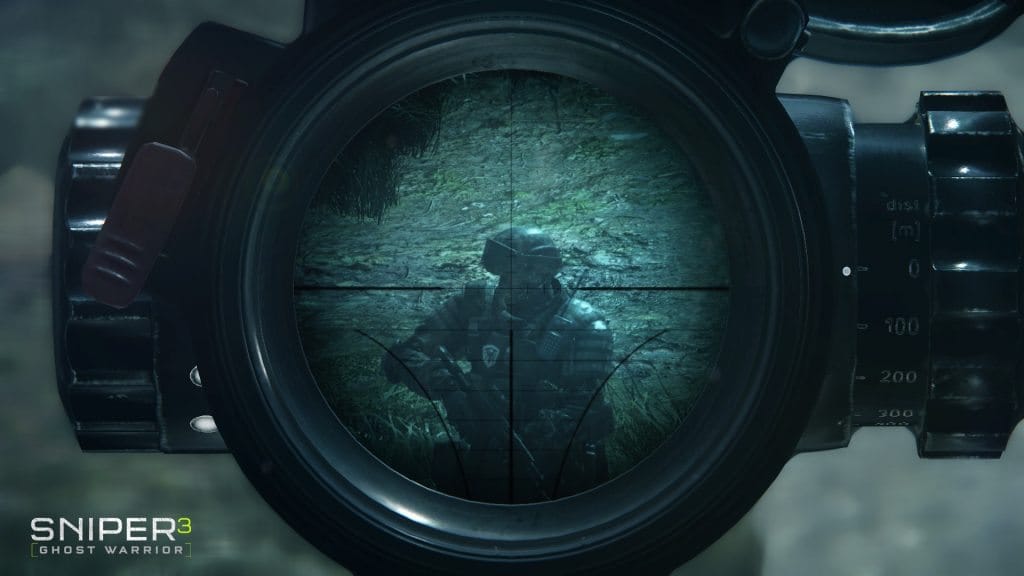 Sadly this comes down to the problems and issues being far too large in numbers and game experience breaking to be forgiven for the good it does. After three delays it still seems as though Sniper Ghost Warrior 3 was not ready for release, in fact the planned multiplayer side is still in the ‘coming soon’ list that along with unacceptable load times and crashes on PlayStation 4 make this game a firm contender for the naught step. It should have been in a much better and optimised state to be released. It has the feeling that it was a “get it out and fix it later” mentality that is truly annoying to gamers right now. The main story missions become tedious after a while and with ever increasing deadpan character interactions in cut scenes, it is a chore to plough through this instead of fun. Never knowing how far you will get before a game crash wipes out your progress in that mission is beyond frustrating.

Time will tell if CI Games can get updates out to correct issues and fix the loading times but right now, this is a game heading straight to bargain bucket territory and that is the only time and pricing that should be considered before picking this up. Which is a shame because you can genuinely see the steps taken to add a new level to this series with this game, but being ambitious but rubbish is not a great way to make video games.

Sean McCarthy
Freelance writer but also a Gamer, Gooner, Jedi, Whovian, Spartan, Son of Batman, Assassin and Legend. Can be found playing on PS4 and Xbox One Twitter @CockneyCharmer
Previous articleStars of TV, Film and Sport come together for Collectormania 24
Next articleReview: Troll and I