To celebrate the release of Swiss Army Man on DVD and Blu-ray, we are giving away a Lionsgate Comedy DVD bundle. 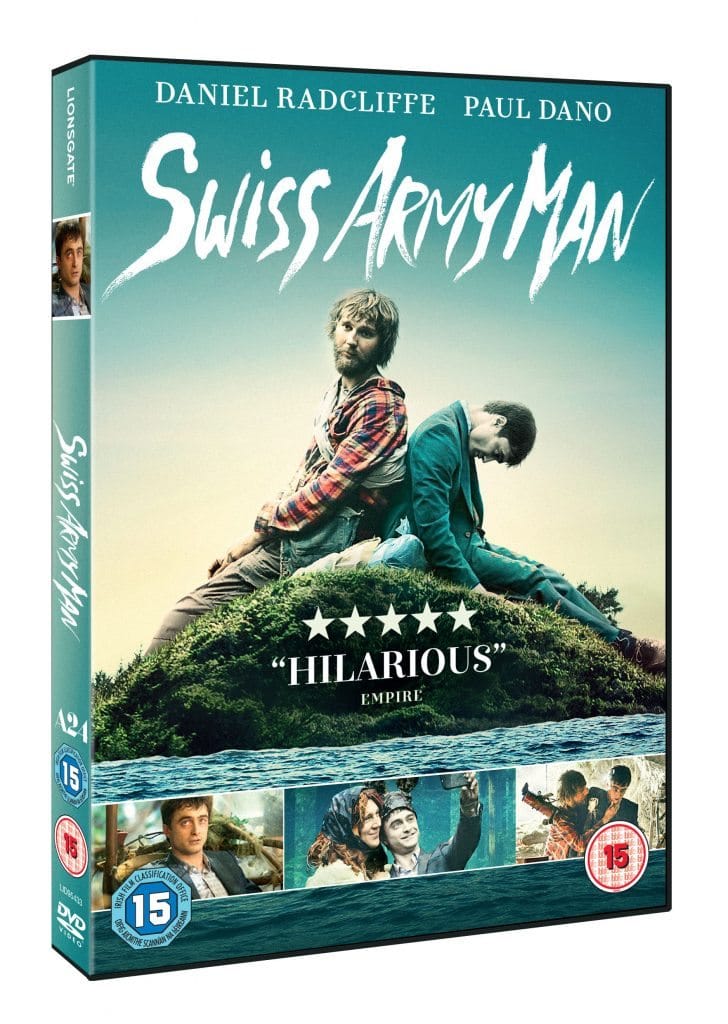 Bursting with limitless creativity, Swiss Army Man goes from the absurd to the emotional to the whimsical to the profound and back again. Hank (Paul Dano, There Will Be Blood) is stranded on a deserted island, having given up all hope of ever making it home again. Everything changes when a corpse named Manny (Daniel Radcliffe, Harry Potter) washes up on shore; the two become fast friends, and ultimately go on an epic adventure that will bring Hank back to the woman of his dreams.

Swiss Army Man creates a world like no other – a place of pure fantastical imagination, brimming with magical realism yet featuring two characters whose dreams and fears are entirely relatable. Dano and Radcliffe both fully commit to their directors’ audacious vision, and their work is exceptional, finding the perfect balance of humour and heart that drives the whole film. A celebration of all the wonders cinema has to offer, Swiss Army Man is a cultural phenomenon in the making – a surreal and wholly original examination of human vulnerability and connection that must be experienced.

Outrageously fun and deeply affecting, Swiss Army Man is a gonzo buddy comedy that is the feature film debut of acclaimed music video directors Daniel Scheinert and Daniel Kwan (collectively known as ‘Daniels’, and responsible for the visionary “Turn Down For What” video, among many others).

We have a Lionsgate Comedy DVD bundle to giveaway, including Dirty Grandpa, Eddie the Eagle, Sing Street, and Absolutely Anything.

Andrew Edneyhttps://moviesgamesandtech.com
I am the owner and editor of this site. I have been interested in gadgets and tech since I was a little kid. I have also written a number of books on various tech subjects. I also blog for The Huffington Post and for FHM. And I am honoured to be a Microsoft MVP since January 2008 - again this year as an Xbox MVP.
Previous articleBespoke Arcades announces a one of a kind arcade for Yooka-Laylee
Next articleStar Wars Ice Cube Tray from Funko UK