To celebrate the release of Billions on DVD, we have three copies to give away. 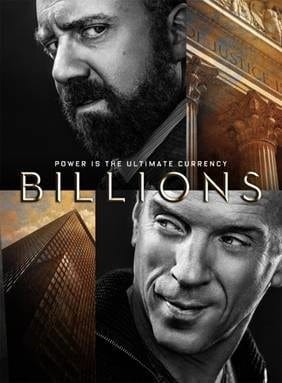 Emmy and Golden Globe® winners Paul Giamatti (Love And Mercy, The Ides Of March) and Damian Lewis (TV’s Homeland, Wolf Hall) star in this complex drama about power politics in the world of New York high finance. Shrewd, savvy US attorney Chuck Rhoades (Giamatti) and the brilliant, ambitious hedge fund king Bobby “Axe” Axelrod (Lewis) are on an explosive collision course, with each using all of his considerable smarts, power and influence to out- manoeuvre the other.

The stakes are in the billions in this timely, provocative series which also stars Malin Akkerman (Couples Retreat, Watchmen) and which provides incredible insight into the minds of the rich and powerful whilst also delivering edge-of-your-seat thrills and a view of how the other half live…

We have three copies of Billions to giveaway on DVD.

Andrew Edneyhttp://moviesgamesandtech.com
I am the owner and editor of this site. I have been interested in gadgets and tech since I was a little kid. I have also written a number of books on various tech subjects. I also blog for The Huffington Post and for FHM. And I am honoured to be a Microsoft MVP since January 2008 - again this year as an Xbox MVP.
Previous articleGet ready to buckle up for the teaser trailer for “Cars 3”
Next articleMelody the Musical Turtle from LeapFrog

In what is likely to become a...
Read more
Movies & TV

I am really enjoying the diversity of...
Read more
Movies & TV

To celebrate the release of Deathstroke: Knights & Dragons on digital download August 4th and DVD & Blu-Ray™ August 17th, we wanted to let you know a little more about one of DC’s lesser known characters.
Read more